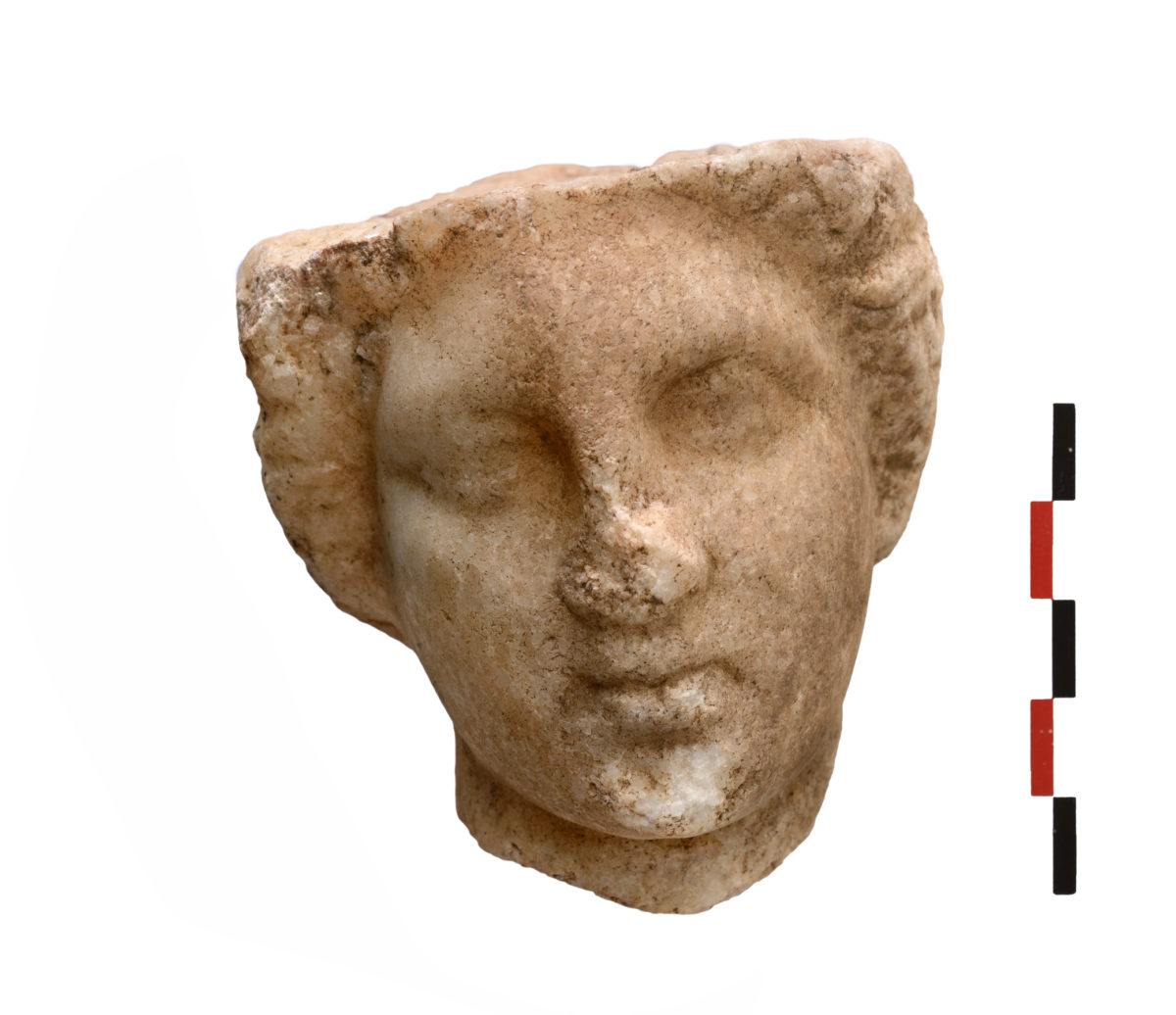 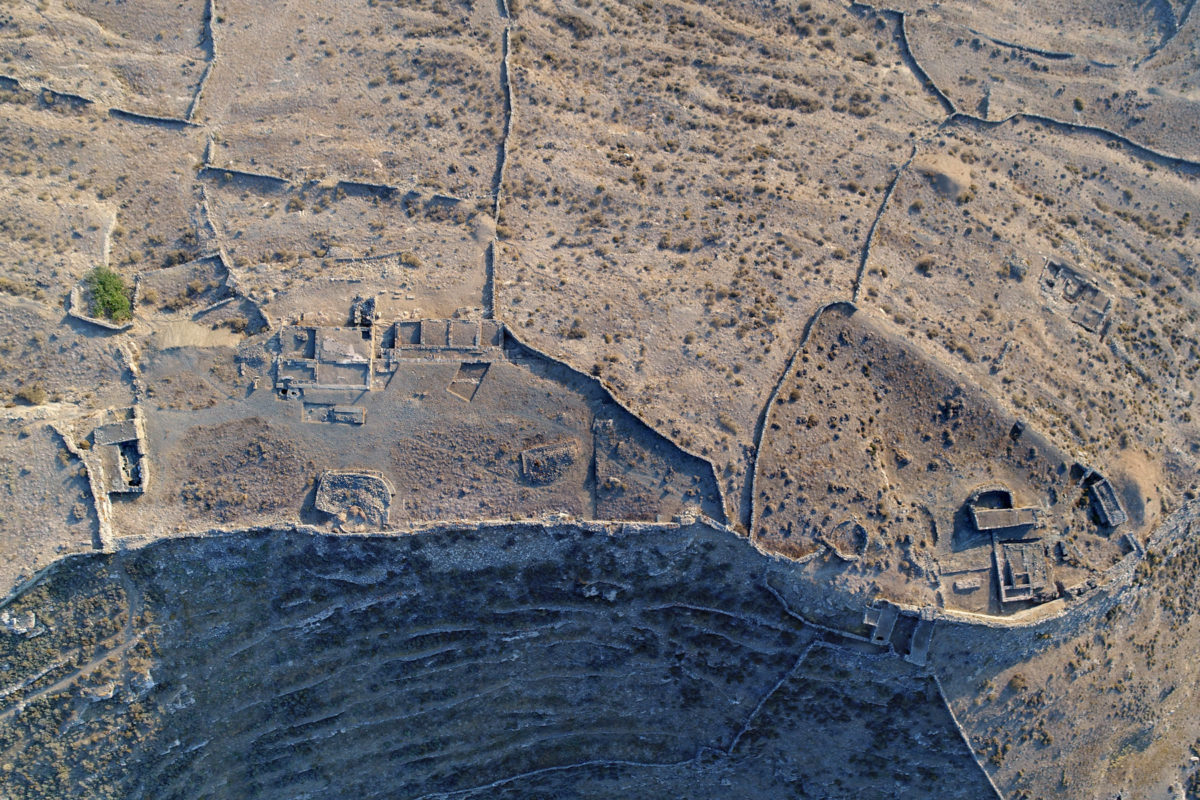 Among them a three-aisled basilica

Results were particularly impressive from this year’s systematic excavation of the ancient town of Kythnos (today’s Vryokastro) conducted from June 26 to August 4. Standing out among them are the finds from systematic excavations in the area of the ancient harbour, on the islet of “Vryokastraki” (the small island at the tip of the peninsular that, till Late Antiquity at least, must have been joined to the coast by a small isthmus).

A three-aisled basilica was discovered with a narthex and semicircular vault which has at least two construction phases; Early Christian and later (perhaps 7th-8th century). A building was also discovered almost 80m long which consists of a minimum of 15 rectangular rooms in a row and strong outer walls that most probably had defensive purposes, as well as two towers. Fragments of ceramics and obsidian tools from the Early Cycladic period were also found as well as dozens of rectangular spaces partly carved into the rock, which research to date shows that they had been in use up to Late Antiquity.

“It is the first time that there is evidence of an Early Cycladic settlement on the islet (editor’s note: 3rd millennium BC) […]. It is possible that some of the hewn spaces belong to that era. It is extremely significant that ceramics of the LH IIIC period (editor’s note:  12th c. BC) have been identified for the first time on Kythnos. It appears therefore that having been abandoned over a period of time, the site was inhabited again in the 12th century BC, perhaps uninterruptedly since then, as all chronological periods are represented by finds; from the Early Geometric era up to approximately the mid-7th century AD (the last dating according to the first conclusions reached by the study of Charicleia Diamanti) when the city was abandoned for good. Based on the surface survey’s findings, it was in fact initially thought and now confirmed that the islet was the nucleus of the ancient city when it was first inhabited and that it was here that the city limited itself in the Early Byzantine period, just before being abandoned for good and its remaining inhabitants moved to the fortified acropolis known today as the Castle of Oria”.

It should be noted that this year during the first two weeks, work was completed on the ancient cistern of the Upper Town of Vryokastro, while over the next four an excavation was conducted in the area of the ancient harbour, on the islet of “Vryokastraki”. At the same time, stabilization work was completed on the sanctuary of Apollo and Artemis (excavated in 2002-2006) by the conservator of the Ministry of Culture and Sports, Giorgos Karambalis.

More specifically, on the Middle Plateau in the Upper Town, attached to the south east corner of the religious Building 1 of Hellenistic times, there is a pear-shaped cistern carved into the rock which was researched systematically in 2016-2017. Numerous finds came to light such as marble sculptures and inscribed steles that identified the sanctuary as the Asclepeion and Aphrodision of the Kythnians. From the cistern’s bottom come many interesting finds such as an intact bronze bucket, as well as a large number of unpainted vessels for drawing water that are associated with its final period of use, during the Roman empire. ‟Out of the cistern’s rubble, this year also, came several pieces of the adjacent building’s superstructure, such as two roof tiles ending in an anthemion and fragments of Doric capitals and drums of columns made of conchite. Quite a few fragments of marble sculptures were retrieved; two intact heads of children among them (a boy and girl of the Classical era), a small head of  a Hellenistic Aphrodite and a clay head of Dimitra from a large scale statuette of the late Classical era” adds the announcement.

Regarding the three aisled basilica found in approximately the middle of the islet, its overall dimensions were announced as being 16×12.50 m, with access to the narthex by two side entrances.‟In a second phase, a vault must have been added to the east wall of the south aisle and an outbuilding was built against the north aisle measuring 5×3.60 m. On parts of the walls marble spolia can be distinguished” adds the announcement pointing out that ‟in all the backfills that were disturbed there was a strong presence of ceramics from the geometric era”.

In regards to the complex (Building 2) with at least 15 rooms, located east of the basilica, research showed that ‟The elongated outer walls of the complex are strong and relatively wide (about one meter)” which makes the excavators assume they served a defensive purpose as well. ‟In fact, approximately half way along the building a rectangular piece of wall juts out, 5.50m wide and 7m long which can undoubtedly be identified as a bastion or tower. A strong fortified construction (‘a tower’) was also discovered on the south end of the building complex” says the announcement among other things.

Lastly, on the islet’s south plateau, 23m above sea level, dozens of rectangular spaces were seen, partly carved into the rock, some of which looked as if they were semi-open-air.This year, four of them were explored while the last period of use of one of these was “determined as Late Antiquity, but there are signs here as well that the space’s original use goes back to an earlier age. Ceramics and obsidian tools of the Early Cycladic period were collected from cracks in the rocks while the backfills yielded ceramics from the end of the Bronze Age up to the Roman period. A few fragments of statuettes of the Classical era as well as miniature vases are perhaps evidence of a sanctuary close by” says the announcement.

Research is being supported by the Secretariat General for the Aegean and Island Policy, the Region of the Southern Aegean, the Municipality of Kythnos and primarily the generous sponsor Athanasios Martinos. The participation of archaeology students from the University of Thessaly and other universities was invaluable as was that of the volunteers of the speleological societies SPELEO and CHIRON.