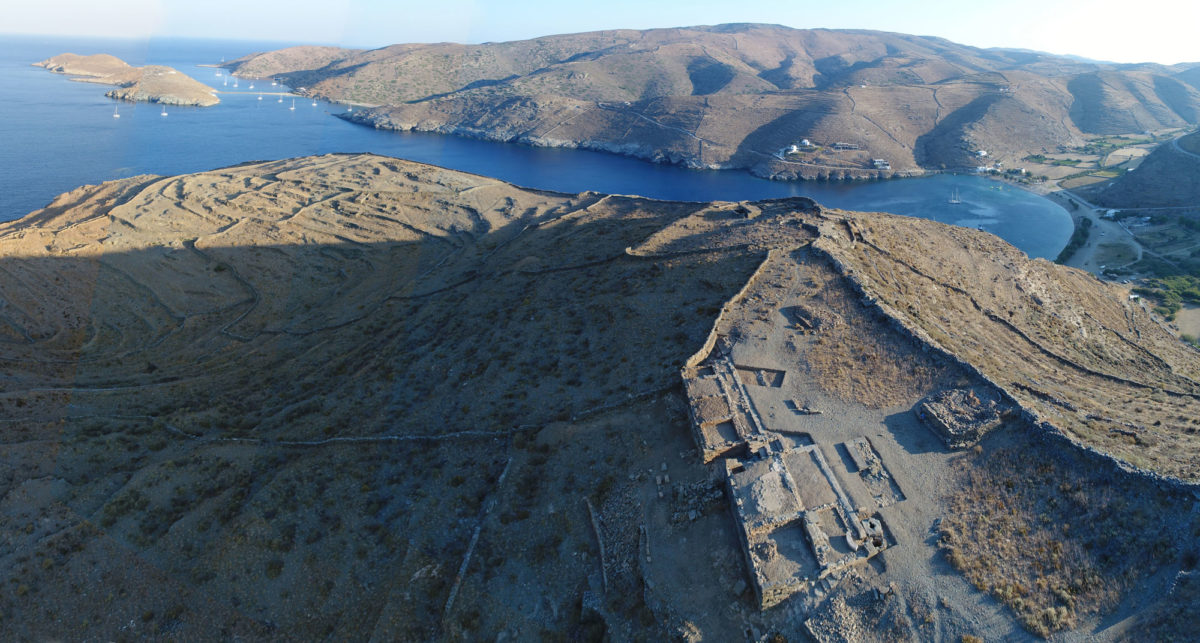 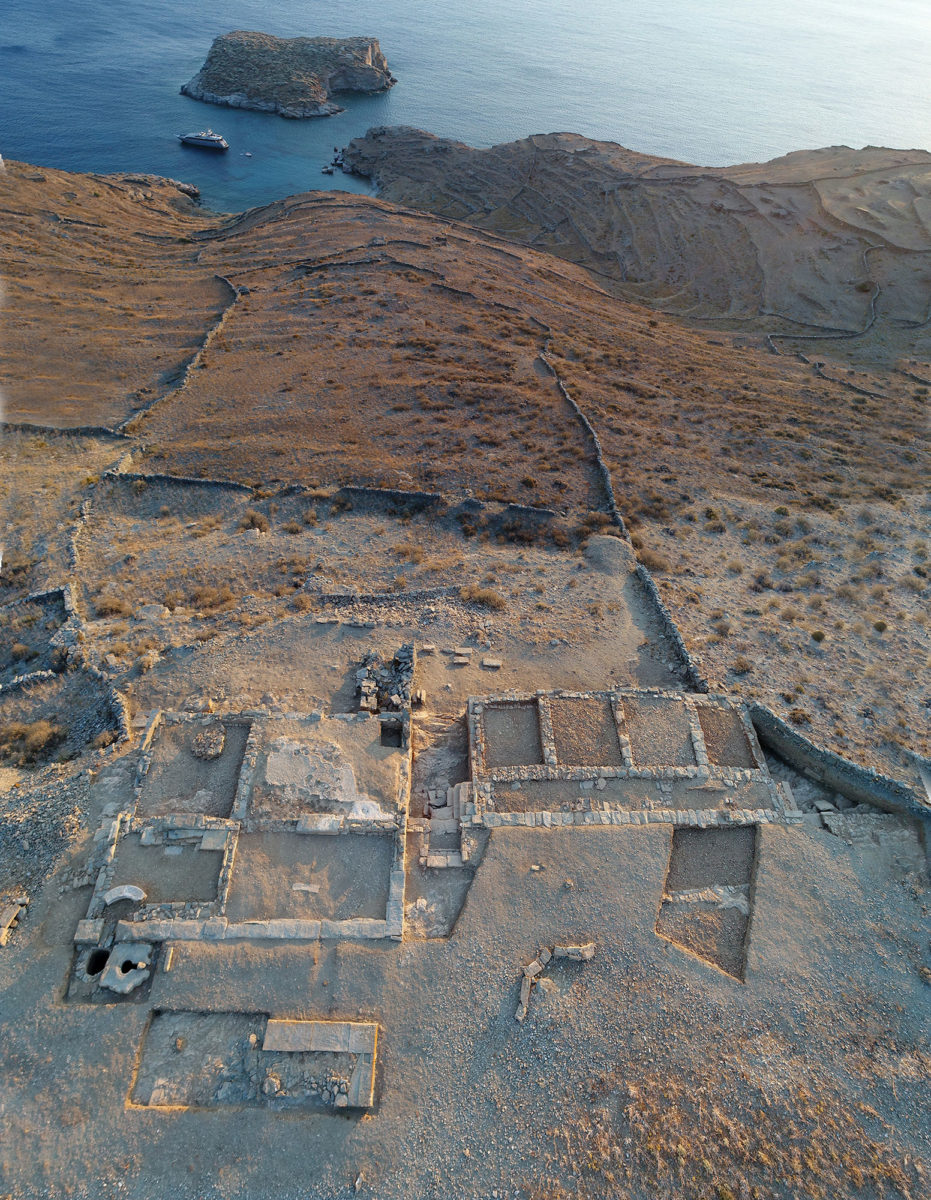 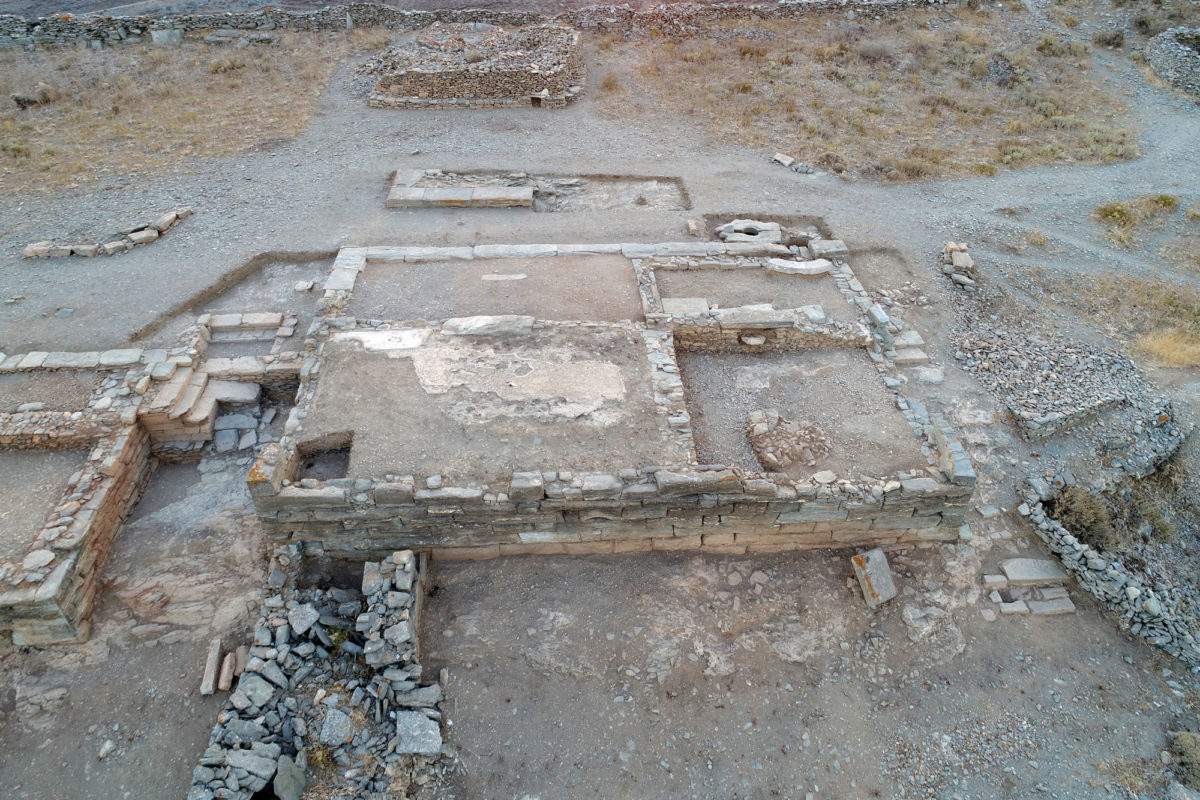 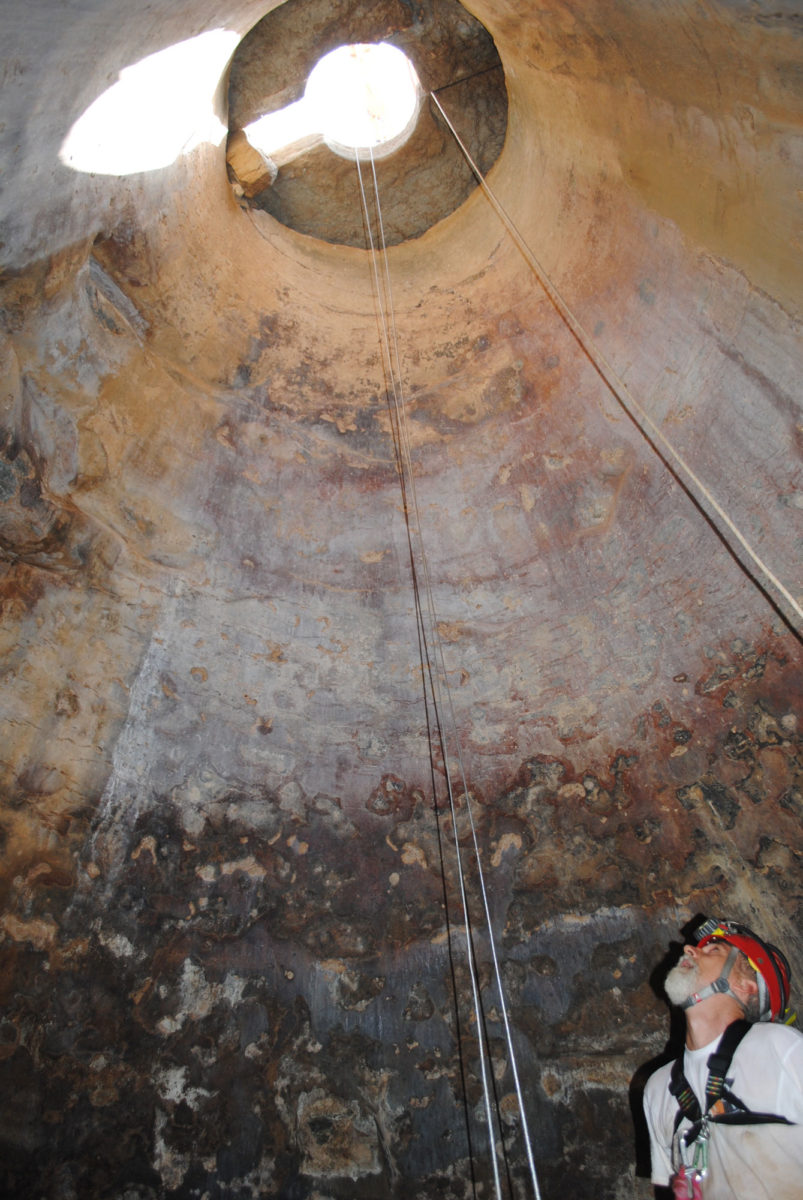 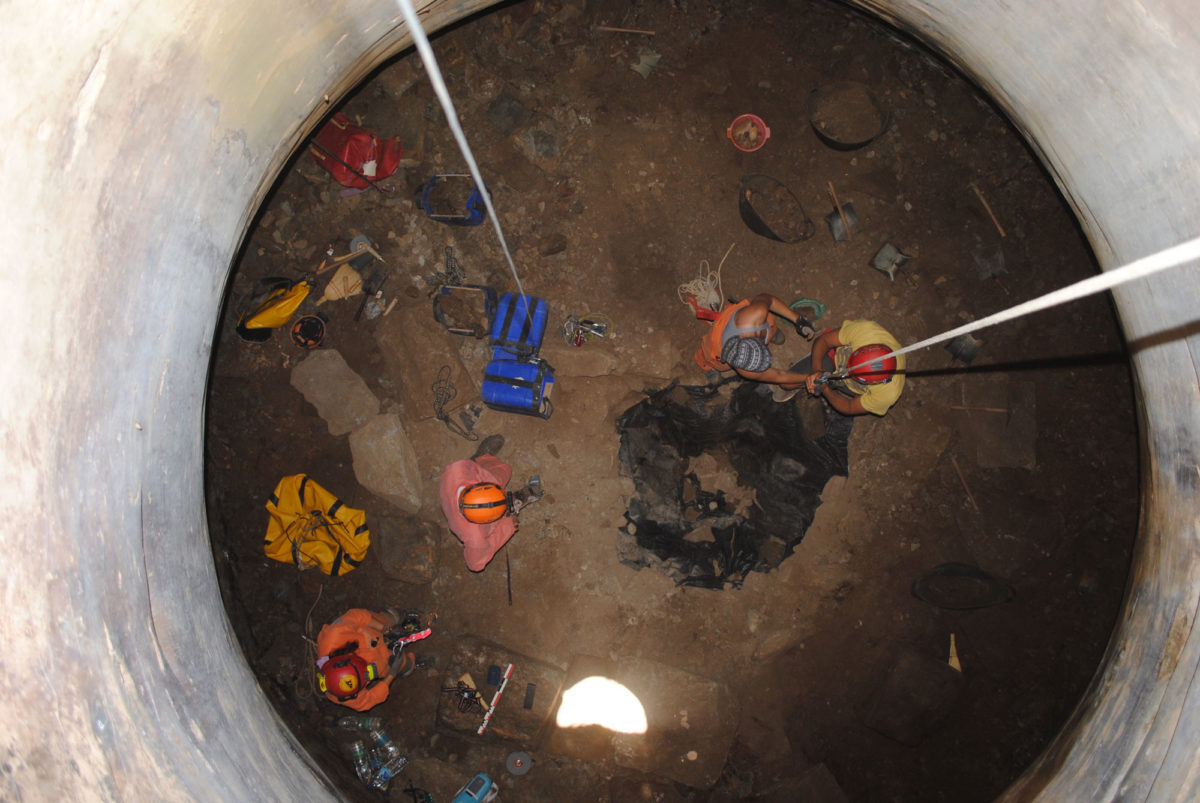 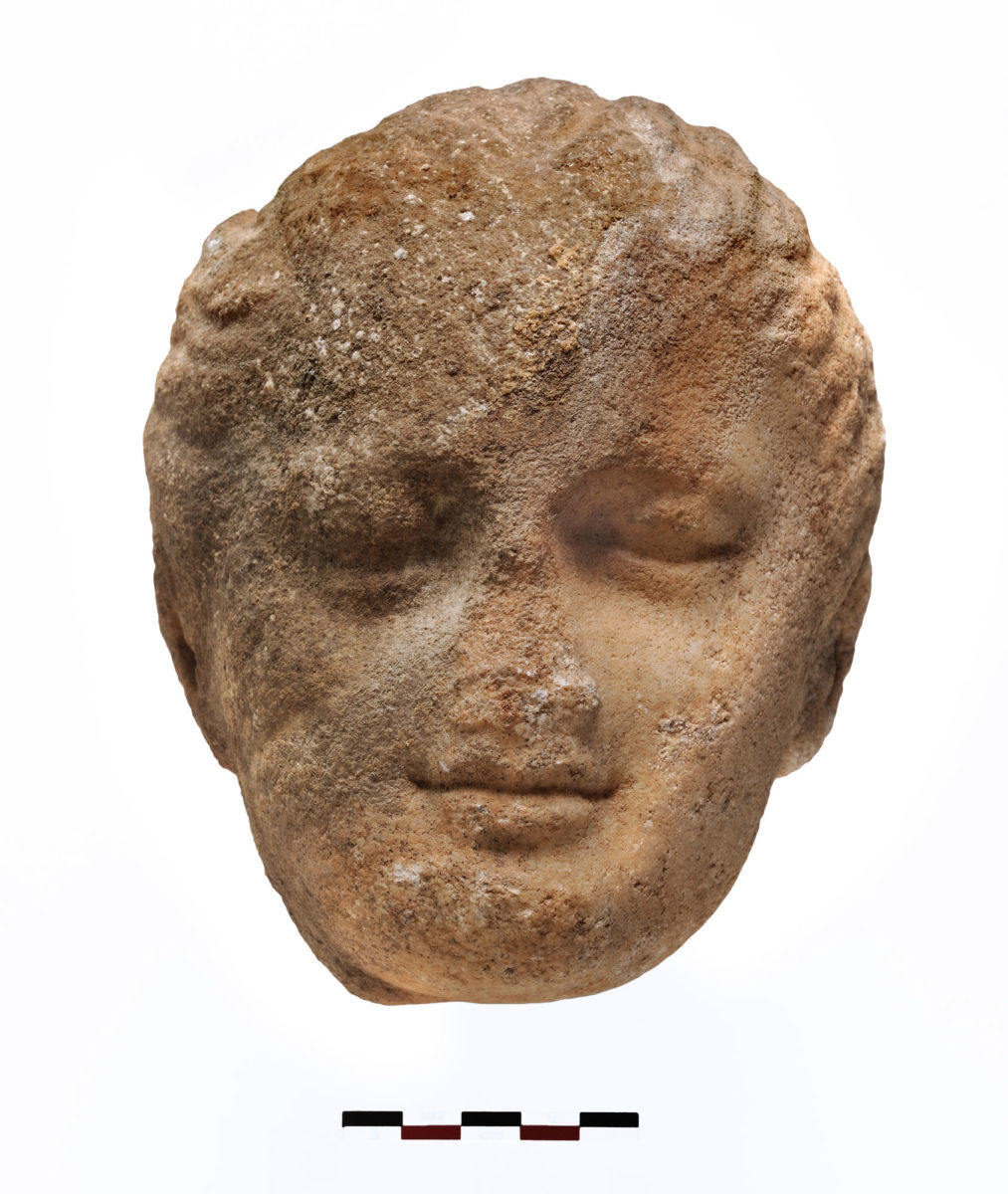 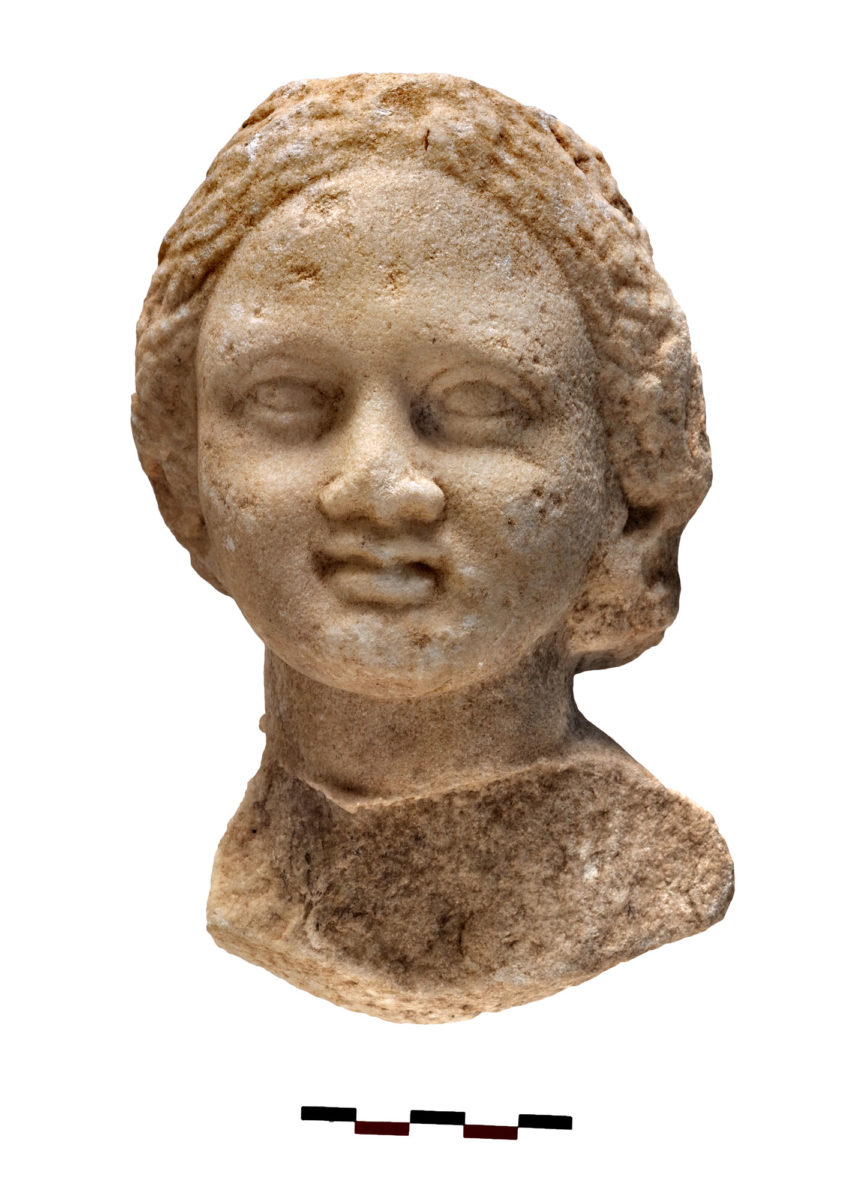 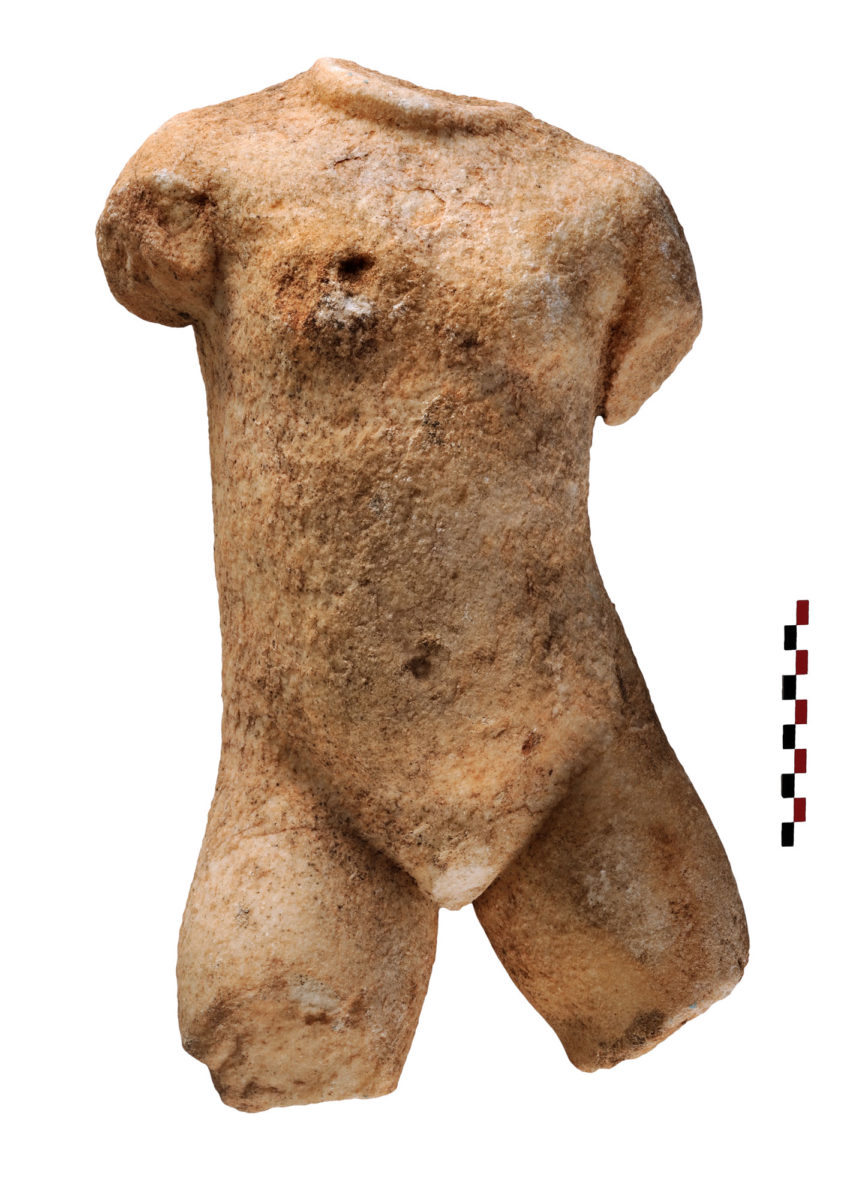 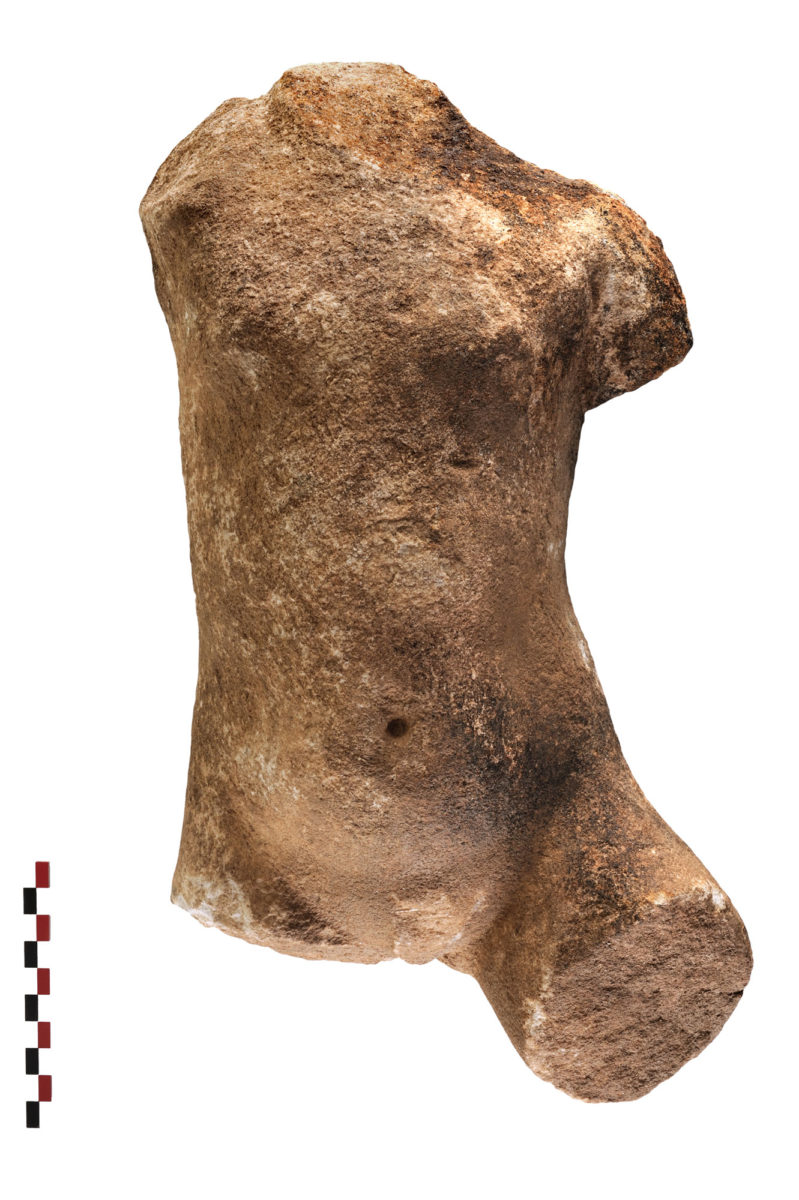 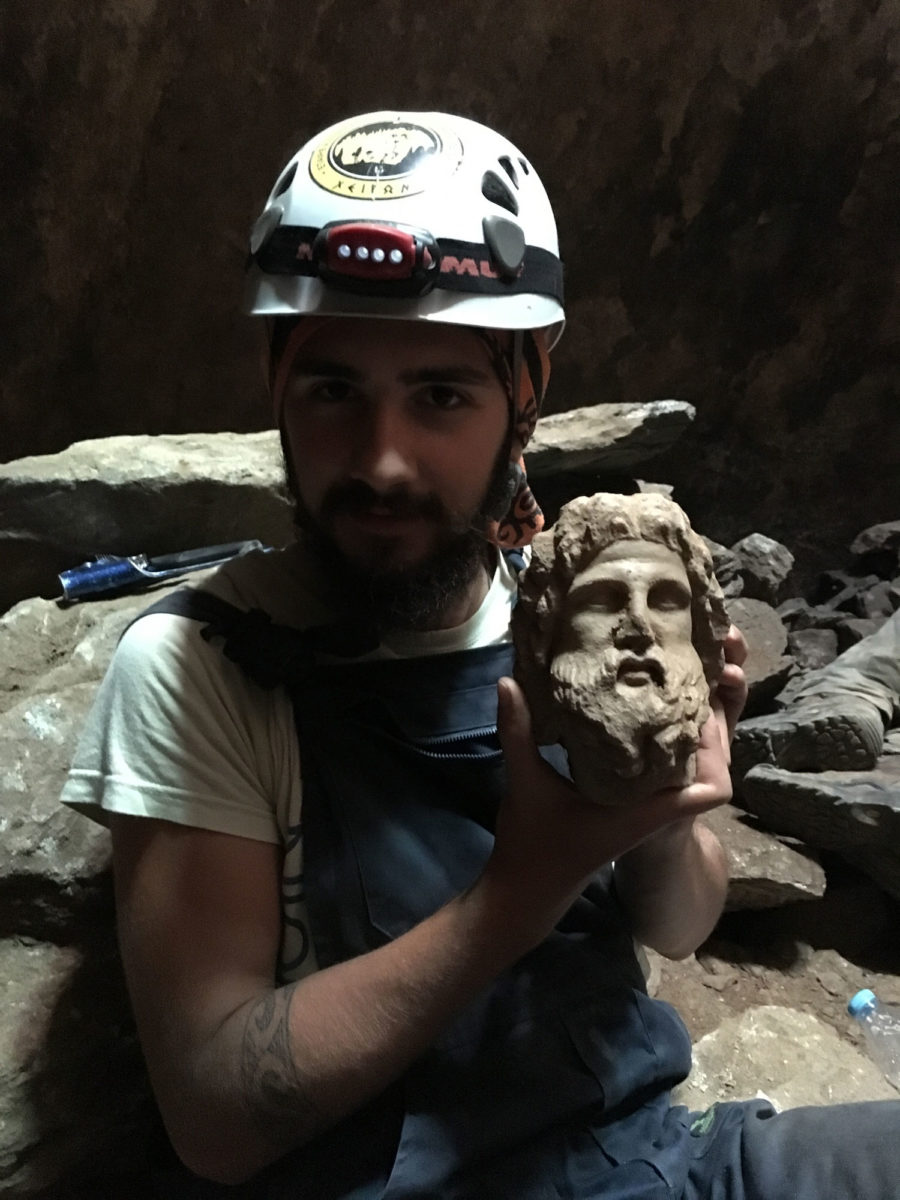 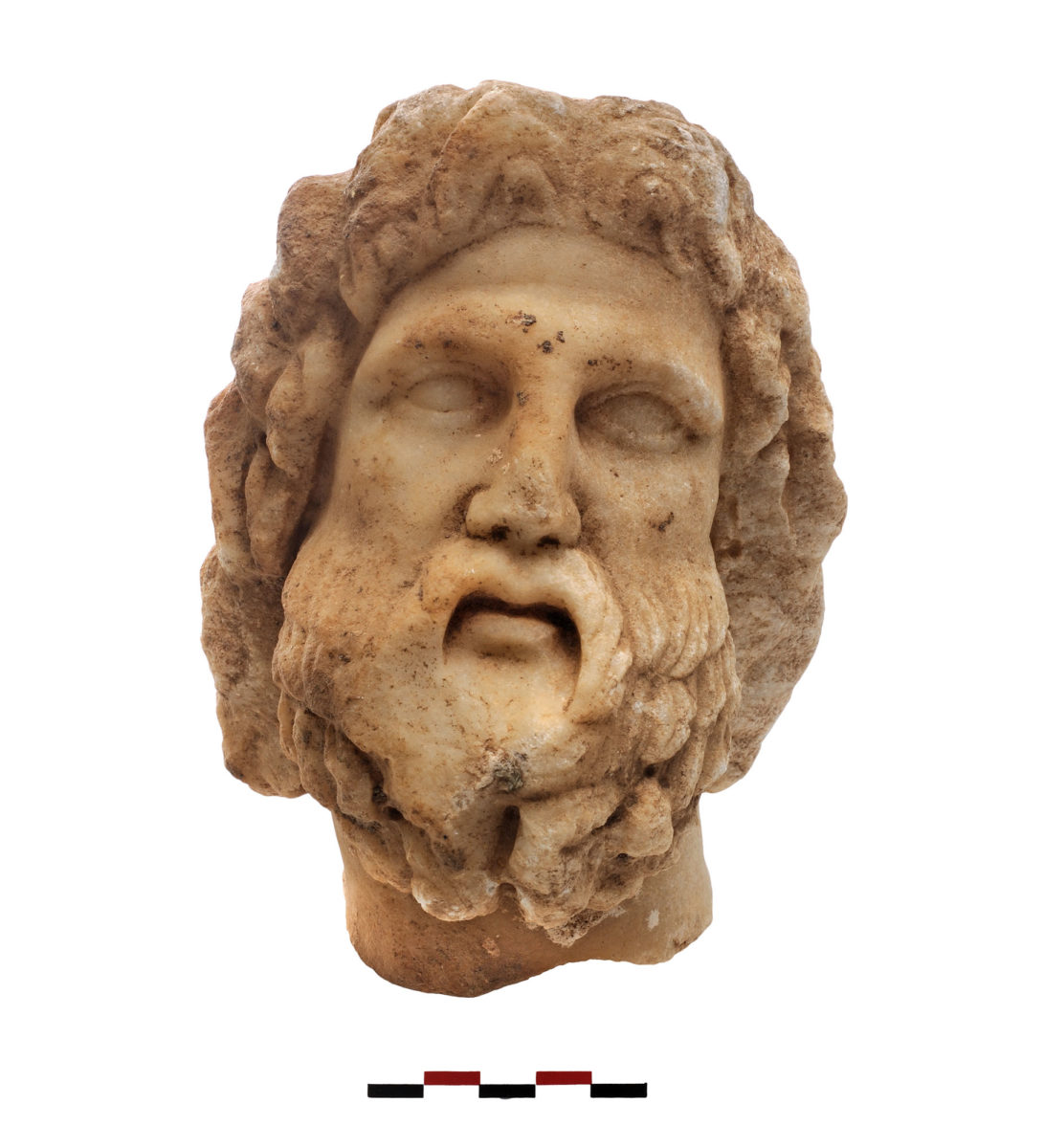 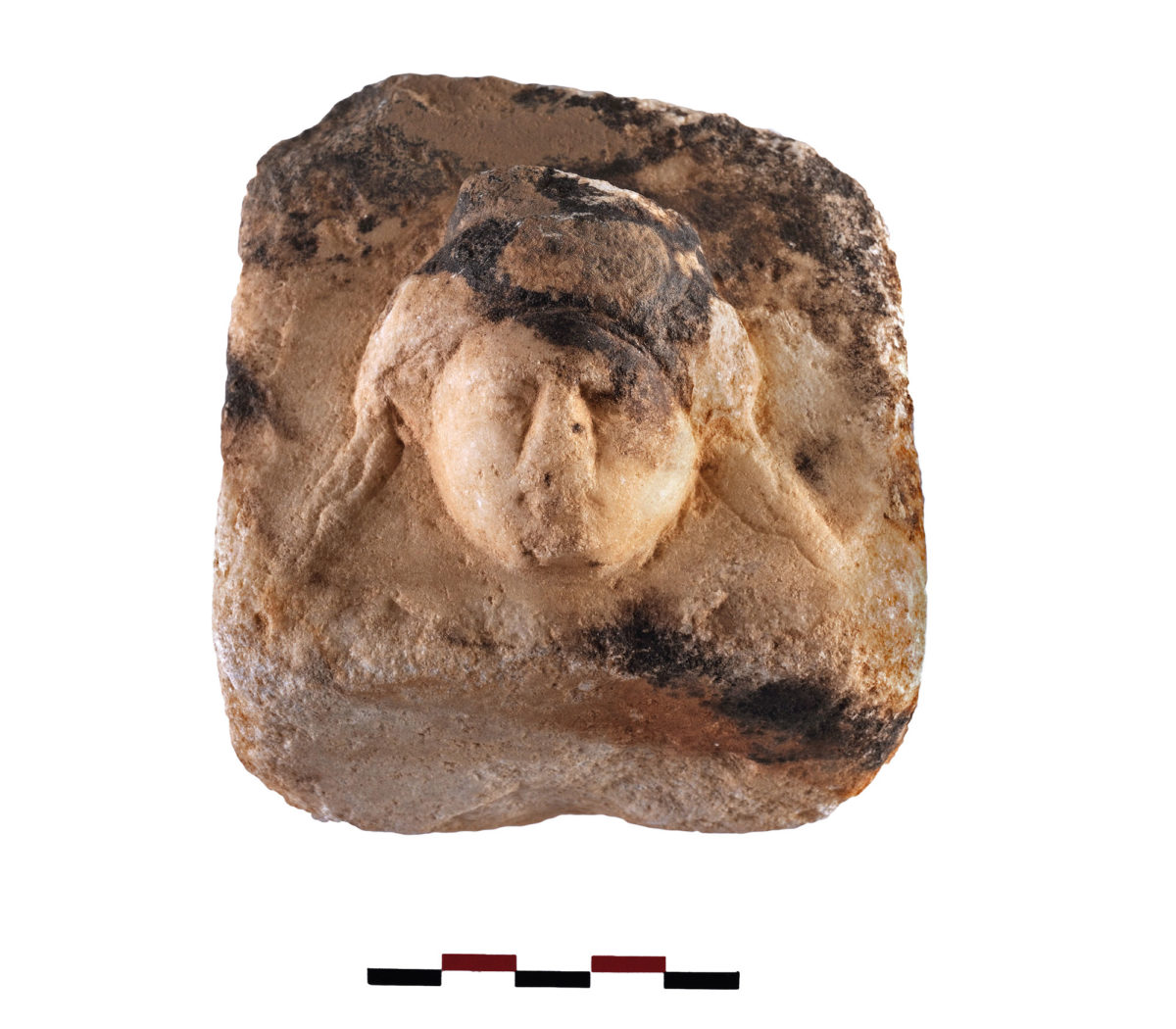 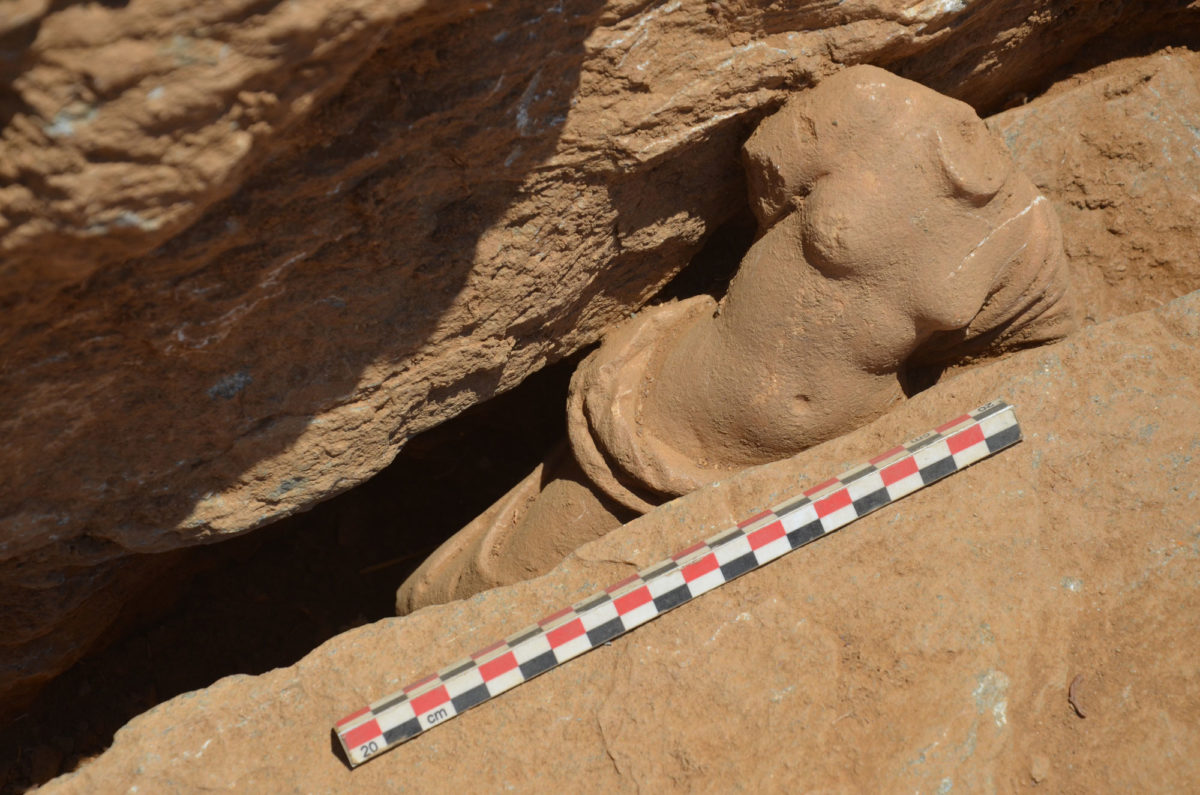 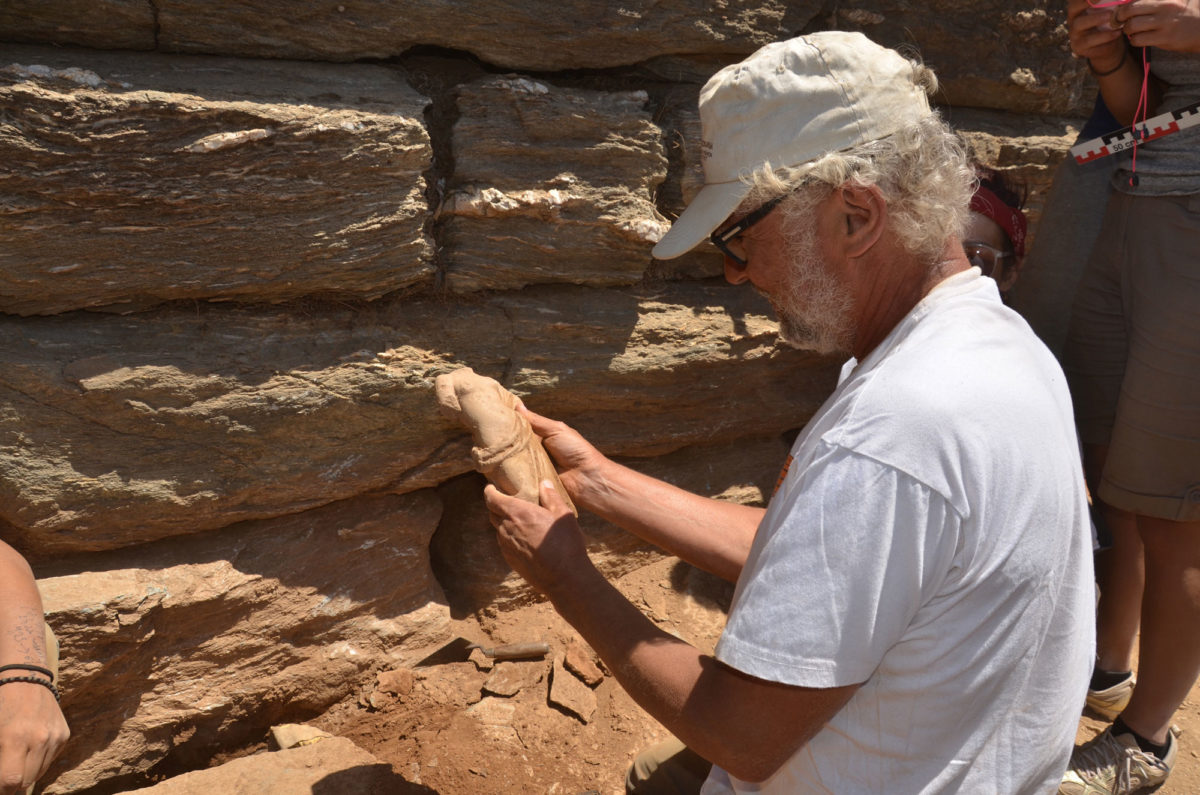 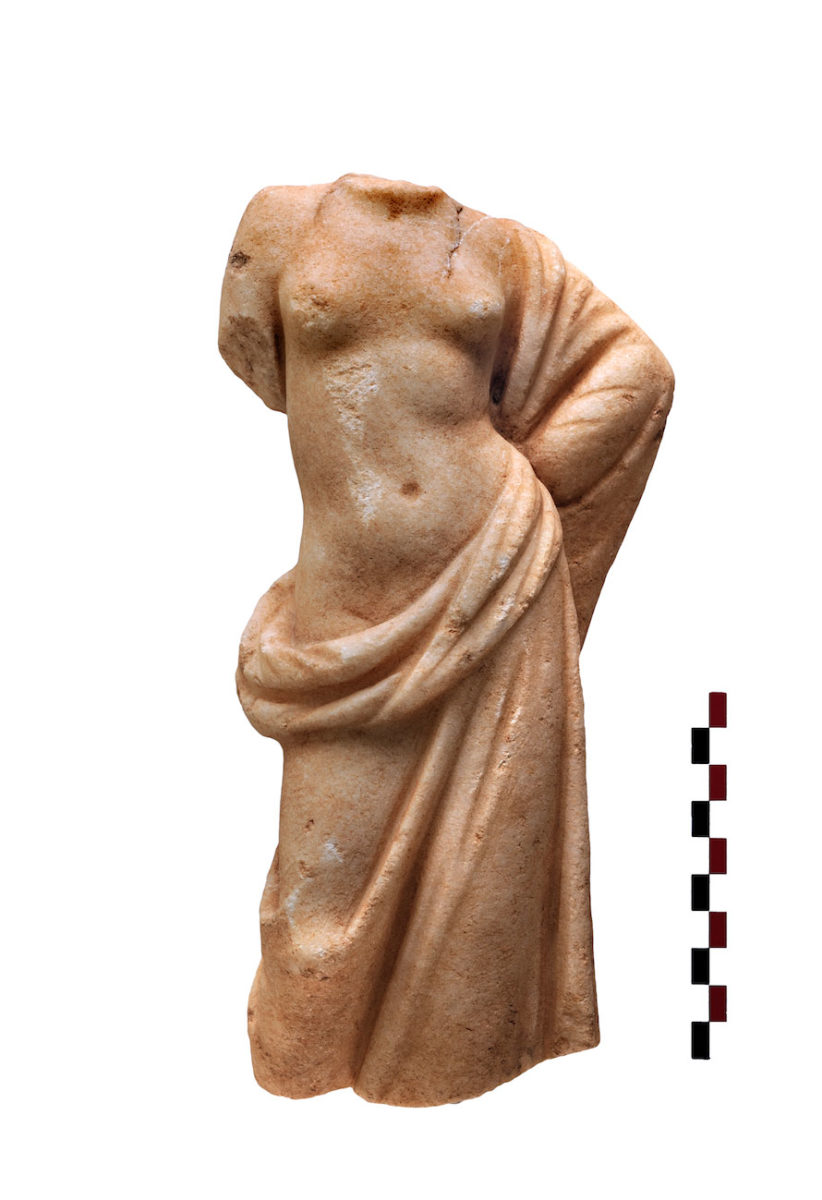 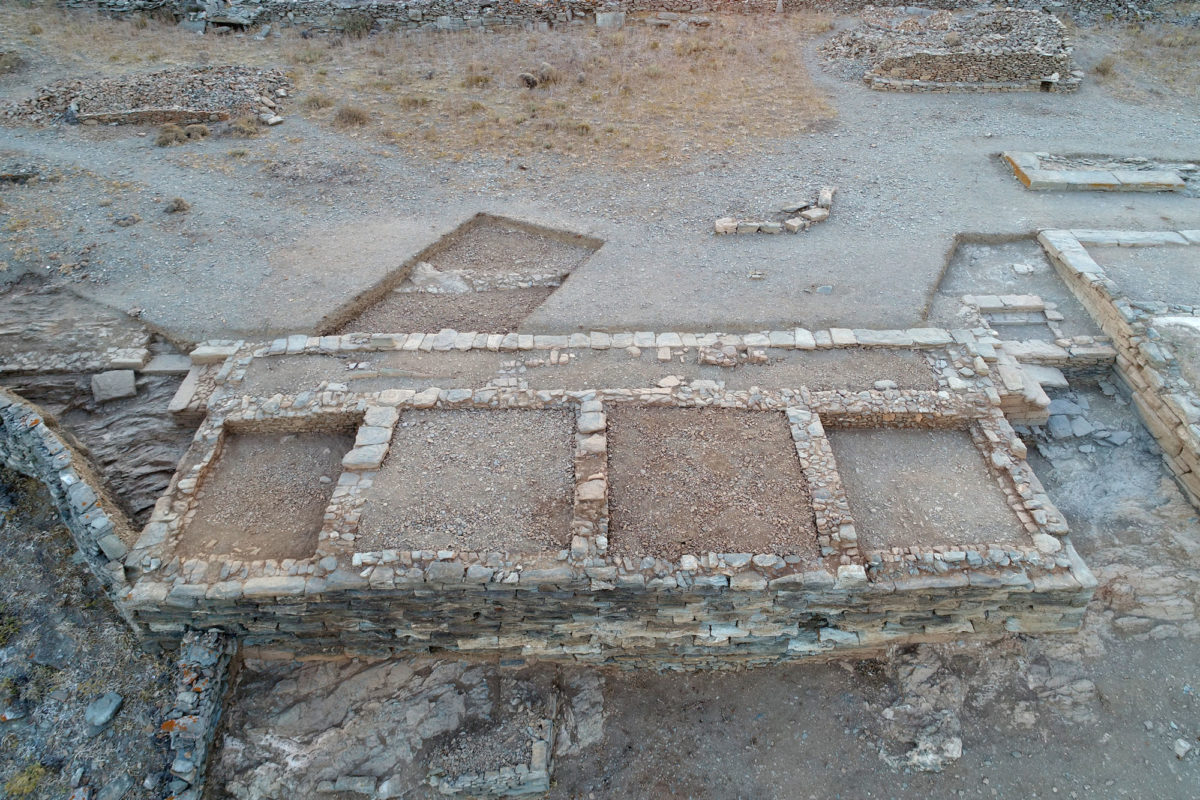 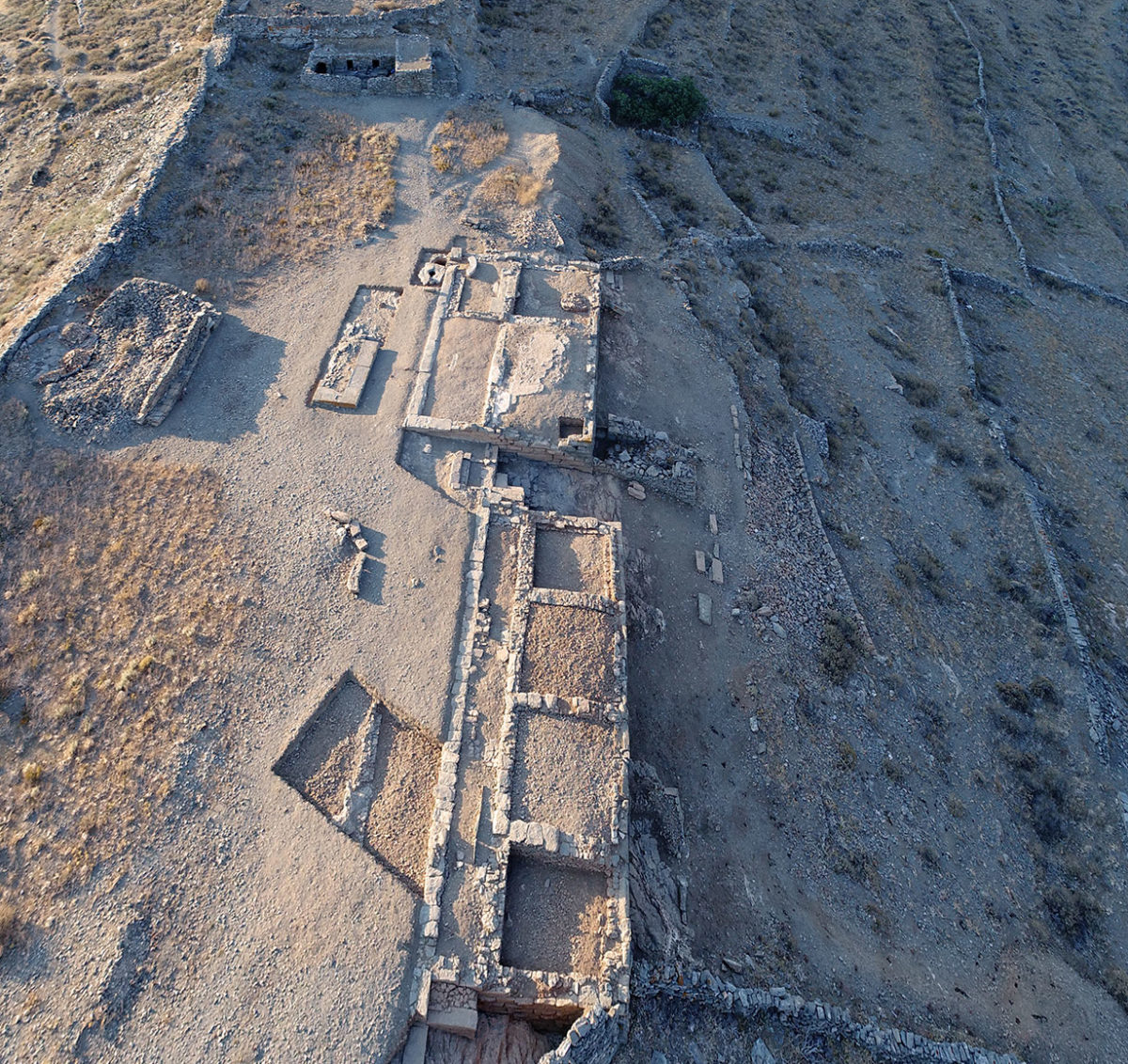 From this year's excavations

Τhe Archaeology Sector at the Department of History, Archaeology and Social Anthropology of the University of Thessaly announces the results of regular excavations at the ancient city of Kythnos (today’s Vryokastro) earlier this year (26/5-5/8). The excavations have yielded particularly significant findings.

The excavation of two Classical-Hellenistic monument buildings that had started in 2016 has been completed (fig. 1-2). The southern Building 1 (fig. 2 on the right, fig. 3), measuring 17.40×11.50 metres, which was also used in the Roman period, is divided into two rooms sharing a single portico (NW) with a Doric colonnade (this year, an entire column capital made of shelly stone was found at the bottom of the adjacent ancient cistern, probably from this gallery). At the northern part of Room A (fig. 3 on the left) a pebbled floor is preserved, as well as part of the elevated circular stripe for placing daybeds. As a small researching incision at the north-western corner of the site indicated the initial floor here was about 1 metre lower but we do not know yet whether it was also pebbled. Also, many fragments of a second floor found in the cistern, decorated with black pebbles forming geometric shapes, cannot be attributed to the later floor at which only white pebbles were used. There is of course a possibility that this unidentified decorated pebbled floor comes from Room C, bordering to the south. Indeed, the upper floor of Room C (fig. 3 on the right) has been corroded and is not preserved. Yet, at the rear part of it the solid rectangular sub-foundation of a pedestal has been uncovered, measuring 1.20×0.80 metres, probably aiming to host a cult statue. This pedestal is associated to the 2nd (Roman) phase of the site, when the prostyle single gallery of the building was no longer standing and at the southern half of the portico an informal hall was created with an entrance at the south. It seems that at that time a new threshold was placed to access Room C, about a metre higher than the initial floor of the area, off-centred to the central axis of the room but right across the pedestal of the cult statue.

At the south-eastern corner of Building 1 there is an attached pear-shaped cistern, cut into the existing rock. This year, with the contribution of volunteering speleologists from the SPELEO and HEIRON associations the inside of the cistern was thoroughly investigated; it is over 7.50 metres deep and 6.80 metres wide at the broadest part of its floor (fig. 4-5). It included large quantities of sizeable stones, mixed with a bit of soil, as well as numerous mobile findings, mainly stelae and sculptures made of marble. The findings inside the cistern comprise, among other things, ceramic figurines of female and child figures, multi nozzle oil lamps, a fragment of a kernos from Eleusis and the following marble sculptures from the late Classical-Hellenistic years: two heads of girls (fig. 6-7), two torsos of naked boys (fig. 8-9), the head of a bearded figure (Asclepius or Serapes) (fig. 10-11), a small Hekataion (fig. 12). These findings certify that the building is associated to the worshiping of Asclepius, as we had suggested last year, on the grounds of the finding inside the cistern of a Roman inscribed cippus with the name of the god. Parts of marble votive stelae were also found inside the cistern this year, some bearing inscriptions. One of them is about an offering to Aphrodite Derceto (Atargatis). The worshipping of Aphrodite at the particular site had been previously assumed, mainly due to the presence here of a marble statue, previously attributed by P. Themelis to Damophon, the sculptor from Messene. The theory was confirmed by the aforementioned inscription, as well as by a headless marble Hellenistic figurine of a semi-nude Aphrodite found this year at the destruction layer at the base of the western protecting wall of this building (fig. 13-14). Based therefore on this year’s findings, Building 1 should be associated with the worshipping of Asclepius as well as Aphrodite. Inscriptions testifying the worshipping of Gods from Samothrace have also been found in the area. Last but not least, inside the cistern, towards the deeper strata of the land filling that has been excavated, two human femoral bones have been found, their dating remaining unclear so far.

To the east of the facade of Building 1, the area of the altar has been investigated anew (preserved length 6.20 metres, width 2.85 metres). The altar seems to have been restricted within the limits of the northern half of the building, although we assume it also served the worshipping of other deities at the temple.

Building 2, to the north (fig. 2 on the left, fig. 15), measuring 20.20×8 metres, has four square rooms opening to a long narrowing corridor. The building must have had at least two entries from the east. At a second phase, however, the inside of the portico was also accessed from the north as well as the south through built-in tiers. Unfortunately the floors of use in the building have been totally corroded; however, investigation of the breccia landfill beneath them has yielded significant findings this year, ranging from the Geometric to the Hellenistic years, confirming that Building 2 was constructed in the Hellenistic times. Another important discovery is that the abutment starting at the north-eastern corner of the building ends at Abutment 4 and the sanctuary of Apollo and Artemis, dozens of metres to the north (fig. 16 in the background), confirming that it is a massive building project of monuments along the sea-front, with sacred and public spaces of the Ano Polis in this period. The exact use of Building 2, though, cannot be clarified until the mobile findings associated with its use have been conserved and studied (including ceramic figurines, lead weights, trade amphorae and many fragments of relief skyphoi).

Research at a 4-metre wide stripe between the two buildings uncovered the terraced slope to the plateau of the sanctuaries, which leads to a simple propylon (see figs 2, 3, 15). The area underwent an important intervention in the Roman years, when burning soil, with many animal bones and ceramics (mainly oil lamps from the Hellenistic-Roman years), probably from the area of the altar, were accumulated there and access was created with the tiers at the north-western corner of Building 2. Similar terraced accesses to the plateau were uncovered along the southern side of Building 1 (fig. 2, on the right) as well as the northern side of Building 1 (fig. 15, on the left).

Finally, within a few metres to the east of Building 2, during a trial research of two squares, a part of an older abutment wall was uncovered, built with unprocessed stones, running along Building 2 (fig. 2, 15), which is probably associated to the older phase of the site, in the Geometric-Classical years.

To conclude, consolidation and conservation of the excavated monuments of the ancient city has begun, starting from the temple of Apollo and Artemis (excavation 2002-2006), in close collaboration with the Ephorate of Antiquities of Cyclades.

With the research at the particular site of the Ano Polis on Kythnos island the two areas are now spatially connected to some of the most significant sanctuaries of the island (fig. 16-17). It should be reminded that a few metres to the north (fig. 16) in the period 2002-2006 a particularly important temple was excavated, which would operate from the 7th century BC to the 1st century BC – 1st century AD, with an unlooted sanctum containing numerous valuable votive offerings. It was probably a sanctuary for Apollo and Artemis. To the south of the Asklepieion and the Afroditieion stretches the Acropolis (fig. 17) with its sanctuaries waiting to be uncovered; the sanctuary of Demeter, identified through surface findings, seems to have held a preeminent place among the Acropolis sanctuaries. We hope that these zones are finally expropriated and become an archaeological site open to the public, in combination to the displays at the new archaeological museum of the island, which last year became part of the NSRF and is being constructed by the Ephorate of Antiquities of Cyclades.

The excavation on Kythnos was conducted by the Archaeology Sector of the University of Thessaly, under the direction of the professor of Classical Archaeology Alexandros Mazarakis Ainian, in collaboration with the Ephorate of Antiquities of Cyclades. Apart from the aforementioned institutions, research was financially supported by the Secretariat General for the Aegean and Island Policy of the Ministry of Maritime Affairs, Islands and Fisheries; the Southern Aegean Region; the Municipality of Kythnos; and mainly by the generous sponsor Mr Athanasios Martinos.

The director of the excavation