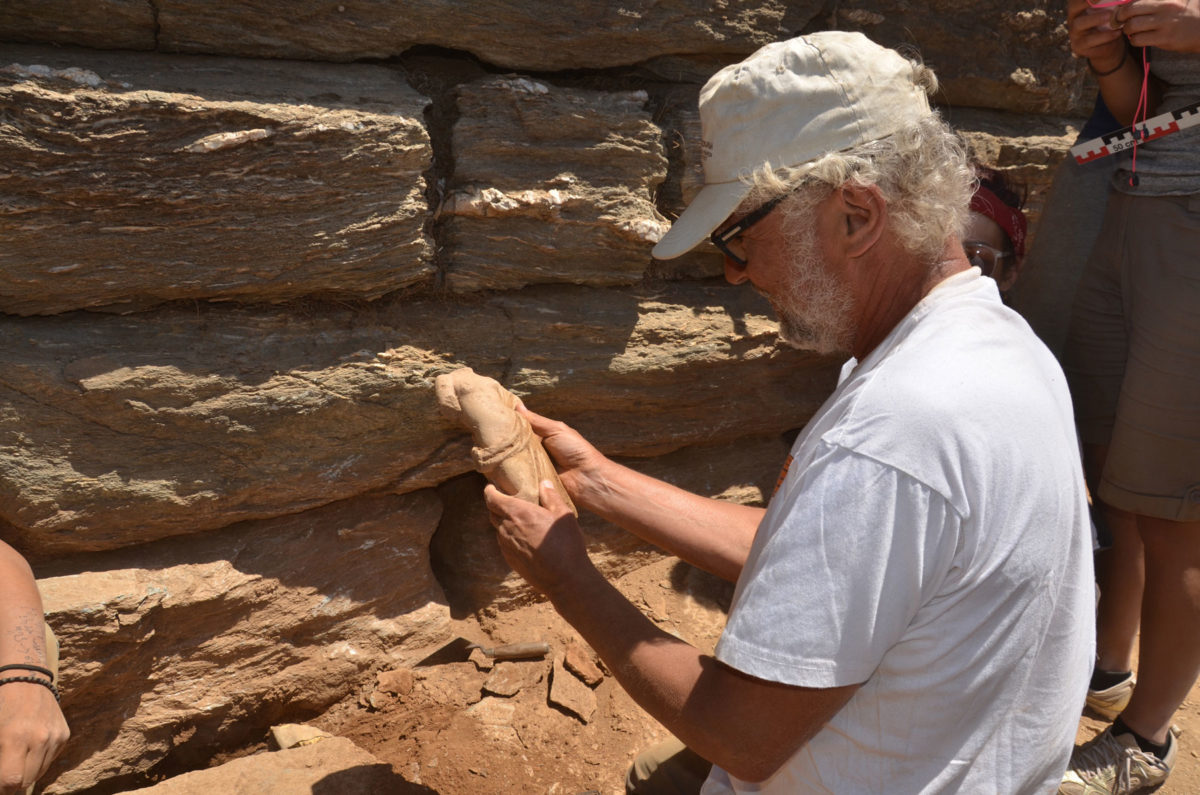 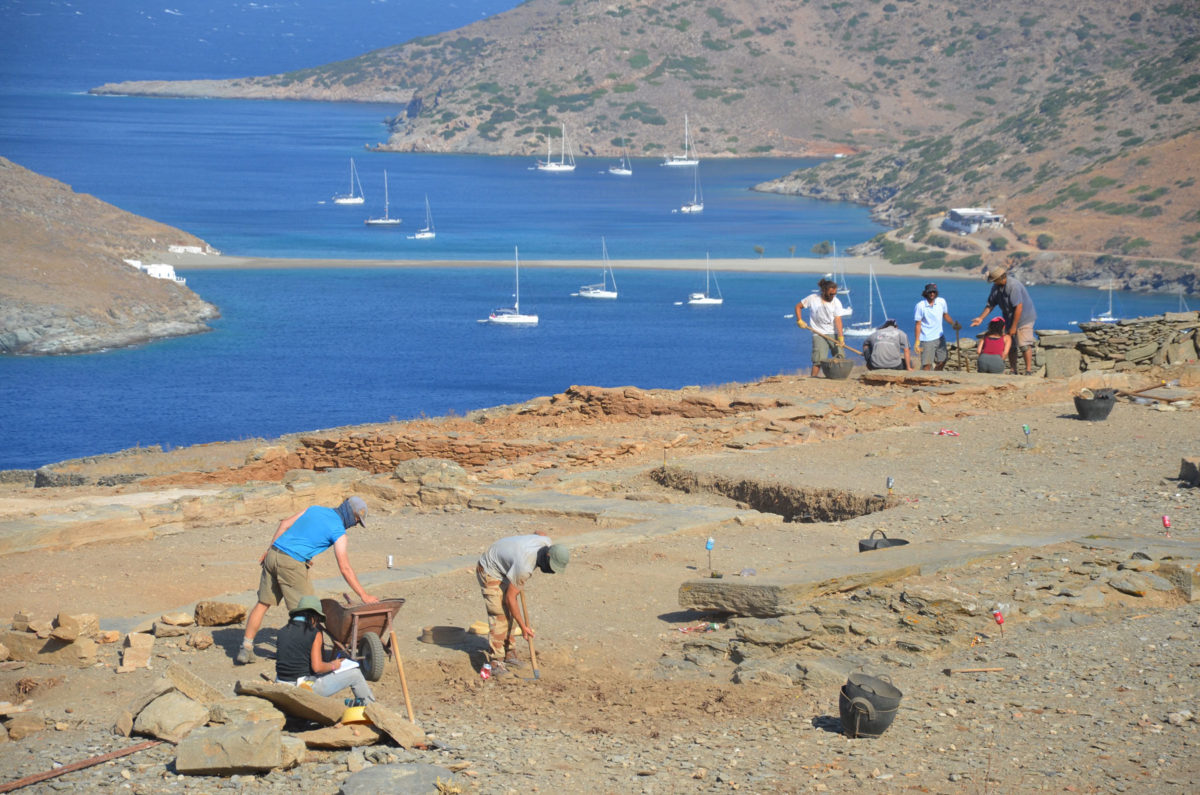 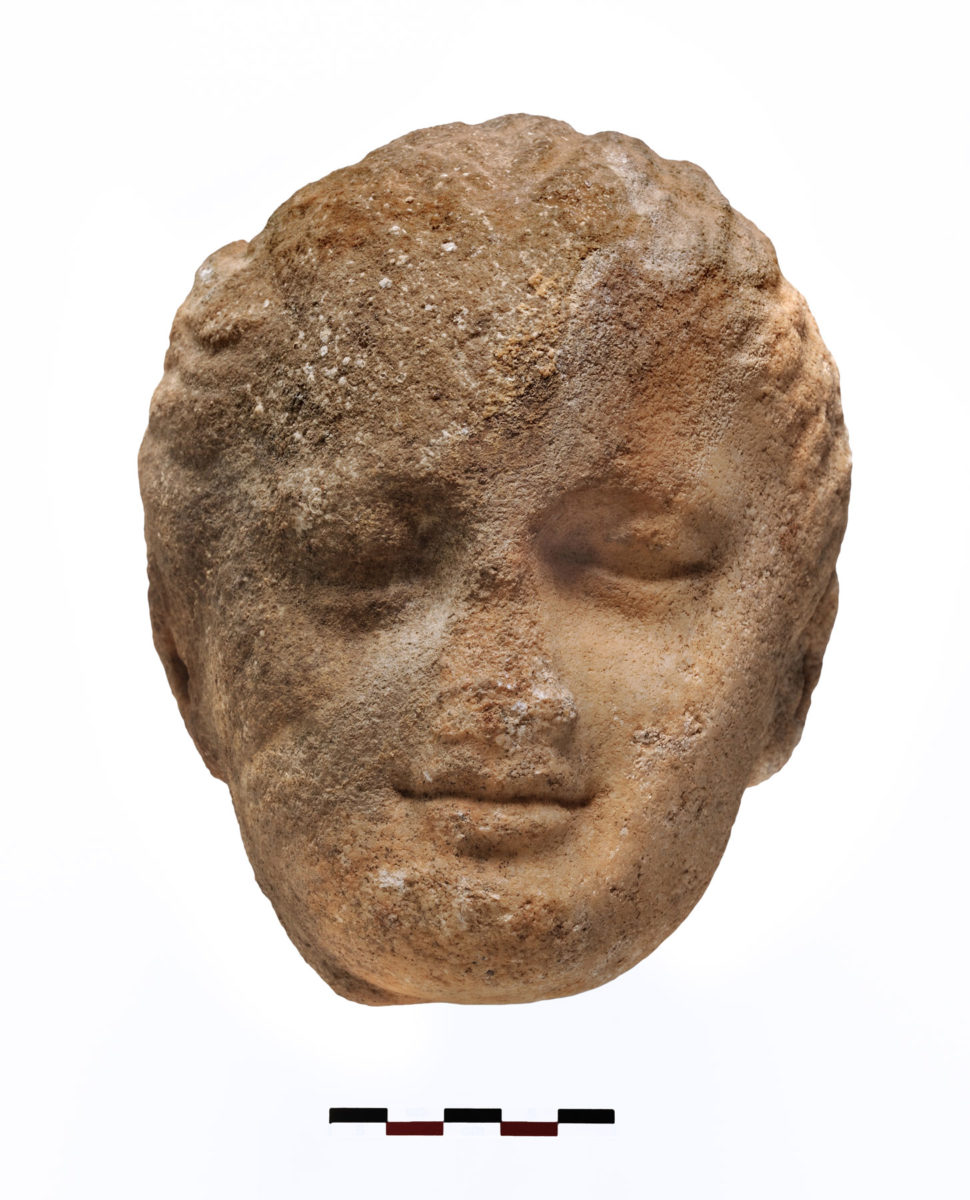 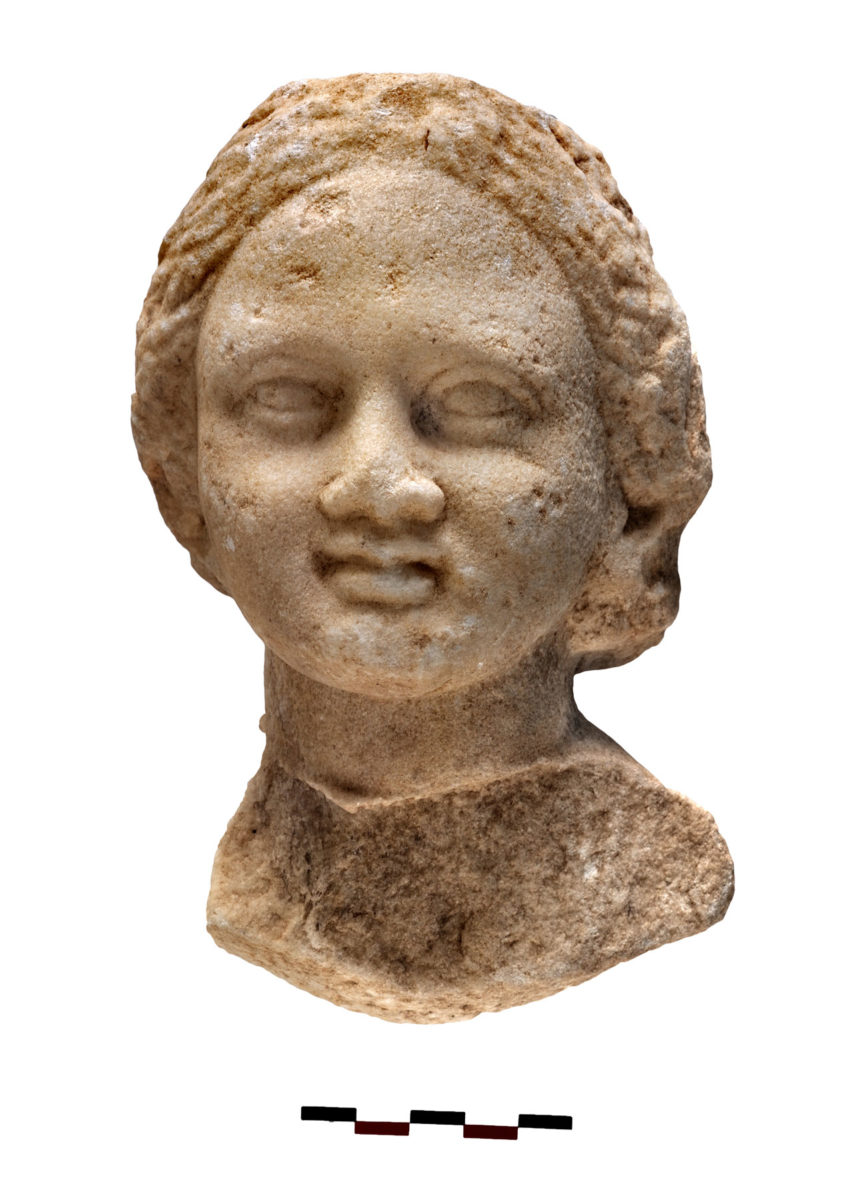 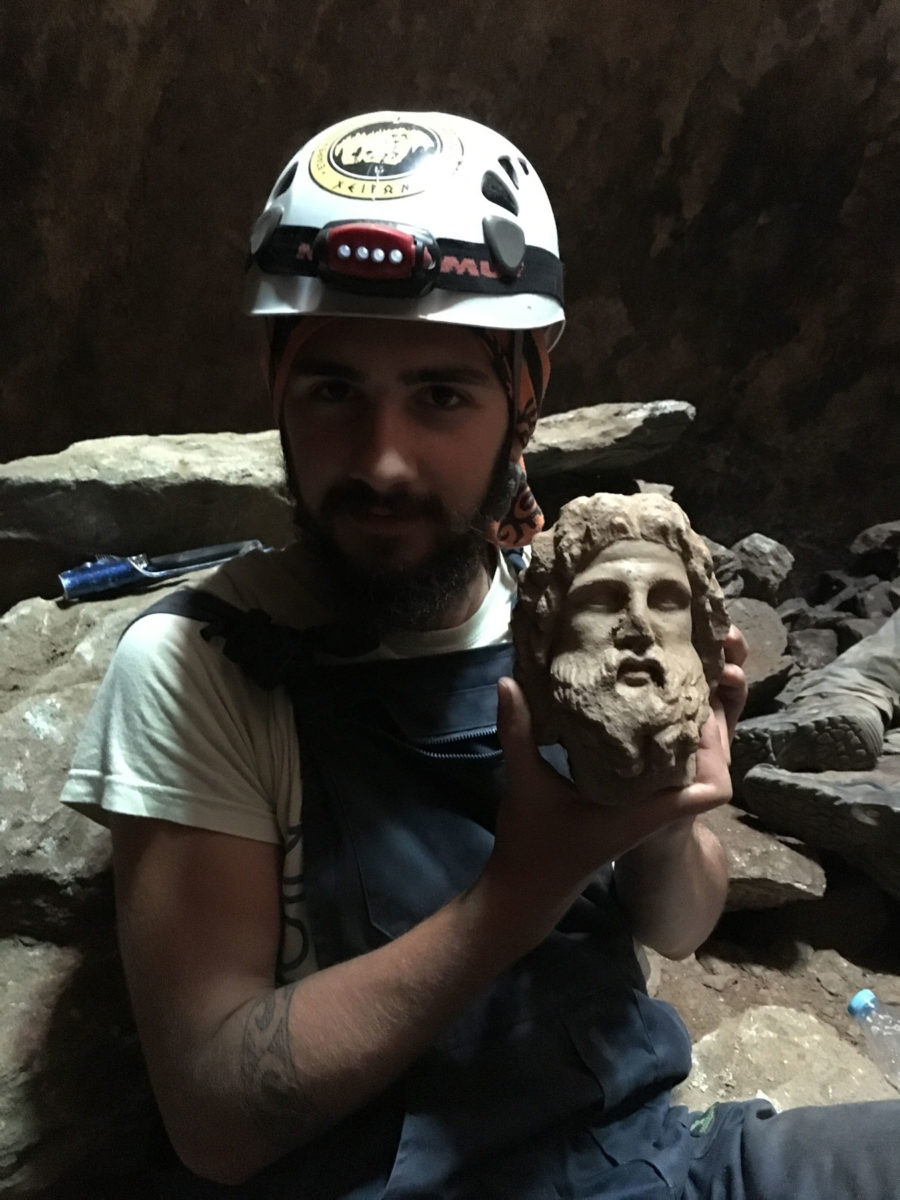 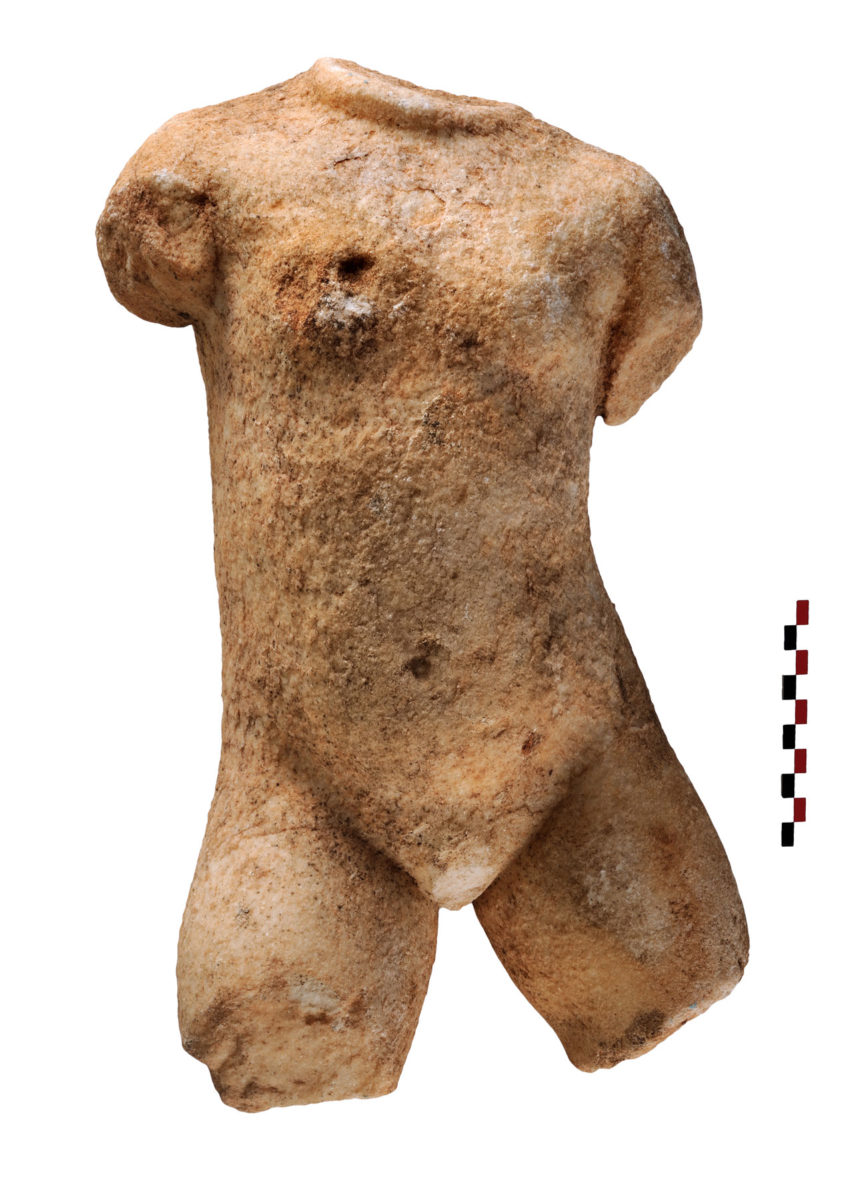 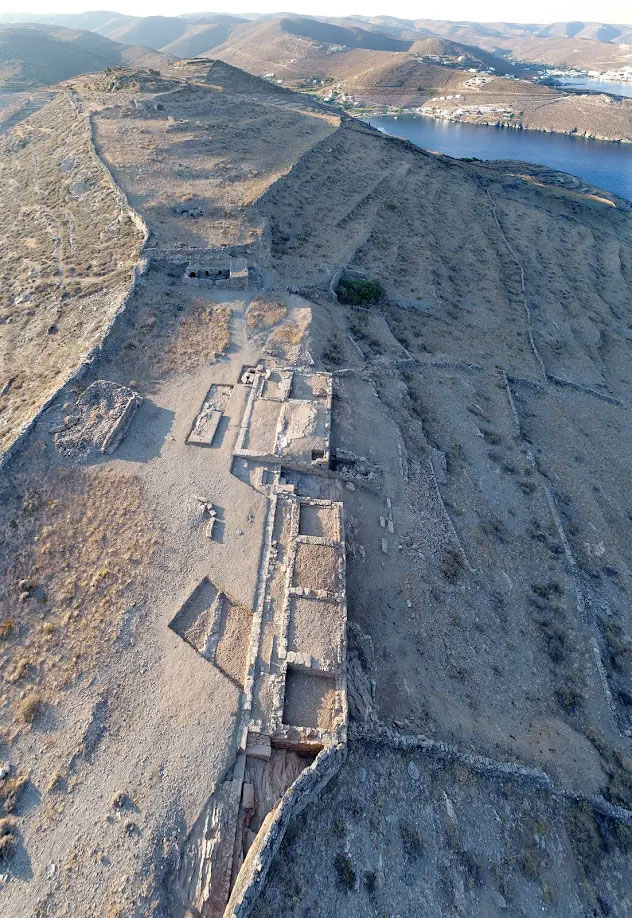 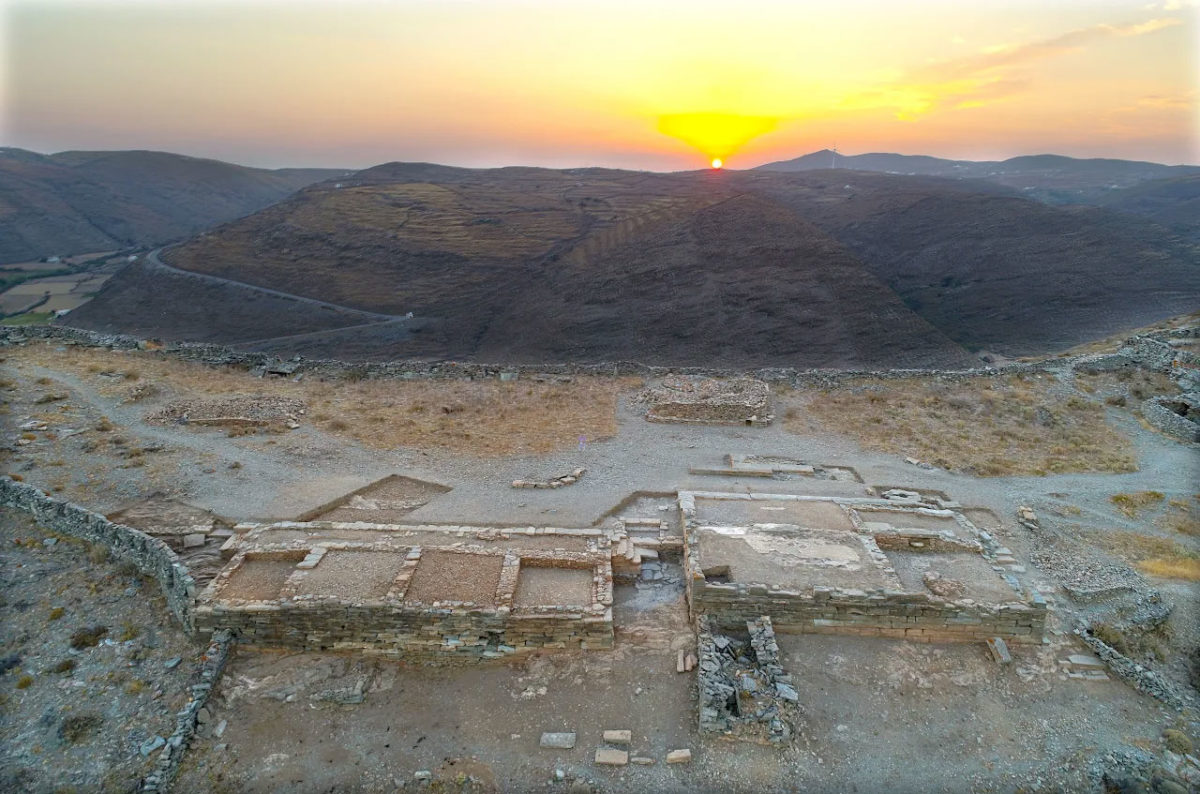 There have been impressive results in the excavations at the “Vryokastro” site on Kythnos, the location of the ancient city with the same name as the Cyclades island, inhabited from the 10th c. BC till the 6th-7th c. AD.

The following finds in the two buildings being recently investigated in the region—a very beautiful location on a hill with a view of the Aegean—have led the excavators to firmly believe that there were two sanctuaries of Asclepius and Aphrodite that may have been under the same roof: Ceramic figurines of women and children and many marble parts, such as heads of girls, torsos of boys, heads of a bearded Asclepius, an inscribed small column of the 2nd c. AD with a woman’s tribute to the god of healing (ΚΑΛΛΙΣΤΩ ΑΣΚΛΗΠΙΩ ΕΥΧΗΝ), a beautiful statuette of a semi nude Aphrodite and a Hellenistic inscribed votive stele to “(Αφρο)δίτηι Συρί(α)ι” (Aphrodite from Syria) are some of the finds that, combined with the architectural remains, reinforce the above.

“It appears to be a region with several cults, since earlier on an inscription had been found that read ‘Σαμοθρακίων Θεών’ [of the Gods of Samothrace], while there is an inscribed reference to Ammon Zeus. The most important cult however is that of Asclepius and Aphrodite” says Alexandros Mazarakis Ainian to the Athens and Macedonian News Agency. As professor of Classical Archaeology at the Department of History, Archaeology and Social Anthropology of the University of Thessaly, he is head of excavations being conducted in the area of the two ancient constructions referred to as Building 1 and Building 2.

Professor Mazarakis Ainian notes: “For the time being it is not that easy to state which deity is associated with which construction; it is certain however that Building 1 is connected with Asclepius. This is for many different reasons: A little marble head of a bearded Asclepius was found inside the building adjacent to a cistern; water always plays a significant role in the worship of Asclepius. Votives such as Kallisto’s were also recovered from inside the cistern where they had been thrown, perhaps when it had dried up some time during late antiquity. Lastly, there is a room which could be either for sleep or banquets; it is nevertheless a ritual space with a pebble stone floor and a place for couches. All this allows us to link Asclepius with this building which, however, may not have been limited only to his worship.”

What do we know about the two buildings being excavated regarding their dates and their use’s duration? The excavator points out that “the dating of Building 1 has not been clarified with complete certainty, because there must be a more careful study of the ceramics found in the backfills and the foundations. We can nevertheless date them from the Classical era, with a continuing use till Roman times, certainly till the 2nd c. AD. However, in the foundations we have ceramics of the 8th c. BC as well as Archaic, which means that it was already a place of worship in the Geometric era. This is a very significant fact, because already from that century they had demarcated the sacred places of the city which had started to be organized in terms of urban planning.”

Building 2 was constructed in Hellenistic times, its function however remains to be verified. Professor Mazarakis Ainian informs the Athens and Macedonian News Agency that ‟the floor of the specific building had not been preserved, so we have no finds from the time of its use. Consequently we cannot easily talk about its function. We also do not have a clear picture of its architectural form. It certainly had four square rooms that opened onto a long narrow corridor, so they also could have been connected with the Asclepieion; they could, for example, have been dormitories”.

The two buildings are in the Upper Town, on a partly artificial plateau, about 120 m above sea level, created in Hellenistic times. “The Upper Town has become a monument for the sake of its sanctuaries, with open spaces in between. We believe that one of the latter could have functioned as an agora in the Hellenistic era, while further down the slope, a late Classical-Hellenistic building has been found, which we have identified as possibly the city’s Prytaneion/Town Hall,” explains Professor Mazarakis Ainian who, with his team, made an exciting discovery in 2002 on the same plateau, a little to the north of the Asclepieion and the Aphrodision. They found the twin temple of Apollo and Artemis with an unplundered innermost sanctuary full of valuable votives, among which were 100 and about 150 pieces of gold and silver jewellery respectively. “Possibly the largest assemblage of gold and silver found in a sanctuary of the Aegean,” he says to the AMNA, adding that these particular finds along with the rest of the finds in the temple’s sanctuary will form the core of the new archaeological museum in the Chora of Kythnos. “It will be a Museum of Jewellery” he says, while talking about this NSRF project that is in its second year of construction and being realized by the Cyclades Ephorate of Antiquities.

Professor Mazarakis Ainian also informs the AMNA that although the area of the ancient city was about 69 acres, excavations have been restricted to a small expropriated area in the Upper Town.

“All the rest of the area has not been expropriated and so we cannot investigate it,” he points out, adding that “for the excavation of the two buildings that are on private land, a special permit was issued by the Ministry of Culture and Sports following an assessment by the Central Archaeological Council, after decades of effort. Should the owner not be willing, the MCS does not go ahead with expropriations except in very exceptional cases. Till recently, the Ministry had not considered this case to be exceptional and had not proceeded with the expropriation. Perhaps now something may happen.” He then describes how he envisages the future of the project:

“The two monuments, that are visible and preserved at a height of 3 m, can be joined with the expropriated zone where the well preserved sanctuary of Apollo and Artemis are located, and form a beautiful archaeological site. At the same time there are also sunken antiquities in the harbour which we investigated between 2005 and 2011 in collaboration with the Ephorate of Underwater Antiquities. These likewise could become an underwater archaeological park open to the public. All the above could be integrated into an interesting archaeological site, complete with information plaques. This is urgently required at the present time, because the Museum in the Chora is being constructed to house the finds mainly from the ancient city of Vryocastro, which should be seen in one combined visit.”

What about future excavations? “Next summer we shall complete researching the cistern, and over the next years, i.e. 2018-2020, we shall be moving to the small island of Vryokastraki, down by the harbour. In Classical times, this island was connected with the coast, the sea level having risen since then by about 2.5-3m, so it formed a closed harbour. This islet is very interesting because it seems that it was there that the first inhabitants settled and we hope to find earlier evidence of the ancient city’s habitation. It also appears that the city gradually shrank in late Roman times, just before being abandoned. We have, in other words, the two extremes; the birth of the city on the one hand and its decline and abandonment on the other. So we are preparing for this three year research,” Professor Mazarakis Ainian concludes.

The excavation on Kythnos is conducted by the Archaeology Department of the University of Thessaly in collaboration with the Cyclades Ephorate of Antiquities. Apart from these agents, research is being supported financially by the Secretariat General for the Aegean and Island Policy, the Region of the South Aegean, the Municipality of Kythnos and primarily, the sponsor Athanasios Martinos.