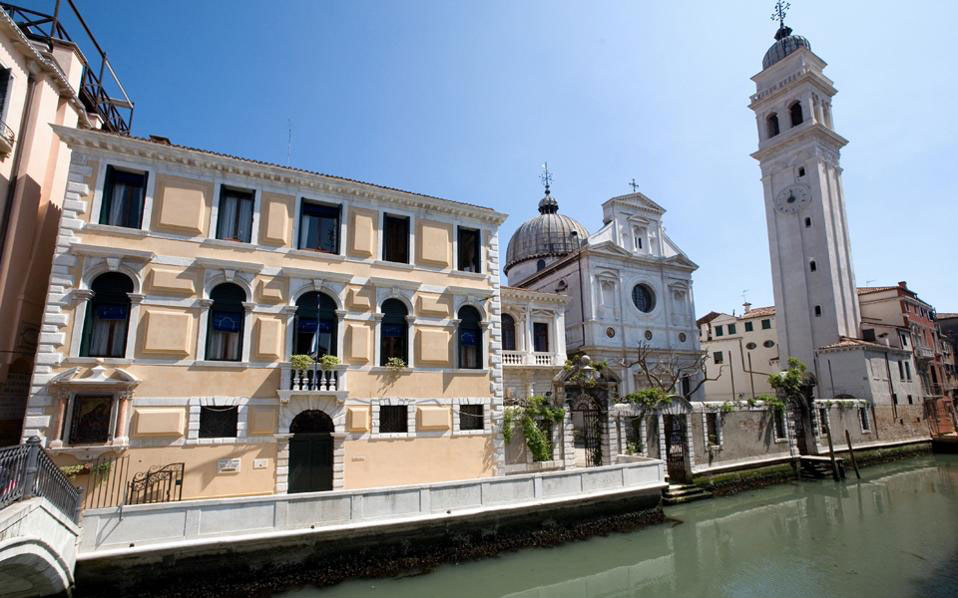 Chr. Arabatzis: “The Hellenic Institute in Venice is being reborn”

The scientific and research relaunching of the Institute of Byzantine and Post-Byzantine Studies in Venice is being endorsed by the Supervisory Committee which took office at the beginning of June this year. The Committee chairman, professor of the School of Theology of the Aristotle University, Thessaloniki, Christos Arabatzis talks to the AMNA about the Institute’s past, present and future. He stresses that the Venice Institute should be promoted as the most significant intellectual and scientific centre outside Greece and the linchpin of cultural diplomacy.

The Institute is the owner of considerable property – real estate and moveable assets –which came from donations of the Greek Community in Venice. It has almost sixty properties in its possession, among them are architectural monuments of a particular cultural significance, such as the church of Saint George and the Flanginian School. It owns hundreds of icons (three from the Palaeologian era), 250 artefacts and vessels of worship, the archive of the Greek Brotherhood of Venice as well as a collection of manuscripts. Among them is the “Fable of Alexander the Great” a Byzantine manuscript with miniatures, a Collection of Byzantine Music Manuscripts and Patriarchal 16th century documents.

A complete text follows of the interview of Mr. Arabatzis with the AMNA and Thanasis Tsinganas:

Q.: What state is the Venice Institute in and what is your top priority?

A.: Based on whatever is provided for by the new law 4505/2017, we are trying at the moment to restart the Institute that till then still operated according to its founding law of 1951 and the Organization of the Royal Decree 720/1966. As a result many things that had been anticipated then, no longer apply, while some regulations that applied in the 1960s are no longer functional.

Consequently, the newly created, pro bono Supervisory Committee that is an organic part of the Ministry of Foreign Affairs, made up of 3 university professors and 2 diplomats, set itself the objective of defending the Institute’s operation. We have already invited applications for the position of Chairperson and at the moment candidates are being assessed. As a next step and based on the assessment being made by the independent unpaid Committee of University Professors, the EU will propose the Chair with both the Ministries of Foreign Affairs and Education and then will supervise the Institute’s operation on the basis of the new legal framework.

You asked us about the situation we found when we stepped in. Regrettably I have to say that it was a situation that is unacceptable in any law abiding state. The Hellenic Institute of Byzantine and Post Byzantine Research is a Public Legal Entity belonging to the Ministry of Foreign Affairs for 65 years. However, since being established it had not been under any auditing body of the Greek State, resulting in the lack of some type of auditing from independent authorities, despite the laws of the Greek State also being in force for this Foundation, namely the control over its Administration and Finances. As a result we find out today that precious relics that were in the libraries and on the premises of the Institute are nowhere to be found and that no one knows what became of them. And this is not our own discovery. Some had already been known from the 1980s while others were discovered in 2010 in the inventory of property occasionally made by inspectors from the Ministry of Foreign Affairs. Moreover, while searching to find the delivery and acceptance protocols of each director nothing was recovered from the last 40 years. This led us to the decision to attempt the complete inventory and documentation of the relics, vestments and icons outside the Museum with the help and assistance of archaeologists from the Museum of Byzantine Culture of Thessaloniki and the Byzantine and Christian Museum of Athens.

The Institute’s library can also host hundreds of researchers every year but it still has not been catalogued electronically, despite funds being allocated by the NSRF in the decade following the year 2000 and the generous donations of foundations and private individuals to the Institute.

In general I would say that the duty of the Supervisory Committee is to defend the institute’s operation and its scientific promotion, to shield it through the control by independent authorities which, despite having the Constitutional right to preventative and restraining orders on Public Legal Entities, were not invited to enforce it in the Institute’s case. The fact that the latter is on foreign soil is no excuse. It is a Public Legal Entity and whatever is provided for by Greek Legislation applies to it also.

At another level, the objective of the Supervisory Committee is to help with all its strength and knowhow in the setting of a course by its new chairman for research and development of Byzantine and Post-Byzantine Studies in the heart of Europe and the realization of the Institute’s goals.

It should not slip our mind that since it was established, the Institute has the duty to promote and highlight in every possible way the various aspects of Hellenism, as these flourished and were expressed in monuments of literature and art in the Byzantine and Post-Byzantine era. We would like to believe that this scientific presence in the heart of Europe is a powerful tool for exercising our much needed cultural diplomacy, both as a state and as a nation. What the modern world admires us for is our culture and its various expressions over time.

Q: Do you believe that the value and mission of the Institute in Venice is understood by Greek society?

A: The Institute’s mission is extremely serious.  It is notifying, researching and scientifically approaching all aspects of Greek culture, which in various forms of literature and art developed in Byzantine and Post-Byzantine times. In accordance with the Greek-Italian agreement of 1951, the Institute is financially independent and thanks to its economic strength it can develop research, studies and structures of cultural diplomacy needed both by the Greek scientific community and the Greek state. Its sound financial state will quickly provide the proper momentum for the Institute. After the Chair has been elected and his/her new organization has been drawn up , scholarships will be announced till the end of the year and an effort will be made for the Institute to be included in large scale European and American research programmes for the realization of all its objectives.

A: The Institute’s relations with Venice’s Greek Orthodox Community, a continuity of the 15th-century Greek Brotherhood, are intimate and in a spirit of mutual appreciation and understanding. Whatever clouds were originally created could not cause rifts and controversies. At our last meeting with members of the Greek Community of Venice we agreed that the Institute is entering a new phase and a new era. The framework for our coexistence and engagement is made up of mutual honesty, the support of legitimacy and good administration that must govern the Institute’s operation and the fulfillment of its obligations towards the historic Greek Community, which endowed it with its real estate and moveable assets. Besides, I consider the Institute’s scientific objectives as a priority for all of us; namely, the preservation, protection and disclosure of its enormous cultural heritage.