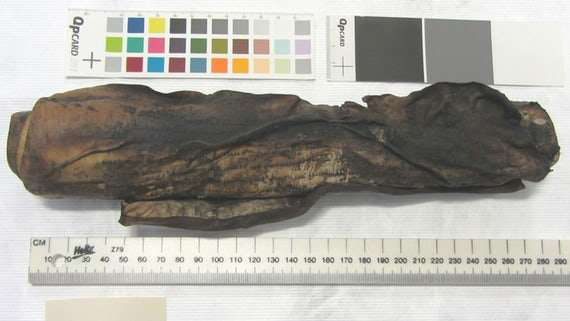 Scientists are on the look-out for damaged and unreadable ancient scrolls as brand new techniques have revealed the hidden text inside a severely burnt 16th century sample.

The new development, the latest in a long line of advancements in the field in recent years, has shown how ‘virtual unravelling’ can be achieved using a more autonomous approach and with scrolls that contain multiple pages.

This has been demonstrated by virtually unravelling a 16th century scroll from Diss Heywood Manor in Norwich, which was left severely charred, damaged and fused together with no possible way of physically opening the scroll without destroying it.

The scroll, which was 270mm wide, would have contained information on life in the manor and included details on land transactions, disturbances of the peace, payment of fines, names of jurors and information on the upkeep of land.

Researchers at Cardiff University have been refining their technique since they first revealed the hidden text of a scroll from Bressingham Manor over five years ago.

Their technique, which involves collaborators from the UK and across the world, firstly involves using x-ray tomography, usually reserved for use in the medical field, to create thousands of thin cross sections of the scroll. In each cross-section, ink from the scroll is made visible as bright blobs.

Using highly advanced computer algorithms, the team are then able to piece together each of the cross sections and their associated ink marks to form a flat representation of the scroll.

The text obtained from the Diss Heywood scroll confirmed that it does indeed relate to Heywood Hall and that it is a record of the Curia Generalis, the General Court, which usually refers to the Court Leet where peace keeping functions were exercised.

The results also confirmed that the scroll deals with land transactions and possibly testamentary business. It was also possible to pick out names of individuals.

Principal investigator on the project Professor Paul Rosin, from Cardiff University’s School of Computer Science and Informatics, said: “The scroll from Diss Heyword was an extremely challenging sample to work with, not least because it contained four sheets of parchment and many touching layers, which can result in text being assigned to the wrong sheets.

“In addition to this, the scroll was heavily discoloured and creased and was covered in soot-like deposits over the entire exterior. Nevertheless, we’ve shown that even with the most challenging of samples, we can successfully draw information from it.

“We know that there is a large body of historical documents in museums and archives that are too fragile to be opened or unrolled, so we would certainly welcome the opportunity to try out our new techniques.

“Similarly, the method we’ve developed is heavily automated, opening up the possibility of exploring a larger range of documents and even other types of media, such as old and damaged camera films.”