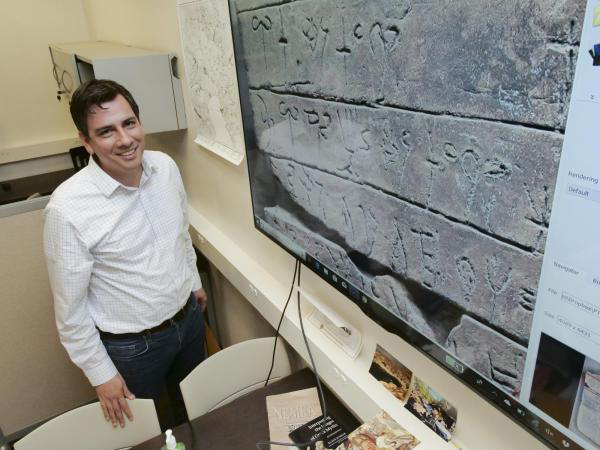 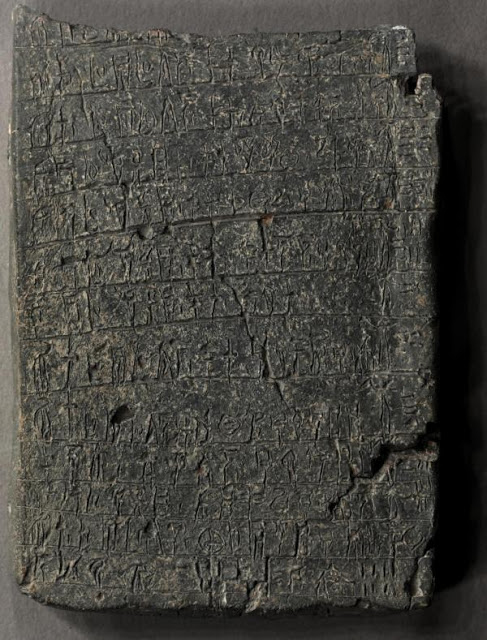 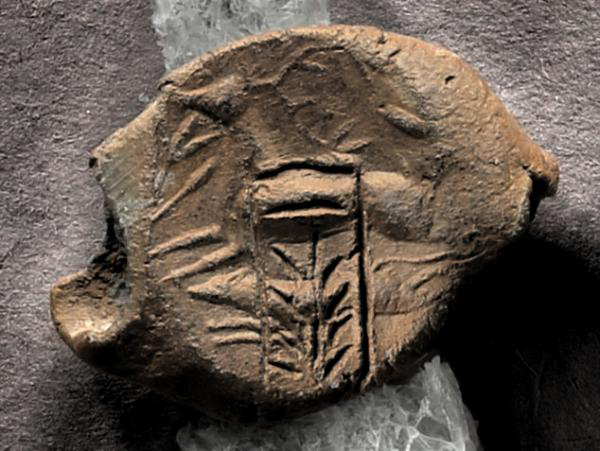 Nakassis studies texts of early Greek communities, focusing on the Mycenaean societies of Late Bronze Age Greece. He co-directs an innovative project involving the digital preservation of administrative documents from the Palace of Nestor at Pylos, Greece. Inscribed on soft clay tablets, these records were written in the earliest known form of the Greek language using a syllabic script called Linear B that dates to the Late Bronze Age (1400–1200 BC).

“The reason I’m drawn to the Bronze Age is it’s a period that’s interesting, complex and sophisticated, but we don’t know that much about it,” Nakassis said. “What’s exciting for me about working in the Bronze Age is there is so much that’s out there left to be learned.”
Linear B tablets were first discovered in Greek archaeological excavations in about 1900, but archaeologists and historians couldn’t read the texts, which were unlike the later Greek alphabet that was the precursor of our modern alphabet. The script used on the Pylos tablets is a syllabary. Instead of one sign representing a single sound, as with our alphabet, a syllabary sign represents a syllable.

In 1939, a large cache of Linear B tablets was discovered during an excavation of a large palace at Pylos. The word “palace” used in this context is what archaeologists refer to as an administrative center. The remarkable find was possible because the palace where the tablets were stored burned down, and the fire baked the tablets into hard clay, preserving them for future archaeologists. The tablets found there have been dated to 1200 BC.

“As far as we know, none of these texts was intentionally baked, and none of them was designed to be used for more than a year,” Nakassis said. “Tablets were composed on an annual basis, like taxation records. Taxes were paid. Scribes recorded.”

Nakassis works in a time period that witnessed the rise and fall of the Mycenaean civilization, featuringambitious engineering projects such as bridges, an artificial harbour and the drainage of Lake Kopais in Greece to use as farmland. The Mycenaeans were also talented at painting frescoes; making jewelry out of gold and Baltic amber; and constructing large, elaborate burial sites.

The significance of the find at Pylos and its potential for casting light on Mycenaean civilization inspired Nakassis to use an innovative approach to representing the Linear B text using advanced imaging technologies.

The Linear B project uses 3D scanning and reflectance transformation imaging (RTI)—a kind of computational photography—to produce high-quality images of the tablets. With a tripod-mounted digital camera pointing down, Nakassis takes 54 photos of each inscribed surface of the clay tablets changing only the light source so that the object is illuminated from a variety of angles. The result is a polynomial texture mapping file that records the color and lighting conditions of each pixel. Changing the direction of the light over the inscribed signs allows him to see details in a way not possible before.

With RTI, the shallow incised marks can be more clearly distinguished as intentional signs or as breaks running through the signs.

The Linear B texts are administrative: lists of goods, delivery statements and records of marketable transactions. The tablets provide details on the manufacture and distribution of commodities such as wool, linen, animals, metals and harvested food, including barley, figs and olives.

“The tablets tell us how the palaces operated,” he said, “and what administrators were keeping track of using writing. There were probably only a handful of people who could read and write, so the tablets give us a specific understanding about the day-to-day operations of the palace.”

When Nakassis started working on the Linear B tablets for his PhD dissertation at the University of Texas at Austin, he wanted to understand how the different officers of the state interacted with each other. He has learned that the systems were more flexible and responsive to society than the traditional model, which held that palaces were oppressive despotisms.

His interest in documenting and understanding the tablets started in college. As a child, he spent summers with his family in Greece, where they visited archaeological sites. In college, he took courses in ancient Greek and classical archaeology. And then he was hooked.

Nakassis and Kevin Pluta of the University of Texas at Austin co-direct the Pylos Tablets Digital Project. They have been working on the texts since 2012 and have visited the Pylos palace excavation many times. The goals of the project are to digitally document all of the tablets and to produce a print edition of the administrative texts from the Palace of Nestor.
In addition to enhancing readability of the tablets, RTI also helps with the conservation and archiving of the Linear B tablets. Availability of high-resolution digital images will allow scholars around the world to better interpret the texts and also reduces the need to handle the fragile tablets, helping to preserve them for future generations to study.
Nakassis was awarded the 2015 MacArthur “genius” fellowship for his work at the palace at Pylos. His book, Individuals and Society in Mycenaean Pylos, used the methods he developed for researching the 964 individuals named in the Pylos texts and challenges a long-held assumption that an elite few controlled Mycenaean society. He argued that Mycenaean society was less hierarchical than previously thought, and that power and resources were more broadly shared among the community, providing an alternative view of the Mycenaean world as a more open society.

“I got interested in the people who appear in the tablets, because most scholars hadn’t paid much attention to those people,” Nakassis said. “The tablets track activities and what was going in and out of the palace. I wanted to know who these people were. What were they doing?”

He is also working on a publication of new text that’s written in a different script found on Crete in the Bronze Age. This text is Linear A on ivory and Nakassis has used the RTI technology on it, as well.