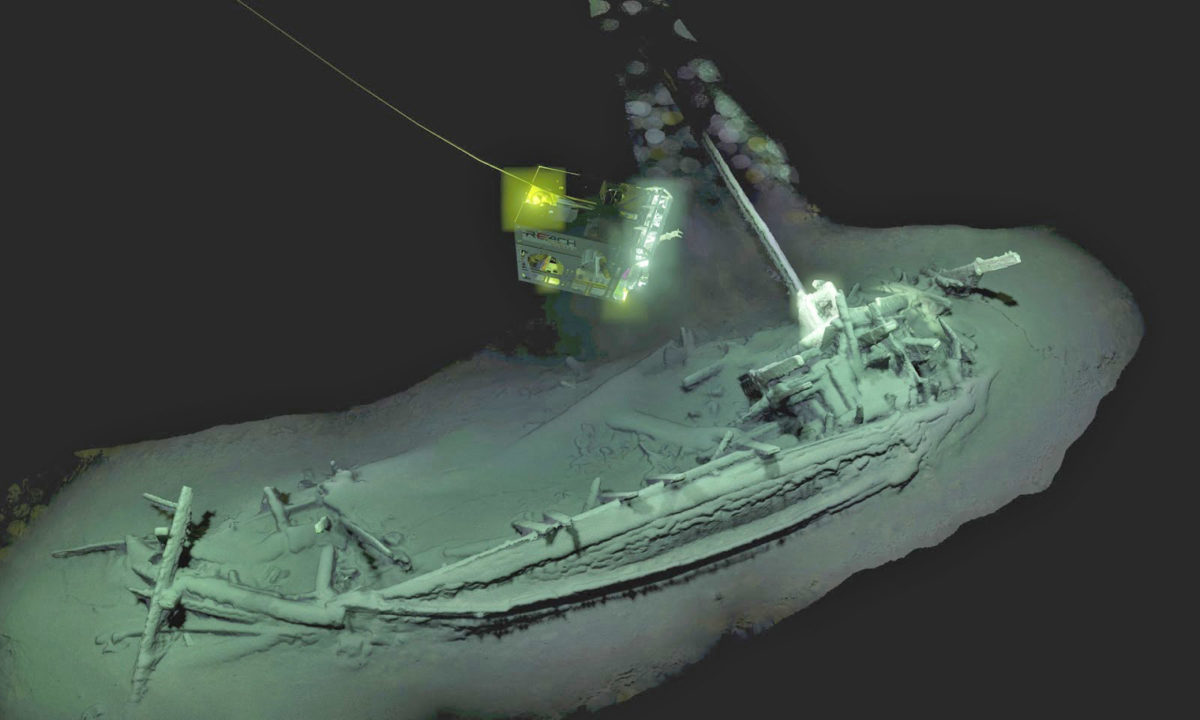 G. Koutsouflakis: “It comes as no surprise that the ship is Greek”

Announcement on the “intact” ancient shipwreck

The most ancient “intact” shipwreck ever discovered is that of a Greek ship over 2,400 years old. So say the archaeologists who located it at the bottom of the Black Sea. It is 23 metres long, found with its mast and rudder as well as the benches for the oarsmen in place. It was discovered by the research team of the Black Sea Maritime Archaeology Project (MAP) at a depth of more than 1,600 metres, in a region where dozens of wrecks have been discovered of the Roman and Byzantine era as well as of a 17th century ship.

“For the ship to be found intact in the Black Sea means it was located on its anoxic layer where there is only a minute quantity of oxygen. On this layer no microorganisms develop that consume decomposable materials, so wood can survive in an extremely good condition”, says Dr George Koutsouflakis, one of the most experienced Greek underwater archaeologists, to the AMNA about the ancient “intact” shipwreck.

“As for the ship being Greek, it comes as no surprise. The Black Sea was full of Greek colonies. At the time of the shipwreck (in 400 BC according to the dating of one of its pieces) and throughout the whole of antiquity, there was intense activity in the Black Sea,” adds the Greek archaeologist who in recent years is director general of research of the Ephorate of Underwater Antiquities in the Fournoi archipelago, where to date 58 shipwrecks have been located dating from the Hellenistic period to Modern times.

Is it however, just the destruction of the wooden hull of ancient ships that does not allow their wrecks to be preserved? “There are various other factors” answers Mr. Koutsoflakis to the AMNA’s question, pointing out that “In a shipwreck, especially when in a coastal zone, there are forces at play that essentially dissolve a shipwreck’s structural cohesion. Moreover, if they are at a depth that is accessible to divers they are also under threat, as is the case all over the Mediterranean. What usually happens is that the deeper a shipwreck is located the better it can be preserved, conditions in the deep being more stable and the human factor less likely to intervene”, he says to the AMNA.

What information could an “intact” shipwreck give us? “Information given by every shipwreck. Its location supplies basic information about its identity. If it is at a depth where its recovery and systematic excavation can be carried out, then it can give a lot of information as to its cargo, the era it was built, life on board, trade strategies et al.”, says Mr Koutsouflakis.

According to the researchers of the ancient shipwreck in the Black Sea, the ship will not be recovered. The archaeologist explains to the AMNA that the depth is prohibitive for such a move, not because it is impossible but because of its excessive cost.

The underwater research at Fournoi

Regarding the research at Fournoi, Mr. Koutsouflakis mentions that “so far, in four excavation periods we have found a total of 58 shipwrecks. It is a place in the Eastern Aegean that is being thoroughly explored recently and this is the reason that such a large number of shipwrecks has turned up”. Moreover, he adds, the region “was a hub for ancient shipping and with a large number of ships passing through, even if a small percentage sank every year, one ends up after 2.00 years with many shipwrecks”.

As to the possibility of finding shipwrecks elsewhere, the archaeologist tells the AMNA that “they could also be found in other spots of the Eastern Aegean but we simply have not searched thoroughly. Therefore we do not have comparative data at the moment. There are regions in the Eastern Aegean with many shipwrecks, both in our islands and opposite on the coast of Asia Minor”. But Fournoi in particular have a key position on the map of the Eastern Aegean. “Passing them was almost obligatory. Especially when one is moving on a north-south axis along the Asia Minor coast,” he points out.

“In Fournoi, till now, we have been locating and recording shipwrecks. When this phase ends, we shall count our shipwrecks and then decide which of them are worth excavating in future”. He says, referring to research in the area that has only just begun. “This is only the first phase of the surface survey. I may possibly be ending my career there”, he says to the AMNA, pointing out that now a five year plan must be submitted.

“Let us see where our research will be heading, what our priorities will be for the next five years. I am not entirely sure if we shall be working in 2019. We have already recovered very many things, the conservation of the finds has been delayed and we also have to study whatever material we bring up in order to publish it. Therefore our priority for 2019 is the study and publication of the material and not the excavations that will bring us more,” he concludes.