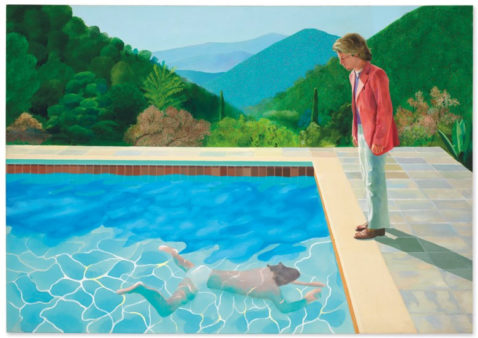 A record sum for a living artist

A painting by the British artist David Hockney was sold for $90.3 million in an auction at Christie’s New York, breaking the auction record for a living artist.

The starting price was $18 million and the $50 million limit was passed in 30 seconds. The painting finally went for 80 million after 9 minutes, with the premium and commission taking the price to $90.3 million.

“Rarely can we say: this is the chance to buy the artist’s best painting. This is such a moment” said Ana Maria Celis, vice president of post-warand contemporary art at Christie’s, when presenting the painting.

Moreover, the painting is considered “one of the great masterpieces of the modern era”, said Alex Rotter, Co-Chairman Post-War and Contemporary Art at Christie’s. As Rotter explained, the work is identified with the “crowning moment” of the two most famous themes of the British master of Pop art: swimming pools and the double portrait, i.e. two figures interacting.

In this particular painting, an elegant man is standing at the edge of the pool, thoughtfully looking at another man who is swimming under water and heading towards him. In the background is an idyllic landscape with trees and mountains.

The standing man is David Hockney’s former lover and muse, Peter Schlesinger, one of his students at UCLA University in Los Angeles. Their relationship lasted from 1966 to 1972. The painting was done in 1972 at the end of their affair and the swimmer, according to Rotter, is perhaps Peter’s new lover.

The painting, which became one of Hockney’s cult works, features on the covers of many books on the artist. It was also one of the highlights in Hockney’s retrospective exhibition in 2017, on the occasion of his 80th birthday.