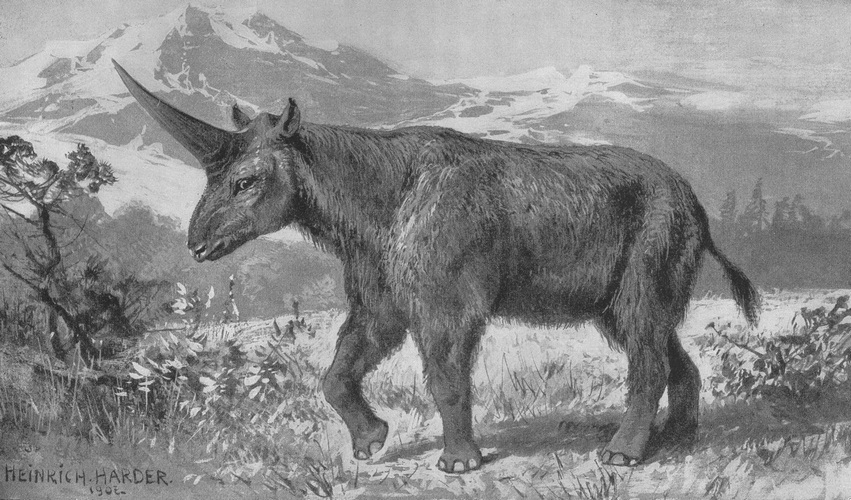 Giant prehistoric ‘unicorns’ once wandered over the prairies of Central Asia. New research has shown that these so-called Siberian unicorns lived much longer than was believed, and probably did not become extinct until ‘just’ 39,000 years ago.

A horn as long as a grown man, the weight of five dairy cows, and a hump that would have made Quasimodo envious: the Siberian unicorn was an awe-inspiring beast. In prehistoric times, this rhinoceros-like animal wandered the prairies of Central Asia, in the region between present-day Ukraine and China. That is, until is suddenly became extinct.

New research has shown that this occurred much later than had been believed for a long time. An international team of researchers from Leiden, Groningen, Russia, Great Britain and Australia discovered that this animal was still walking the earth until 39,000 years ago. They reached this conclusion based on carbon dating and examination of the remains of 25 such unicorns. Until recently, it was assumed that the Siberian unicorn had died out 260,000 years earlier. This new dating makes it highly probable that modern man saw the powerful Siberian unicorn.

‘This new research dates the extinction of the Siberian unicorn to exactly the same time as that of many other large mammals,’ says Thijs van Kolfschoten, emeritus professor of Archaeology at Leiden University.

‘Around 40,000 years ago the earth underwent serious fluctuations in the climate, which also brought about continuous changes in vegetation. Many large herbivores were unable to adapt to a different diet. That’s probably what happened to the unicorn.’

This hypothesis is also supported by the research carried out by Leiden PhD researcher Margot Kuitems. Using isotope research, she discovered that the unicorns had very high and stable ratios of nitrogen isotopes in their bones and teeth. This may indicate that their diet consisted mainly of plants that grow under the ground, such as turnips. This could explain why the teeth of Siberian unicorns continued to grow: feeding on turnips meant that they also ingested a lot of sand, which probably wore the teeth down very quickly.

The researchers also discovered using DNA research that the Siberian unicorn split off at an early stage from the rhino species that are still present on earth today. The Elasmotheriinae and Rhinocerotinae sub-species developed from the Eocene period – between 56 and 34 million years ago – along two separate branches. The extinction of the Siberian unicorn meant the disappearance of the very last representative of the Elasmotheriinaesub-family on earth.