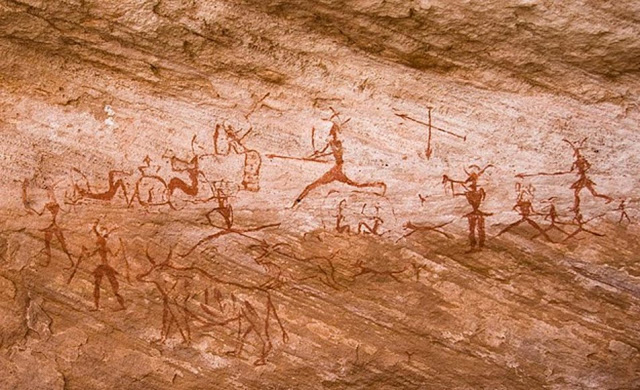 Is it in our nature to go to war? Should we just accept the fact that humans have this innate tendency and are hardwired to kill members of other groups?

No, says R. Brian Ferguson, professor of anthropology at Rutgers University-Newark. There is no scientific proof that we have an inherent propensity to take up arms and collectively kill.

In a study published in Scientific American, Ferguson argues that war may not be in our nature at all. People might fight and sometimes kill for personal reasons, but homicide, he argues, is not war.

“There is definitely controversy in the field when it comes to this question,” says Ferguson, who studies human nature, war and peace. “But it is the overall circumstances that we live in that creates the impulse to go or not go to war.”

In his study, “War May Not Be in Our Nature After All. Why We Fight”, Ferguson reached back thousands of years to look at the historical roots of warfare to shed light on whether humans have always made war or if armed conflict has only emerged as changing social conditions provided the motivation and organization to collectively kill.

It’s a topic he’s been studying since the Vietnam War, a period in history that sparked his interest. His research is an attempt to settle an age-old academic debate over whether humans are hardwired to fight wars or if war is a human invention. If war is not ingrained in human nature, that may help provide a basis for arguing against war as an option, he says.

Many scientists and scholars believe that humans as a species are aggressive, brutal and bloodthirsty and this behavior is part of our DNA. Ferguson argues, however, that there is no real indication or scientific proof that humans have been waging war for the entire history of the species.

“Warlike cultures in some places became common only over the past 10,000 years and in most place more recently than that,” Ferguson says.

In his research, Ferguson looked at cases reported as violent deaths throughout the prehistoric record. He found that 15 percent to 25 percent of deaths that many anthropologists and archeologists say were the result of war may reflect cherry-picking the most violent cases, which are contradicted by broad surveys of all archaeological sites.

“Individual killing is not the same as war on social groups,” says Ferguson. “War leaves physical traces that archaeologists can find. When and where it began is very different in different places around the world, but there are stretches of even thousands of years when there are no clear signs of war.”

Part of the reason for the debate, Ferguson says, is that the evidence used to identify prehistoric warfare – weapons, art and cave paintings, defensive structures and skeletal remains – are often ambiguous and difficult to interpret. Careful examination of all evidence typically finds no strong indication of war in early remains, which changes to clear signs of war in later periods.

He disputes the belief of many scholars that humans may have inherited their genetic makeup from their chimpanzee cousins millions of years ago. After examining every reported chimpanzee killing, Ferguson, who is writing a book on the subject, believes that war among chimps was not an evolved evolutionary strategy but rather a response to human contact and disturbances.

So why did war become so common in more recent archaeological finds? Ferguson says that preconditions that made war more likely became far more widespread, including social hierarchy, a more sedentary existence, a growing regional population, valuable resources and the establishment of boundaries. These conditions have sometimes worsened with severe environmental changes, he says.

Ferguson, who also studies contemporary war, brutal civil wars around the world and U.S. wars in Iraq and Afghanistan, agrees with anthropologist Margaret Mead that “warfare is only an invention, not a biological necessity,” but does he not see war ending.

“Anthropologists think about prospects for war in the long term,” Ferguson says. “If the idea that war is part of human nature is not scientifically supported, alternative futures open up. If more people work for prevention, the eventual eradication of war is a definite theoretical possibility.”