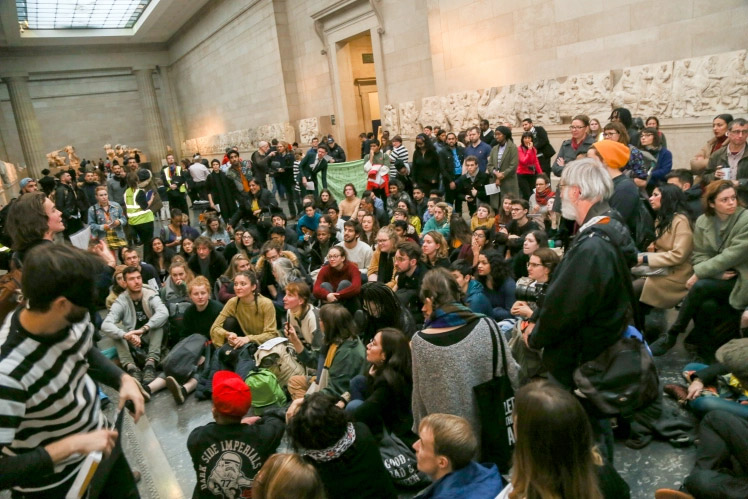 By the activist theatre group ‟BP Or Not BP”

Last Saturday, the activist theatre group “BP Or Not BP” organized an unofficial tour of the stolen artefacts from various countries that are on display in the British Museum. Speaking during the “Stolen Goods Tour” were members of the group with heritage from Cyprus, the Australian Aborigines, Iraq, Hawaii and the Maori of New Zealand.

The first stop made by about 150 people being given the tour was at the “Hall of Enlightenment”. Rodney Kelly, an Aborigine, spoke about the repatriation of the Gweagal shield about which he has been campaigning for the last two years. Kelly, the sixth time great grandson of the warrior Cooman, explained how his ancestor’s shield was taken by Captain Cook, during the first encounter between the British and the Aborigines, in 1770 at Botany Bay.

The next stop was the “Ashurbanipal: King of Assyria, King of the World” exhibition. Here Shahla, of Iraqi descent, expressed her anger at seeing artefacts from Iraq’s cultural heritage being used to promote the British Oil Company BP which supported the 2003 invasion of that Middle Eastern country. “For BP to now sponsor an exhibition of stolen art from modern-day Iraq reeks of moral bankruptcy, and an audacious attempt to whitewash their complicity in war and destruction,” Shahla said.

Ariana Davis, of Maori descent, called on the British Museum to return the 2,300 Maori cultural goods it is holding, acquired in colonial times.

After several stops, the tour ended in the hall of the Parthenon Sculptures, where Danny Chivers, of Greek Cypriot heritage, talked about the removal of the “Marbles” by Lord Elgin at the beginning of the 19th century and called for their return. For many years now, Greek governments have been requesting their repatriation and for this a special museum has been built to welcome them, he explained.

The event by the “BP Or Not BP” theatre group comes at a time of growing pressure put on museum directors across Europe for the repatriation of artefacts of foreign cultural heritage.