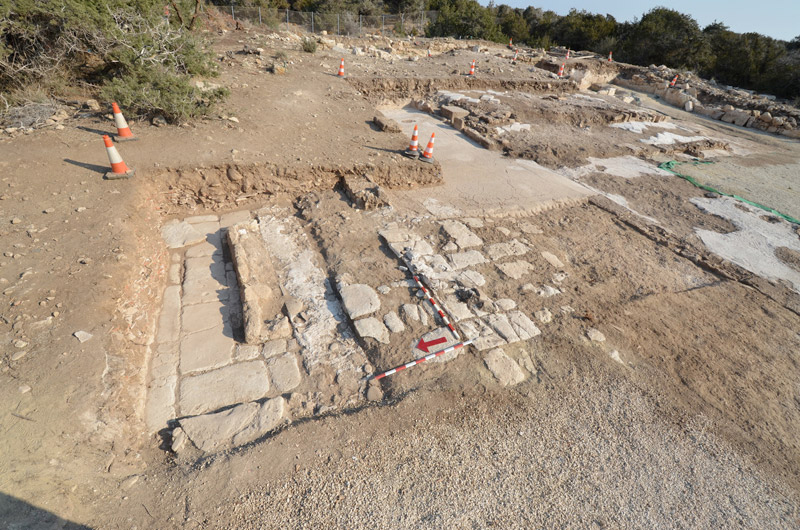 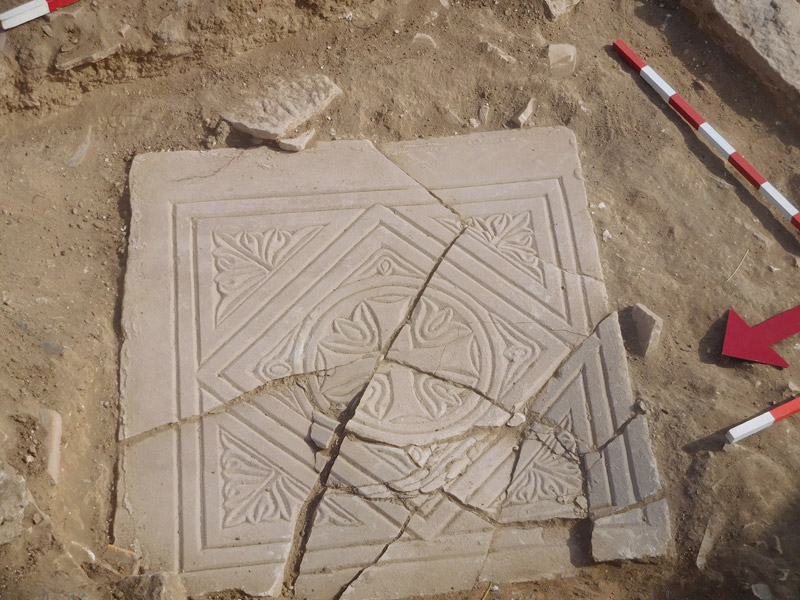 A complex of two churches discovered at Katalymata ton Plakoton

Under the supervision of Dr Eleni Procopiou

The Department of Antiquities, Ministry of Communications and Works announces the end of the 12th excavation season at the site of Katalymata ton Plakoton, which lies on the western coastline of the Akrotiri Peninsula.

The excavation is conducted under the supervision of Dr Eleni Procopiou, Senior Archaeological Officer assisted by seasonal employees (Demetriou Philippos, Theodoulou Theodoulos, Iakovides Linos, Fattas Christos, Philippou Serghios) and the support of the ass. Restorator Orphanou Christos. Mairy Chamberlain, Technician-Draughtswoman, is responsible for the final documentation of the finds.

Excavations concentrated on the south wing of a huge complex, consisting of two monumental ecclesiastical structures to the west and east sides of an atrium, which measures 100 metres in length. Adjacent living spaces lie mainly along the south and the east, but have not yet been excavated. A second atrium was located and partially revealed to the north of Church B’.

The first church was investigated between the years 2007-2010 and belongs to three-aisled transept basilica type, a variation of the cruciform type. It is 36 metres wide and 29m long, without the apse which protrudes to the west, which is part of a raised central platform. The building is paved with mosaic decoration preserved in very good condition.

During the 2018 season, which focused on investigating the second church to the east, the cleaning of the south and central aisle was completed, as well as part of the northern one. The central platform of the Holy Bema was also partially revealed, having along its west side a lower level podium, the ambo, to which an axial corridor (solea) ends, indicating a highlighted Introitus rite of pre-sanctified Holy Gifts.

The above confirm the initial assessments concerning the role of Church A’ as a place for officiating pre-Introitus services and correlations with the ancient Liturgical Typika of Jerusalem and Alexandria (of St. Jacob and especially of St Marcus) have been confirmed. Church B’ belongs to the semi-inscribed cruciform three aisled Basilica type, with an hexastyle propylon to the west, of a total length (including the propylon and the protruding eastern branch) of 46.47 meters and a width of 20 meters.

New mosaic panels came to light, including an inscription with the wish ΚΕ ΒΟΗΘΙ ΤΟΙΣ ΤΟ ΩΝΟΜΑ ΣΟΥ ΦΩΒΟΥΜΕΝΟΙΣ (My Lord help those who honor your name), as well as limestone and marble chancels from the Holy Bema, one of which is in marble and complete.

The particular architectural form of the whole complex, as well as its decorative richness confirm that it can be considered as an extremely important monument of Christianity during the reign of the Emperor Heracleios, echoing in various ways the Persian invasions in the eastern Provinces of the empire, and the hospitality that the refugees, both clergy and lay people, received by the Amathusian Prelate of the Alexandrian seat, John the Almsgiver, during his forced return to Cyprus and before his departure on the 11th of November 619.

The above confirm the initial assessments concerning the role of Church A’ as a place for officiating pre-Introitus services and correlations with the ancient Liturgical Typika of Jerusalem and Alexandria (of St. Jacob and especially of St Marcus) have been confirmed. Church B’ belongs to the semi-inscribed cruciform three aisled Basilica type, with an hexastyle propylon to the west, of a total length (including the propylon and the protruding eastern branch) of 46.47 meters and a width of 20 meters.