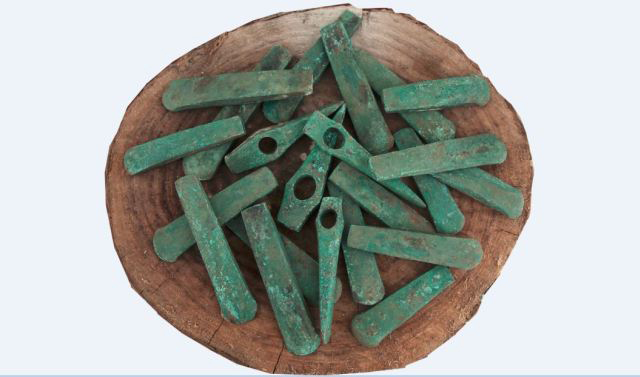 The prehistoric tool hoard contains a total of 22 tools

A hoard of 6,500-year-old Copper Age axes and ax hammers – Europe’s largest such find so far – has been discovered by accident near the town of Polkovnik Taslakovo, Dulovo Municipality, Silistra District, in Northeast Bulgaria.

The discovery of the hoard of prehistoric axes and ax hammers from the Chacolithic (Aeneolithic, Copper Age) has just been announced for the first time by archaeologist Dimitar Chernakov based in the Danube city of Ruse in Northeast Bulgaria, the Ruse Regional Museum of History informs.

Chernakov describes the find in an article in the last issue for 2018 of the Archaeologia Bulgarica scientific journal entitled, “A New-Found Hoard of Chalcolithic Heavy Copper Tools from Northeastern Bulgarian”. The photo of the find is featured on the journal’s cover.

The hoard of Copper Age axes and ax hammers has now been exhibited for the first time for the public by the Regional Museum of History in the Danube city of Silistra.

The prehistoric tool hoard contains a total of 22 tools, including 18 flat axes and 4 ax hammers, with a combined weight of 11.629 kilograms.

The Chalcolithic axes and ax hammers from Bulgaria’s Polkovnik Talaskovo are made of alloy with a high content of copper which was cast into molds.

“The discovered find is the largest [of its kind] in Europe so far. It is a testimony to the [development and sophistication] of the earliest metallurgy in human history,” the Ruse Regional Museum of History says.

“The axes bear hardly any traces that they were used which leads to the supposition that they were not meant for practical purposes but were an indicator of prestige, or were [were used as] means of exchange,” the Museum adds.

In his paper, archaeologist Dimitar Chernakov explains that the prehistoric axes and ax hammers from Polkovnik Talaskovo belong to “the second/third phase of the cultural complex Kodjadermen – Gumelnița – Karanovo VI.”

He points out that the location where the Chalcolithic axes were discovered is “in the periphery of intense long-lasting populating and cultural processes in the area of Kodjadermen – Gumelnița – Karanovo VI.”

The archaeologist says it cannot be ruled out that the copper axes might have been manufactured in some of the large metal processing centers of the prehistoric (Chalcolithic) civilization on the western coast of the Black Sea such as today’s Varna, Durankulak, and Sozopol.

“[The axes were] then prepared and sent for distribution into the internal part of the Balkan Peninsula,” he writes.

The scholar reveals Europe’s largest hoard of prehistoric copper axes and ax hammers was found back in 2013 by accident by local farmers plowing the fields, at a depth of about 1 meter (3 feet).

On top of the ax hoard, there was an egg-shaped limestone rock as well as fragments from pottery vessels.

However, according to archaeologist Vladimir Slavchev from the Varna Museum of Archaeology, who studied the site, the ceramics found there are from a later period, the Late Iron Age.

The site, however, has not been properly excavated, and the archaeologists are therefore unable to say for sure whether the ax hoard was part of a Chalcolithic layer.

Four prehistoric settlement mounds are located in the area where the axes and ax hammers have been found so Chernakov points out it is possible that the hoard might be connected with some of those settlements.

Today’s Bulgaria, the Western Black Sea coast, the Lower Danube Valley, and other parts of the Balkan Peninsula were inhabited by an advanced prehistoric civilization during the Chalcolithic, in the 5th millennium BC, known, among other things, for the world’s oldest gold treasure, the Varna Gold Treasure from the Varna Chalcolithic Necropolis, and Europe’s oldest town, the Provadiya – Solnitsata (“The Salt Pit”) Settlement Mound.

Intriguing Chacolithic discoveries have also been made in other spots in Northeast Bulgaria in recent years such as the town of Kamenovo: a flint tool workshop, with manufactory production, and a necropolis, including a grave of a man holding a stone ax scepter.