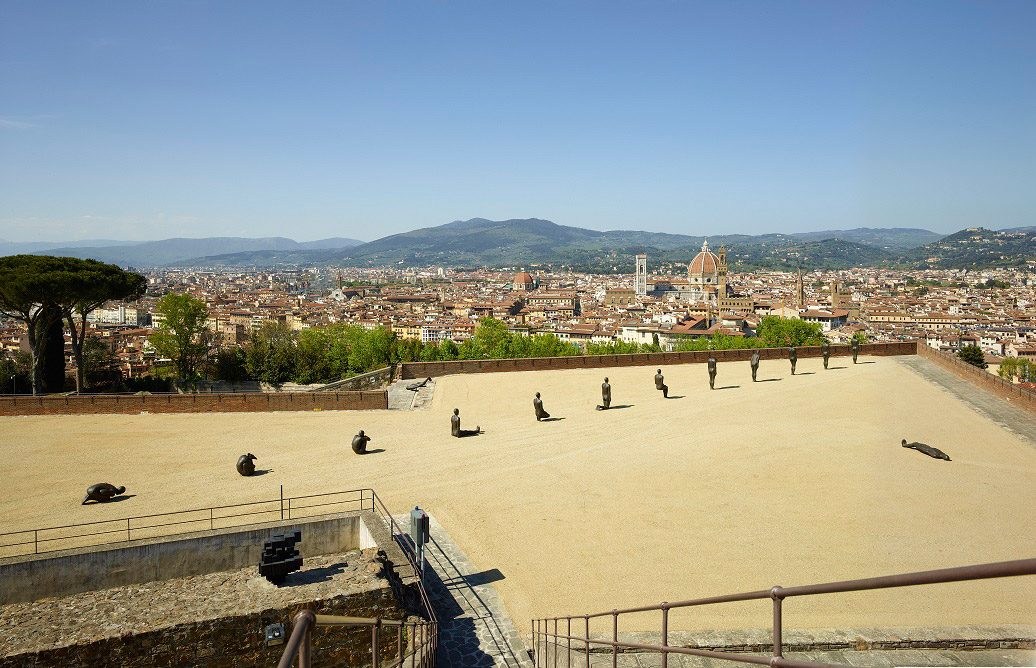 Modern art Installation for the first time on Delos

For the first time Delos, a top archaeological site and a UNESCO world heritage monument, will ‟converse” with modern art and specifically with the work of Antony Gormley, one of the most important contemporary British artists. The exhibition, recently proposed to the members of the Central Archaeological Council that unanimously gave the go ahead to its realization, is a partnership between the Ephorate of Antiquities of the Cyclades and the Cultural and Development non profit Organization NEON. It is to be curated by Elina Koundouri, Head of NEON and Iwona Blazwick, OBE, Head of the Whitechapel Gallery, London.

Anthony Gormley is an award-winning and widely recognized artist for his sculptures, installations and public works exploring the relationship between the human body and space. His works have been on show in many exhibitions in Britain and abroad, while his sculptures feature in public spaces in England and elsewhere, most notably the “Angel of the North” in Gateshead, UK. His big one man exhibition is to take place at the Royal Academy of Arts in London in September 2019. In addition to studying fine arts (he is a sculpture postgraduate at UCL), he has read archaeology and art history at Cambridge.

The installation on Delos entitled “SIGHT” will be on display from May 18 to October 31, 2019, its opening coinciding with International Museum Day. Gormley is known for his human figures in cast iron which are placed outdoors. The installation on Delos will be made up of 29 such life size sculpted figures (four of which have been specially made for the exhibition on the island). They will be placed in various parts of the island, with the visitor being invited to discover them with the help of printed material. Two sculptures will stand in the sea close to the shore, two more in the Archaeological Museum, some on the Kynthos hill, in the Agora of the Competaliasts, at the entrance of the Stadium, on the Stage of the Theater and in other monuments, with most of them being seen in rooms of the Theater District. They will either be free standing , fixed to a sheet of steel (or a steel frame) or secured to a man made stone (or masonry), while studies have been made for the more particular cases, about which the CAC members have been notified.

The whole undertaking of the sculptures’ transport and installation will start in February so that by May it will be completed. The competent authorities of the Ministry of Culture had no objection to the installation being carried out, given the artistic importance and the very good organization of the whole enterprise, which was described as a “very interesting coexistence of archaeological space with visual art works”. The only objection was to one of the two sculptures in the Archaeological Museum (the other one will be at the entrance of the Museum), which, according to the exhibition proposal, would be placed face down on the floor of the hall of Archaic and Classical exhibits. According to the Museum Directorate and many members as well, this particular figure was not considered a successful one and it was requested that either it be removed or a different proposal made.

Head of the Ephorate of Antiquities of the Cyclades, Dimitris Athanasoulis said that the proposal to NEON to put on a contemporary art exhibition on Delos was made by his organization contrary to what is customary, namely a Cultural Organization proposing an artistic intervention. The reason being that ‟Delos is a special example of an archaeological site. It is an island with a unique ancient and natural environment and we were always concerned about the feasibility of having a contemporary artistic installation placed there. After some thought we decided it was worth trying out an intervention worthy of the site. So, unlike other cases, NEON did not come to us, but we went to NEON. Its people found it to be an extremely interesting challenge and asked to consider how the site could be best used so as to become a contemporary artistic event but not at the expense of the site’s value. In other words, the place would not be used as a framework to add value to the artist, but, on the contrary, it would give the site an extra dimension. After considerable thought, it was proposed that an exhibition be held for the first time in Greece by Antony Gormley, one of the top artists internationally.”

Mr Athanasoulis noted that Delos may have global recognition but visitors are few. ‟This year, a record number of people visited it, but nonetheless no more than 180,000. The issues of access to the island and the cost of the ticket are obvious, but this is no excuse for such a low visiting rate. It is necessary to promote Delos primarily with an event of quality addressing a public of quality, so as to advertise Delos in the best sense of the word”. He also spoke about the absolute professionalism of the artist who studied and covered the smallest details in his designs so as to avoid the slightest damage to the archaeological site which had impressed him tremendously. This was made obvious by Mr Gormley’s short video screened at the meeting, in which the artist addressed the members of the CAC. As for the rationale in displaying 29 statues on Delos, this is twofold: To declare the human presence which is absent from the island today and at the same time to emphasize another absence: that of statues of which there were so many in antiquity.

In the final opinion issued by CAC, there were also four minority voters regarding the density of the statues in the Theatre District(it was proposed that they also be exhibited in other spots) and concern regarding two statues almost touching the monuments.