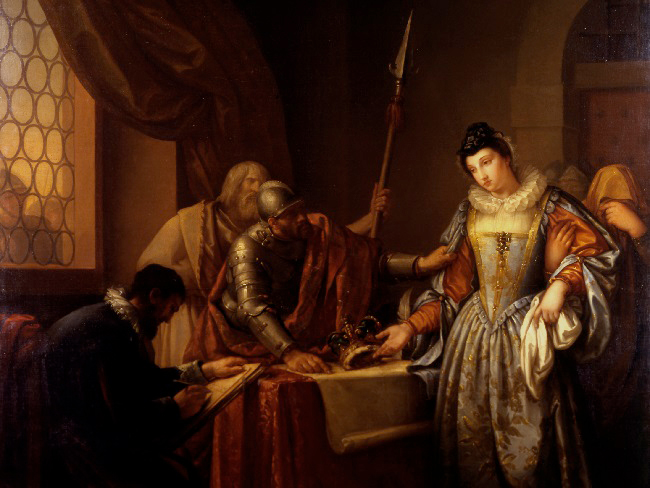 Research on the enduring appeal of Mary Queen of Scots

By the University of Glasgow

She was a Queen who only reigned for six years. Yet more than four centuries after her death, Mary Queen of Scotland continues to polarise opinion and to hold a fascination for the general public.

Now a project led by the University of Glasgow brings together some 40 academics and curators to help understand how her legend has impacted on Scottish society and culture in the intervening years.

For more than 400 years, Mary’s legend has been depicted in popular culture and immortalised in music, books, plays, art and on coins and medals.

And since 1895, the extraordinary life and death of the sixteenth-century queen continues to be told and retold on the big screen.

The latest film, Mary Queen of Scots, which opens in the UK on Friday 18 January 2019, centres on the royal rivalry between Mary (played by Saoirse Ronan) and her cousin Elizabeth I (Margot Robbie).

Dr Steven Reid, a Scottish Historian based at the University of Glasgow’s College of Arts, and Anne Dulau-Beveridge, a curator at The Hunterian have been awarded funding for a two-year research network project on Mary from the Royal Society of Edinburgh.

Dr Reid said: “Our project will look at what is it about Mary’s life and her story that gives it such appeal and endurance – why does she remain such a source of fascination and debate? Why do historians, authors and artists continue to re-imagine her? To date, there have only been a handful of works exploring Mary’s posthumous reputation.

“This project will undertake a detailed and holistic assessment of Mary’s reputation and depiction in popular culture, from the end of her personal reign in Scotland through to the present.

“It will focus on objects held in Scottish archives and national collections. Through this corpus, it aims to explore and understand how Mary has been remembered and what the changing representations of Mary tell us about evolving attitudes to gender, monarch and religion as well as Scotland’s own perceptions of its history.”

Already the University of Glasgow team have found hundreds of objects about Mary in its own Archives, Special Collections and Hunterian collections.

This includes a rare medal commemorating the marriage of Mary to Lord Darnley in 1565 and a Mary Queen of Scots Thirty-Shilling Piece from 1555 (Mary’s coinages were the first to feature portraits of a female monarch).

Another key piece in the University’s Archives is a letter of gift (dated 13 July 1563) from Mary, offering much-needed financial support in the form of land grants and endowments to the university.  The installation of a Scottish Protestant parliament in 1560 and the disintegration of Catholicism jeopardised the University’s very existence, and Mary’s grant played an important role in keeping the University solvent through this difficult period in its history.

One of the key Queen Mary pieces in The Hunterian’s collection is a romanticised painting by Gavin Hamilton (1723-1798) called The Abdication of Mary, Queen of Scots. This painting inspired the University of Glasgow to look more in-depth at Mary’s posthumous reputation.

Ms Dulau-Beveridge said: “This project grew from a simple idea to explore the making and meaning of the depiction of Mary Queen of Scots by Gavin Hamilton.

“The painting was commissioned by James Boswell, the 18th century author and biographer. And in fact Boswell and Hamilton corresponded for more than 10 years to decide on which sources should be used to help with the depiction of Mary on canvas.

“I think both were aware of the importance the painting would acquire in later years, as it was the first history painting depicting the life of Mary.”

She added: “It soon became apparent that this commission was only one sign of a renewal of interest in the life of the Queen in 18th century Britain. This included The Hunterian’s own founder Dr William Hunter who gathered key texts about Mary.

“This led to discussions with colleagues across the University and the result was to take this further and look at Mary’s reputation and depiction in popular culture.

“Already this project has borne fruit to show that the University owns one of the most significant collections of Mary Queen of Scots materials in Scotland. We are now looking forward to seeing what other interesting facts and finds that this new research, generously supported by The Royal Society of Edinburgh, will uncover.”

The areas that the project will look at over the next two years include:

– The noticeable absence of Mary from Jacobite memorialisation;
– The collection and consultation of Mary memorabilia by famous intellectuals including William Hunter, Sir Walter Scott, and George Washington;
– The explosion in eighteenth/nineteenth-century engravings of Mary, featuring wildly varying portraits;
– The industry of Mary Queen of Scots rings produced in the 1820s;
– The Victorian mania in the 19th century for formal staged photographs of young women as Mary and her attendants. A collection of which are housed in the Scottish National Portrait Gallery.

From this project, a dedicated exhibition on the memorialisation of Mary will be hosted at The Hunterian in 2022.