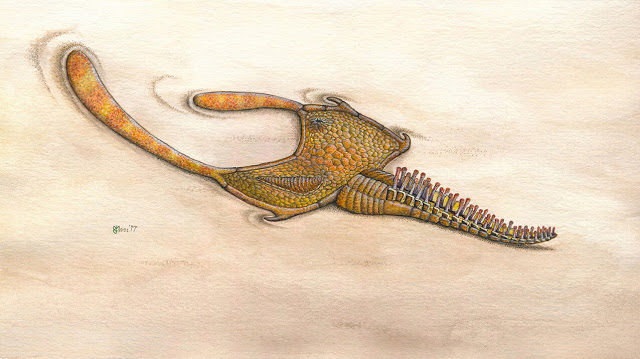 These strange fossils are closely related to sea urchins

Just a few centimeters long, these animals thrived in the ocean roughly half a billion years ago. Because of their odd morphology, scientists have long struggled to find their branch on the tree of life.

Was their long appendage similar to a tail? That would make them ancestors of the vertebrates. However, their skeletons are made up of many calcite plates, suggestive of the bodies of echinoderms like sea urchins and starfish, even though they lack the characteristic symmetry of these animals.

A team led by Bertrand Lefebvre, a CNRS researcher at the Laboratoire de Géologie de Lyon, could finally settle this 150-year-old debate, using exceptionally preserved fossils from the Bou Izargane excavation in Morocco.

Very unusually, the soft tissues of the fossilized creatures were preserved as pyrite, a ferrous mineral. By mapping the distribution of iron within the fossils, the researchers were able to clarify the fine structure of the appendage, which turns out to be comparable to that of a starfish arm. So these organisms had neither a head nor a tail, but rather a feeding arm.

The findings are published in the journal Geobios.