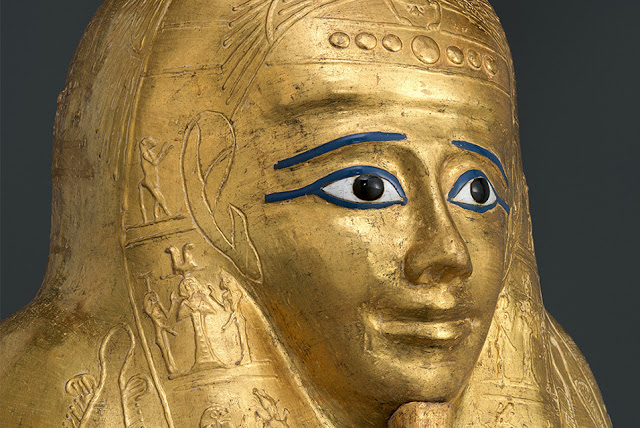 The Metropolitan Museum of Art returns coffin to Egypt

The Metropolitan Museum of Art announced last week that it has delivered the gilded Coffin of Nedjemankh, for return to the Government of Egypt by the Manhattan District Attorney’s Office, after having learned the Coffin was looted from Egypt in 2011.

The Museum learned of the looting in recent months and has been fully cooperative with the investigation of the District Attorney’s Office. The Museum purchased the Coffin, inscribed with the name Nedjemankh, a priest of the ram-god Heryshef, in July 2017. All of the Museum’s acquisitions of ancient art undergo a rigorous vetting process in recognition of the 1970 UNESCO treaty, in adherence to the Association of Art Museum Director’s Guidelines on the Acquisition of Ancient Art and Archaeological Materials, and in compliance with federal and state laws.

Per the investigative work of the Manhattan District Attorney, the Museum has recently learned that it received a false ownership history, fraudulent statements, and fake documentation, including a forged 1971 Egyptian export license for the coffin. The Met is cooperating fully with the District Attorney’s Office, and will consider all available remedies to recoup the purchase price of the coffin.

The Met’s President and CEO, Daniel Weiss, commented: “After we learned that the Museum was a victim of fraud and unwittingly participated in the illegal trade of antiquities, we worked with the DA’s office for its return to Egypt. The nation of Egypt has been a strong partner of the Museum’s for over a century. We extend our apologies to Dr. Khaled El-Enany, Minister of Antiquities, and the people of Egypt, and our appreciation to District Attorney Cy Vance, Jr.’s office for its investigation, and now commit ourselves to identifying how justice can be served, and how we can help to deter future offenses against cultural property.”

Notwithstanding the representations that the coffin had been exported from Egypt in 1971, recent evidence suggests it was looted from Egypt in 2011.  Manhattan District Attorney Cy Vance said, “Stewards of the world’s most important artifacts have a duty to hold their acquisitions to the highest level of scrutiny. Following my Office’s investigation, this beautiful piece of ancient Egyptian history will soon be returned to its rightful place. Our Antiquities Trafficking Unit will continue to root out stolen antiquities in our fight to stop the looting of historic sites and the trade of stolen artifacts around the world.”

The Metropolitan Museum of Art announced last week it will review and revise its acquisitions process.  Max Hollein, Director of The Met, said, “Our museum must be a leader among our peers in the respect for cultural property and in the rigor and transparency of the policy and practices that we follow. We will learn from this event—specifically I will be leading a review of our acquisitions program—to understand what more can be done to prevent such events in the future.”

The mummiform Coffin was inscribed for Nedjemankh, a high-ranking priest of the ram-headed god Heryshef of Herakleopolis. The elaborately decorated surface includes scenes and texts in thick gesso relief that were intended to protect and guide Nedjemankh on his journey from death to eternal life as a transfigured spirit. The Coffin’s exterior is sheathed in gold, which—because of its permanent nature—was associated in ancient Egypt with the gods and the divinized dead. According to ancient texts, the use of gold in the Coffin would have assisted the deceased in being reborn in the next life.

The Met took the Coffin off view this week and delivered it to the District Attorney’s Office. The Coffin has been the centerpiece of the exhibition Nedjemankh and His Gilded Coffin, which opened in July 2018 and has, to date, been viewed by 448,096 visitors. It was displayed with 70 other works from The Met collection, including an imitation leopard skin once worn by a priest and a display of funerary objects depicted in a scene on the Coffin.

NOTES
1. The Metropolitan Museum of Art