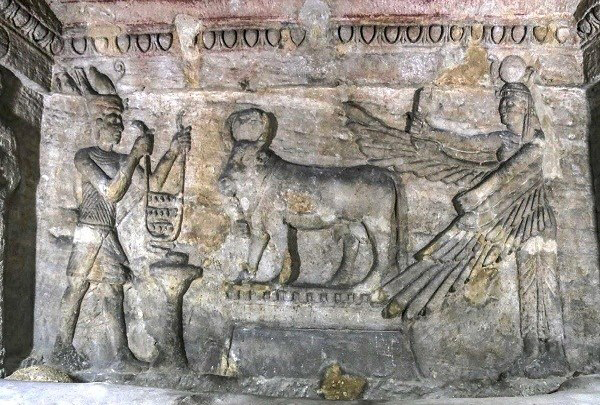 Reconstruction and conservation of two tombs in El-Wardian

In the Kom El-Shuqafa archaeological site of Alexandria

The Ministry of Antiquities has completed the reconstruction and conservation of El-Wardian tombs no. G990 and no. G989 in the Kom El-Shuqafa archaeological site in Alexandria. Both tombs were on display in the garden of the Greco-Roman Museum but were dismantled and transferred in 2009 to the Kim El-Shuqafa archaeological site within the project of development and restoration of the museum.

Ghareeb Sonbol Head of the Central Conservation Department at the Ministry of Antiquities explains that the works were carried out according to scientific methods and using non-invasive materials during the reconstruction.

Sonbol pointed out that the reconstruction work of tomb no. G989 began in November 2017 and completed in 2018, while fine restoration work started immediately. A special entrance was then created to facilitate its visiting.

The reconstruction and restoration work in tomb no. G990 began in February 2019 it is now almost completed except the ceiling and the tomb’s front pillars.

Head of the Central Department of Antiquities of Lower Egypt Dr. Nadia Kheidre, said that the two tombs were part of the Alexandria western cemetery which was known as “the city of the dead”.

Both tombs were discovered by Evaristo Breccia in the Al-Wardian site in the first decade of the 20th century, where they were carved in the rock and there walls are decorated with paintings.

In 1952 both tombs were transferred to the Greco-Roman Museum.
Tomb no. G990 goes back to the Ptolemaic era and consists of a
burial chamber with vaulted ceiling bearing remains of colours.
It’s walls are decorated with geometric signs and it has a
sarcophagus with head rest.

Tomb no. G989 goes back to the Roman Period and its burial chamber
has two columns with pillar crowns and a semi-circle ceiling.