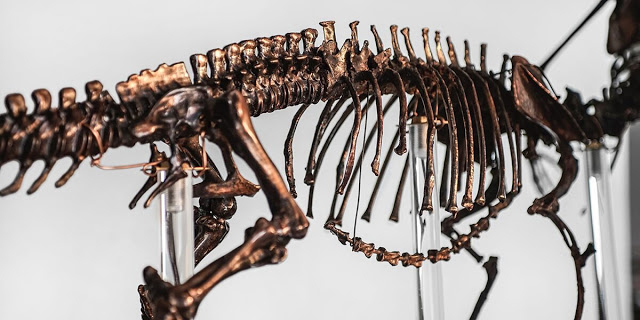 'Rather like a coat of fresh paint only a millimeter thick'

Paleontologists are used to finding dinosaur bones and tracks. But remnants of soft tissue, like muscles or skin, are rare and often not well preserved. A very small percentage of tracks – much less than 1% – show skin traces.

“These are the first tracks ever found where perfect skin impressions cover the entire surface of every track,” Lockley said. The skin patterns of different groups of dinosaurs varied and, like fingerprints, were signatures of differences in anatomy.

The skin traces come from tracks of the smallest known theropod, the Minisauripus. The footprints are only an inch long, and the scientists were able to find perfectly preserved skin traces on them. This was the 10th discovery of a site with Minisauripus tracks and the first to show skin traces.

The tracks, found during large-scale excavations, were nearly lost. Kim, who is in charge of predevelopment paleontological survey and rescue, was able to stop the excavation when he spotted the first track on a broken slab. With the help of his team, he found four more tracks with perfect skin traces.

How to perfectly preserve dinosaur skin

“The tracks were made on a very thin layer of fine mud,” Lockley said, “rather like a coat of fresh paint only a millimeter thick.” When the blackbird-sized dinosaur stepped on this firm, sticky surface, the skin texture of the foot was reproduced perfectly, without slipping or sliding.

Evidence shows that, just before the tracks were made, there had been a rain shower leaving water-drop impressions. In one place, the dinosaur had stepped on a fresh rain drop mark, proving rain came first, and the dinosaur step came second. All this delicate evidence was preserved by being gently covered with more fine mud.

The ultimate secret of skin care

The texture of the dinosaur skin is the grade of a medium sandpaper, but with the tiny scale traces in perfect arrays, like a well-woven fabric. Each little scale trace is only a third- or a half-millimeter in diameter and very similar to rare examples of mummified skin seen on the feet of a couple of feathered birds from China. But the team noted that, although the skin texture is the same, the shape of the feet of the Chinese birds and the Korean dinosaur were quite different.

The paper reports the skin pattern as similar to examples from much larger, carnivorous theropod dinosaur tracks, in which scales are much larger but never preserved across the whole footprint.

The more distantly related giant brontosaurs had scales that left traces 2-3 centimeters in diameter, the size of a quarter. So the delicate, perfectly preserved Minisauripus skin texture is like a shrunken version of the skin of a much larger relative, with no shrinkage of the skin traces.

“This is the ultimate secret of skin care,” Lockley said.