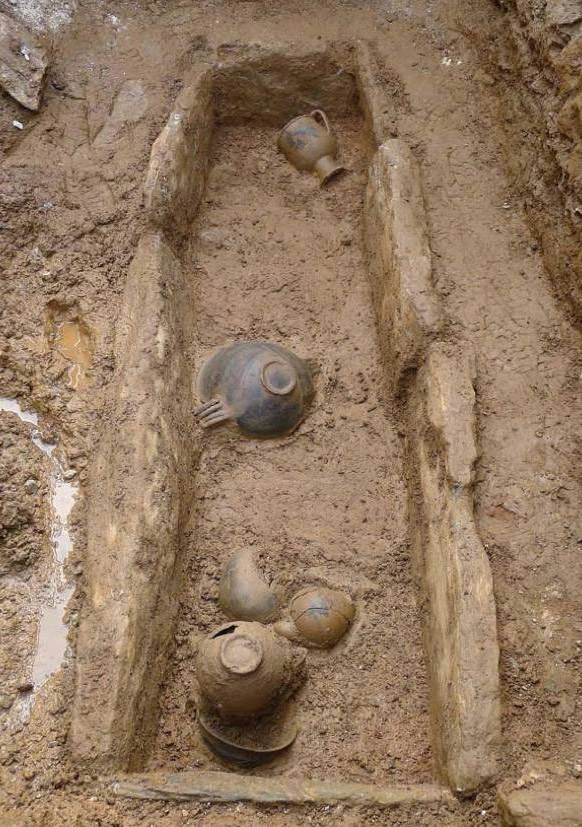 The story of the young noblewoman from Ippeios entranced the public

Transporting it back to the 8th century BC

The grave of an eight-month pregnant young noblewoman from the plain of Ippeios in Central Lesbos, killed during a strong earthquake, transported the people of Mytilene back to the 8th century. It is on display in an impressive exhibition that has just begun as part of the event “Unique exhibits in the Archaeological Museum of Mytilene” organized by the Ephorate of Antiquities of Lesbos.

When presenting the finds, Head of the Ephorate of Antiquities of Lesbos, Pavlos Triantafyllidis talked about the history of the region of Ippeios that comes to light through this particular excavation and other random finds in the area, since no systematic dig has yet been conducted.

The story of the young woman’s end was impressive, as speculated by studying the finds: her severe injuries suggest that she found a sudden and uncalled for death during a catastrophic natural or other event, in the 8th century BC, possibly from a strong destructive earthquake, said Mr. Triantafyllidis, adding that “Lesbosis situated in an earthquake zone with many rifts, such as that of nearby Larsos”.

According to the archaeologist, “the 8th century is also the mythical, Homeric period of heroes, warriors, nobles who bore the heavy burden of the earlier tradition of the royal dynasties of Lesbos. The noble races that were associated with the Penthelid kings as well as the thriving class of aristocrats made up of landowners and traders because of the sea farers living in ‘the beautifully built’ Homeric Lesbos. The find of the untimely dead woman of the 8th c. BC seems to be linked both with this generation, i.e. the aristocratic class in Lesbos, as well as to that of the buried nobles of the 9th century BC from Ippeios”, argued the Ephorate Head, linking the monument with the island’s long social history.

Apart from its other finds, however, the singularity of the Ippeios grave lies in its gold jewellery, the only ones of their kind in Greece and directly related with the gold jewellery of the 8th and mainly the 7th c. BC from Asia Minor.

“Two gold earring clips were found near the skull’s temples that would have secured the young noble woman’s well combed hair to her ears. The earrings were decorated with spirals and the decorative technique of granulation, i.e. with small gold granules mounted as decoration on the earring’s smooth surface. This was an extremely difficult, arduous technique, requiring from the goldsmith who made them to be particularly skilled in his craft. The gold earrings come with a large biconical gold bead made of thin gold leaf, folded at the edges which are decorated with rows of dots, as well as a bronze bead from a necklace probably adorning the dead woman’s neck”, said the Head of the Ephorate of Antiquities of Lesbos.

The talk by Pavlos Trantafyllidis was followed by “the anthropological study of the noble woman of Ippeios, Lesbos” presented by anthropologist Photini McGeorge. The event closed with an excerpt from the “Lament for Hector” recited by actor and professor of French Literature Ioanna Giannakou.