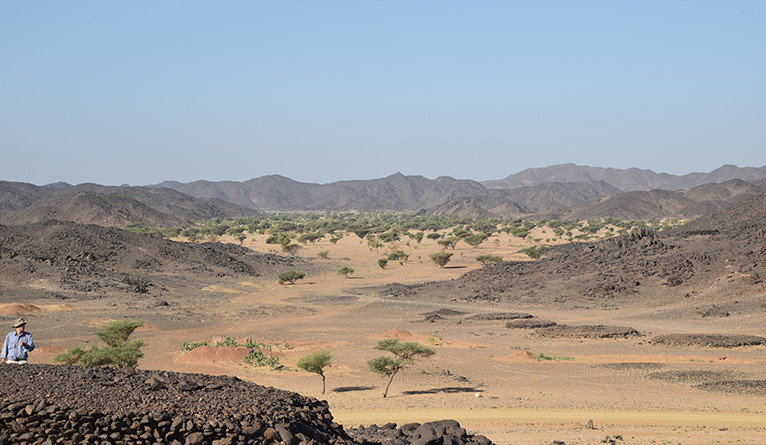 Archaeological expedition to the Sudanese desert

Collegiality and wealth of archaeological finds

Julien Cooper loves exploring places on the periphery. From hiking in his native Australia to trips to remote locations throughout Europe with his family, Cooper, a postdoctoral research associate in Yale’s Department of Near Eastern Languages & Civilizations, has always enjoyed going to locations for the sole purpose of being off the beaten track.

Even the ancient cultures that he studies are from far-flung areas — the remote desert in the Republic of Sudan. Cooper led an archaeological expedition there to further his research about the Egyptian pharaonic civilization, particularly how the ancient pharaohs and various civilizations in ancient Egypt and Sudan obtained gold from this distant desert. The team also wanted to assess antiquities threatened by goldmining. This trip marked the first time that Cooper served as director of an international mission.

“The study of these cultures combines two of my passions: archaeology and being in the middle of nowhere,” says Cooper.

The six-person expedition of Sudanese, Australian, British, and Swiss researchers to the Sudanese desert east of the Nile was three weeks long and covered about 1,250 miles — “about as long you can go in the desert,” says Cooper. The team camped at 10 sites over the course of 14 days.

The archaeologists undertook their expedition to the eastern desert of Sudan with the intention of researching the ancient nomads of the region and also assessing antiquities threatened by goldmining. Due to the nature of the itinerary, each site was only visited briefly, with a short amount of time to take measurements and photographs and sometimes sketches. No excavations were undertaken.

Travel in this desert had its challenges, says Cooper. “There were no roads, so we drove through sand in an all-terrain vehicle. There were very few local water sources and no villages to obtain more gas to fuel the cars. We constantly monitored our supplies to make sure we had enough to get back to the Nile River.

“Digging our four-wheel-drive out of the sand was an almost daily occurrence,” he adds.

Still, he says, the trip was well worth the struggle. What Cooper and his team’s exploration revealed was that this remote Sudanese desert was rife with discoveries about the area’s ancient, and modern, denizens.

“There is a wealth of archaeological finds in this desert,” says Cooper, much of which were created by an ancient indigenous nomadic population. “Ancient texts call these people the ‘Medjay’ or the ‘Blemmyes.’” These nomads are well known in Egyptian and classical texts as nomads of the Eastern Desert, who frequently came to the Nile to trade, raid, and seek employment in Egypt. In distant medieval Europe they were infamously depicted as grotesque headless beings who raided monastic settlements in Egypt.

Cooper and his colleagues considered themselves lucky to find two or three new sites. “Most expeditions are excavating and recording sites well known to scholarship, and they’re hoping to find out more about that site, whereas our mission this year is a bit unique in the sense that we want to find new sites.”

To find the sites, Cooper and his team relied on satellite photographs and an archival report Cooper found that detailed a trip taken by archaeologists in 1930. The team also used a GPS and satellite photos to identify some sites, while others “we just stumbled across,” says Cooper, like the time they found a rock art tableau with a depiction of a fleet of boats, about 13 in total — an unexpected discovery for the archaeologists, and one of the southernmost examples of this kind of rock art, which dates from the earliest periods of Egyptian civilization (c. 3500-3000 BCE).

“There is ritual symbolism behind the portrayal of boats in the desert,” says Cooper, explaining that the illustration of a boat was akin to depicting home for the ancient Egyptians, who would use boats like those depicted to traverse the Nile River.

Cooper, who came to Yale in 2018, says that he and his colleagues were able to determine that this desert was much more important to the Egyptians than was previously thought. Cooper explains that trade-routes crisscross the desert, and the region must have been much been a key conduit for various goods, notably gold.

“What this discovery [of Egyptian art] is telling us is that ancient Egyptians and other ancient Nubian cultures were using the trade routes in the desert with a lot more regularity than previously believed. This finding changes our understanding of the foreign imperialism in this desert. The ancient Egyptians moved into this desert, which was inhabited by foreign nomads, to mine gold as well as trade with nomads. They then used the gold to make various objects and, more famously, statues and other royal regalia.”

The team also recorded an ancient gold mine and a large cemetery with disk-shaped tombs. On one tomb a number of fertility figurines were found lying on the surface. “We are one of only two other missions that have ever found these figurines,” says Cooper. “Recording the gold mine was really interesting, as the distinct type of local pottery suggested the mining settlement was dominated by local nomads rather than foreigners.

The team was amazed at how many sites you could locate if you just went over one hill or explored a new valley. “The reason for the rich archaeology in this region is that the desert is so dry and it keeps all of these sites intact on the surface. And while we don’t have leftovers of organic remains, we have all of these surface artifacts, rock-art, gold mines, and cemeteries with hundreds of tombs,” says Cooper.

The archaeologists were also intrigued at the sight of trees in the desert. “This isn’t an average desert. It is much more mountainous and a higher elevation than the average, so gets a bit of mist and rainfall every now and then, both of which makes it not quite as hyper-arid as you would expect elsewhere in the large Sahara Desert,” says Cooper.

One of the biggest revelations for Cooper and his fellow archaeologists was the collegiality that they encountered even in this remote location. “When you’re in the desert you feel like you’re all part of one society because of the harshness of the area,” says Cooper. “Whether you’re a goldminer, a nomad, or a Yale archaeologist, you all try to help one another.”

On one occasion the team came across a gold miner whose car had crashed and overturned — leaving him stranded, dehydrated, and in need of water for his radiator. Cooper and his team shared some of their spare water with him. Another time it was Cooper’s team that needed help. “We had too many flat tires, and one of our spares didn’t work. We came across a lorry run by local nomads, which had an air pump on the back of it. In the back of the lorry were kids, livestock, and chickens. These nomads were happy to stop on the mountain pass for almost an hour to pump up all of our tires,” says Cooper.

“It’s a fascinating thing for me to see and experience because you don’t always get that kind of neighborly support in western societies. The nomads would show us new parts to a site we were exploring,” he notes. “I feel like the desert is a special place because everyone does help each other, partly because you’re so far away from the relative comfort of the Nile. Even if it means losing three or four hours — or even a day — of work, you look after one another.”

Cooper, who estimates that he and his team probably discovered only one-tenth of what can be found in this area of the desert, is looking forward to leading the next sojourn at the end of this year.

Travelling through much of the desert allowed the team to make a brief assessment of the risk that these sites and this desert face from modern goldmining, which in some cases has resulted in destruction of archaeological remains. Particularly at risk, says Cooper, are the vestiges of ancient goldmining itself, namely the ancient miner’s huts and the geological remains of goldworkings.

“One of the reasons I want to go into this desert is to preserve its heritage while it still exists. Sudan is experiencing a goldmining boom, which has the potential to destroy the cultural heritage that exists there. The way forward is collaboration between the gold miners and archaeologists,” says Cooper.