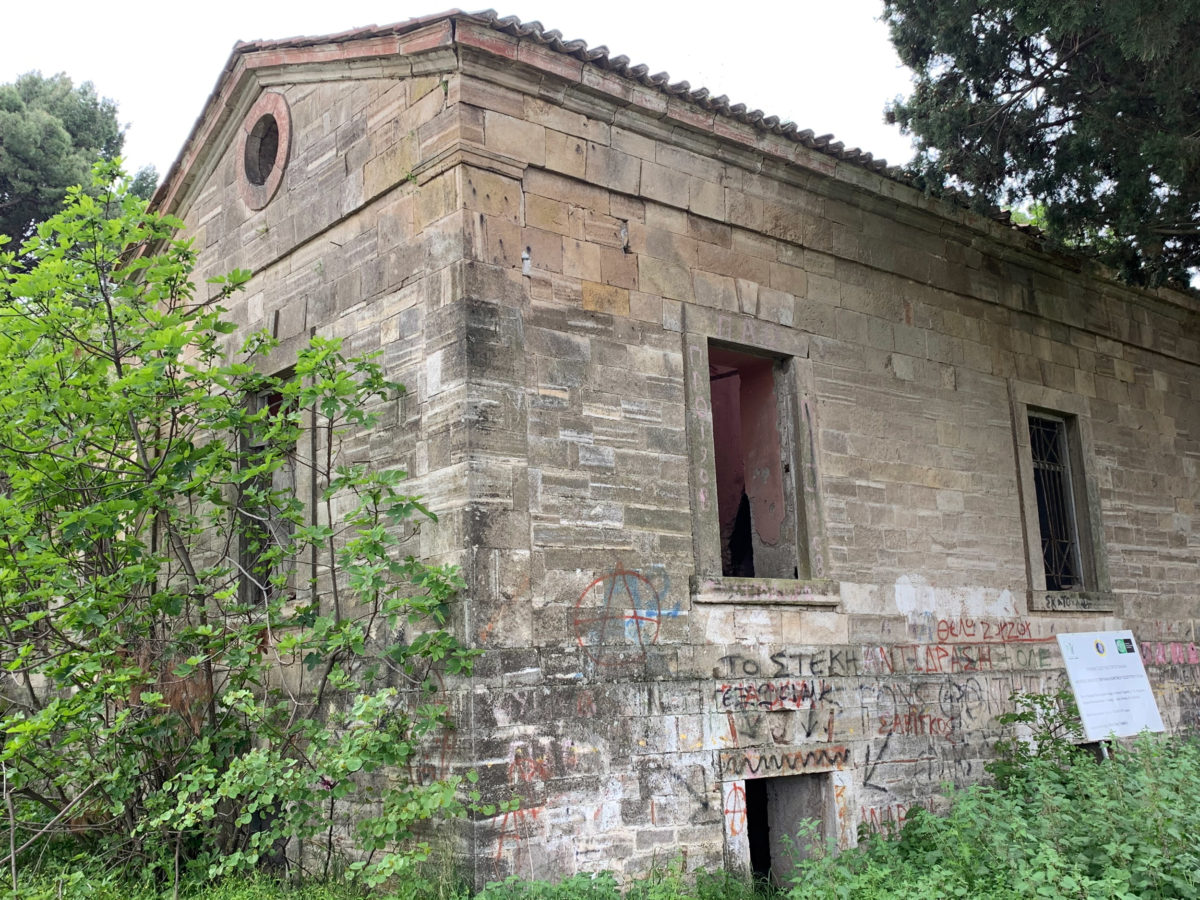 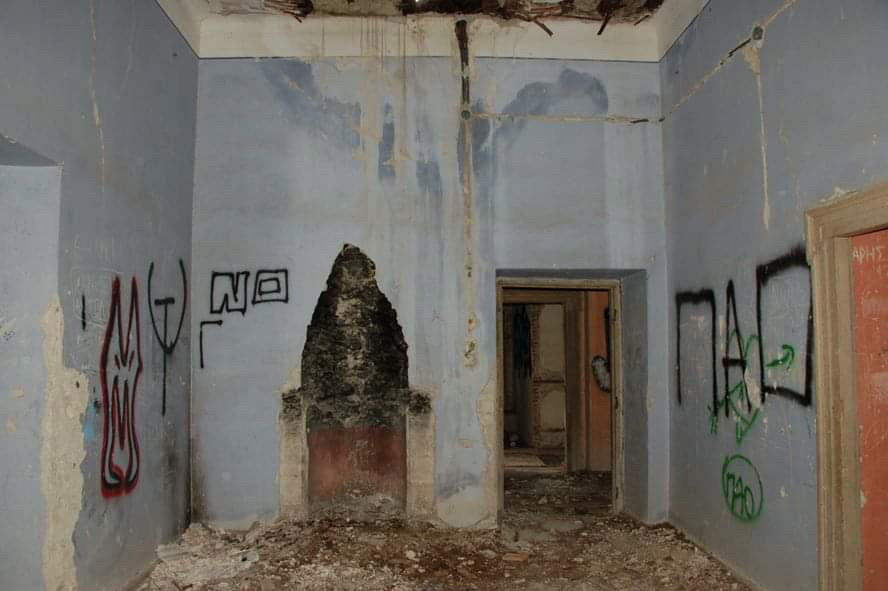 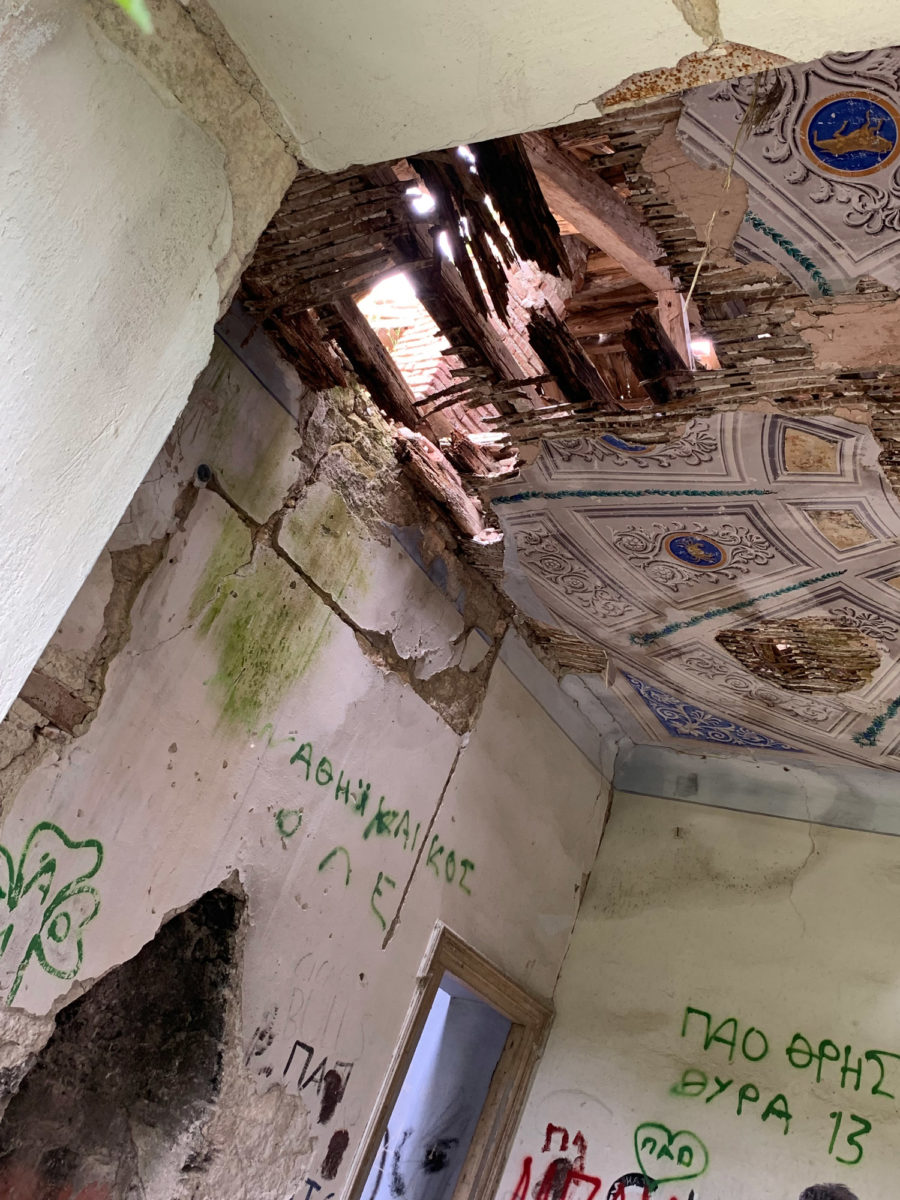 The Tombazis Mansion, a masterpiece of architecture at Kechries

The Tombazis Mansion, a masterpiece of architecture at Kechries

Aquarius, Leo, Gemini and all the other signs of the zodiac painted 180 years ago with great skill, have been patiently waiting for almost five decades for the artist who will make sure they remain in place on the ceiling of the large reception room of the exceptionally designed Tombazis mansion. They are waiting for the moment that the ‟konak” (mansion), as it is called by the locals in the small village of Kechries in North Euboea, comes to life and visitors will again look up at the ceiling to admire a magnificent example of the old trompe l’oeil technique.

It is a bet that needs to be won by the Municipality of Mantoudi in Limni, Aghia Anna, to which the mansion belongs, so that a tiny piece of history can be saved at the eleventh hour. If the walls of the damaged and looted mansion could speak, they would have a lot to say about this spot in a little known village which was the meeting place of many important families in the region. They would also tell us about the area’s economy and its inhabitants’ living conditions and would inspire some Greek author other than Yannis Maris to write his own ‟Secret of the White Rock”.

From Kara Ali to Tombazi

The region of Kechries seems to have been inhabited from the Proto-Geometric era, the village first being recorded in 1474 in Turkish account books with 25 taxable families (today there are no more than 500 inhabitants). Legends and traditions have linked the existence of a small spring on the site of Logota with the medieval village by that name and the passing through of Vincenzo Kornaro’s legendary hero ‟Erotokritos”.

At the time of the Turkish occupation it had been the territory (tsiflik) of Kara Ali, but after the liberation, Ioannis Kapodistrias would hand over a significant part of this region to the brothers Emmanuel and Iakovos Tombazis for their significant contribution to the 1821 revolution, in whose aid they had offered their fleet. Much later, in 1925, by decision of the Greek government, a considerable part of the territory was expropriated and given to those without land.

This was how the old naval family from Hydra, originally from Vourla, Smyrna and having settled on the island in 1668, also found itself in Kechries in Euboea. There, around 1838, they would place the foundation stone of a mansion that is a very beautiful example of neoclassicism and which would be completed around 1864. It is said that the building’s architecture had features in common with those of the mansion the family maintained in Athens, at a time when neoclassicism prevailed in the city. In 1890, in fact, Eric Tombazis, son of Emmanuel, decided to construct the ‟Thermai Sylla” hotel in Edipsos, well known even today and, as mentioned, its cornerstone was the same as the one of the mansion in Kechries.

A point of reference

Tombazi’s mansion, built on the south side of the village, was and still is a reference point for many different reasons. Approaching it one sees big storerooms left and right where the crops were kept, stables, a smaller building that probably housed the guards and caretakers and two large cisterns to collect rain water and much later the resin from the pine trees in the region. In the background is the mansion (even today surrounded by pine trees and myrtles) which was the heart of the region’s economy. Almost all the locals depended on the ‟konak” and worked for it over many years…

Those who had the opportunity to explore the interior spoke of its unique decoration. If one excludes the kitchens, the bathroom (yes there was an indoor bathroom!) and the corridor that runs right through the 345 sq. m. house, all the rooms had intricate fireplaces and ceiling paintings, each of them different and extremely beautiful. The reception room was the most imposing of all, which one walked into from the mansion’s central, east entrance. Approached by a marble stairway, the room was impressive. A great fireplace on the left side with a piano by the window, chaises longues, armchairs, sofas upholstered with fine fabrics, tables with their carved chairs, fine china and crystal, venetian mirrors, paintings that adorned the walls; Above all, however, the ceiling where the signs of the zodiac were depicted in the same formation as sun rays, in vivid colours.

The beginning of the end (?)

The Tombazis mansion was inhabited uninterruptedly, particularly in the spring and summer months, until the beginning of the 1970’s. At this moment in time however, Marianna Sigourou-Korka who was essentially the last heir, would seal the doors of the mansion and never open it again. She would often go to Kechries from Athens to see to the finances of the former tsiflik (renting of the land, the pine wood etc) with her representative. She would reside however in her hotel the ‟Thermai Sylla” in Edipsos, which for some time now has changed hands.

At the start of the 1980s the ‟konak” had not only lost its prestige but it had literally been stripped bare. With the community’s initiative, storerooms, stables, auxiliary buildings were demolished because, being neglected, they apparently presented a health (?) threat. ‟Don’t go to the konak” was what most mums told their kids who were only too eager to explore it. Soon the service entrance on the mansion’s west side was to be broken into, the mansion was gradually looted and suffered tremendous damages.

‟They even tore out the bricks from the fireplaces and removed parts of the painted ceilings”, said Mr Nikandros to the Athens and Macedonian News Agency, while Mrs Sophia adds: ‟They didn’t only take whatever was in the house such as furniture, plates, ornaments and even clothes but they also destroyed the books. In the room used as an office, there were wall to wall bookcases. They’re all gone. For a long time you could find torn books around the house and many of these were foreign”.

Does anyone know what ‟wealth” was hidden in the office of the Tombazis mansion? Especially since the extremely cultured Marianna was the daughter of the important scholar and diplomat Marinos Sgouros. On his father’s side, his origins were from the Segur knights of Normandy who settled in Zakynthos in the 15th century, and on his mother’s side he hailed from the Italian Sforza family…

Who knows why Marianna (who preferred to be called Tombazi and who named her only son Eric in honour of her grandfather) did not take any measures whatsoever to protect her property when she learned it had been violated. She died of cancer at the end of the 1980s and her fortune was managed by a committee, since Eric is a person with special needs.

Today a basket ball court takes up the front of the mansion which is a shadow of its former distinctive self. The roof is collapsing. Three ceiling paintings have survived, despite adverse conditions, out the seven that existed in the mansion’s eleven rooms. The floors have collapsed in many places, either due to natural wear and tear or because of fire (?). There are no cupboards in the rooms.The fireplaces have been dismantled. Stones have been removed from the central, east entrance and also from the veranda and stairway of the west entrance. Forget about the railings and statues that adorned the galleries. The outside walls are ‟decorated″ with graffiti. Only the pine trees remain along with the myrtles that take you back to long gone days with the rustling of their leaves.

‟Something must be done”, says Mr Nikandros to the AMNA, ‟I don’t know if we are at the eleventh hour, or if it is already too late to save the mansion. It would be a great shame though not to do so”.

Now it remains for the Municipality of Mantoudi in Limni, Aghia Anna to speak for itself with its official webpage making the following announcement: ‟On Saturday, December 2, 2017 the contract was signed by our municipality for the purchase of the Tombazis heritage mansion, situated at Konaki, Kechries, with an area of 11.420 sq. m., an  elevated basement of 343,98 sq. m. and an elevated ground floor of 344,44 sq. m. The Green Fund paid €127,617.97 for its purchase. The property will be used for social and cultural purposes to benefit the local community”.