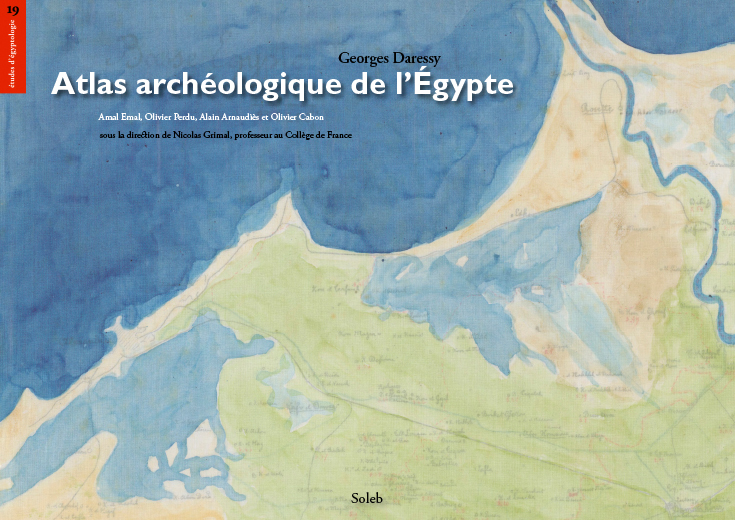 An interactive digital version of the iconic work of Georges Daressy is now available. Edited by Amal Helal, Olivier Perdu, Alain Arnaudiès and Olivier Cabon, under the direction of Nicolas Grimal, Professor at the College de France, L’Atlas archéologique de l’Égypte was published by editions soleb.

George Daressy arrived in Egypt in 1886. He served as a curator at the Boulaq Museum and then as Secretary General and Acting Director of the Department of Antiquities of Egypt. He worked on multiple heritage projects and excavations and he was present in many discoveries (including those of the palace of Amenhotep III and of the second royal cache Deir el-Bahari). Daressy was not only a tireless worker, but also a meticulous archive keeper: over the years he patiently noted all the archaeological discoveries of which he was aware of in his own Atlas. The “Atlas archéologique de l’Égypte” or “The Archaeological Atlas of Egypt”!

Up to now, the Atlas is treasured item of the department of Egyptology of the Collège de France since, apart from its archival and scholarly significance, it is a work of art. The digitized critical edition aims to showcase that, offering true digital reproductions of the original facsimiles, with additional bibliography, indexes and links to further sources.

114 facsimiles of large format and variable sizes reproducing the plates on which George Daressy had recorded several thousand pieces of geographical and archaeological data come alongside with an index in French/ English and Arabic (current names of cities and sites), and a supplement with 65 maps. The edition also includes detailed bibliography, directly linked with around 400 articles and publications.

As chief editor, Prof. Nicolas Grimal explains: “Our team released Georges Daressy’s Atlas in 2002 (note 1) as a collective work made with passion and due to passion, as our desire to give justice to the work of this great Egyptologist was that strong. He had brought, indeed, his deep knowledge of the field into the development of this book, which was one of the guidelines of his research work throughout his life. The project of this first edition was ambitious: to link a traditional publication with a digital format, both allowing a complementary and autonomous use, independent of any network connection. Today, the Atlas has reached its potential, and it seemed that the time had come to put the current technology at the service of the same interactive research concept, as it (technology) has gained a lot of efficiency and precision since the early twenty-first century.

Moreover, the experiences of our team in the “de-materialized” process of scientific information have encouraged us to do so. On the technical side, the support material (of the 2002 edition) is now almost in danger, having fallen victim to progress that makes it obsolete, one version after another. In addition, the current trend of research, highlighting the crucial importance of diffusion, now virtually free of physical limitations, aims to cope with the abundance of data, which is not possible with the traditional media of publication.

In less than ten years, the ‘Acrobat’ portable format has been established on all digital platforms, and since more than twenty years, this universality has been affirmed, guaranteeing a reasonable durability (across time). Its potential of including inter-linked data and the variety of uses it permits in documentation make it an indispensable tool.

What remained (to be dealt with) was the size of data: the three files that make up the present edition, a size which is already large, but it still remains reasonable for a computer or mobile digital devices (to process).

The approximately 400 books and articles provided, to which the bibliography refers, on the other hand, was too bulky for us to consider a recourse alternative to the internet. It’s also a sign of times and technological evolution: the almost universal accessibility of the net.

Finally, we chose to distribute this book for free, associating with a recommendation from the Ministry of Higher Education, Research and Innovation, in accordance to the perspective of a free and open scientific dissemination.”

NOTES
1. In reference to the Atlas’ first modern printed edition which is no longer available except for some online retailers.
2. Source: Soleb, press release (in French, via EEF)