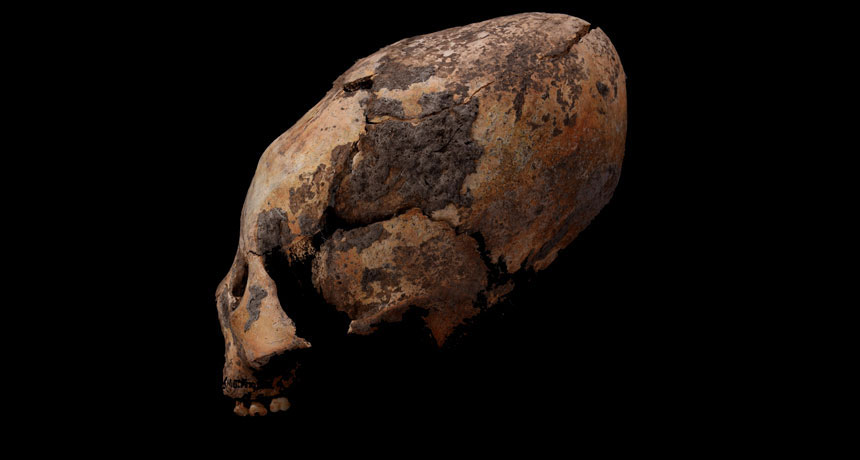 The oldest of this practice found so far

Human skulls found in China might have been intentionally reshaped according to a new study. The skulls were found in Houatomuga, a site in northeastern China at the Jilin province, and date to 12,000-5,000 years ago, probably the oldest and longest known case of reshaped human skulls.

Overall archaeologists found 25 skeletons, 11 of which had the skull artificially reshaped. The braincases were elongated and the bones at the front and back of the head flattened.

Reshaped skulls are not a rare finding, as it seems the practice has been used for social status or other reasons all over the world, from western Asia to southeastern Australia and the Americas. Usually this was achieved by compressing the head of infants or children either with one’s hands or by binding the head with cloth or boards.

The site was excavated in the period 2011-2015 and one of the modified skulls was 12,000 years old, as was shown by radiocarbon dating. Other skeletons with reshaped skulls seem to be dating to 6,300-5,000 years back, as is indicated by the sediment layers in which they were found. Four individuals with modified skulls were men and one was a woman, aged between 3 and 40 at the time of their death.

The pottery and artefacts found buried with the individuals whose skulls were reshaped indicate they came from a rich family, as was the case of a 3-year-old child.  Also, many shell ornaments were buried along with a woman whose skull had been elongated. Hence researchers believe the skull modification was a practice reserved for high status individuals buried at Houatomuga.

Overall, the continuity of the population in Houtaomuga Site demonstrated the earliest confirmed intentional cranial modification cases from the easternmost Old World, and the longest in situ duration of this practice at one single Neolithic site.

The report was published in the American Journal of Physical Anthropology.