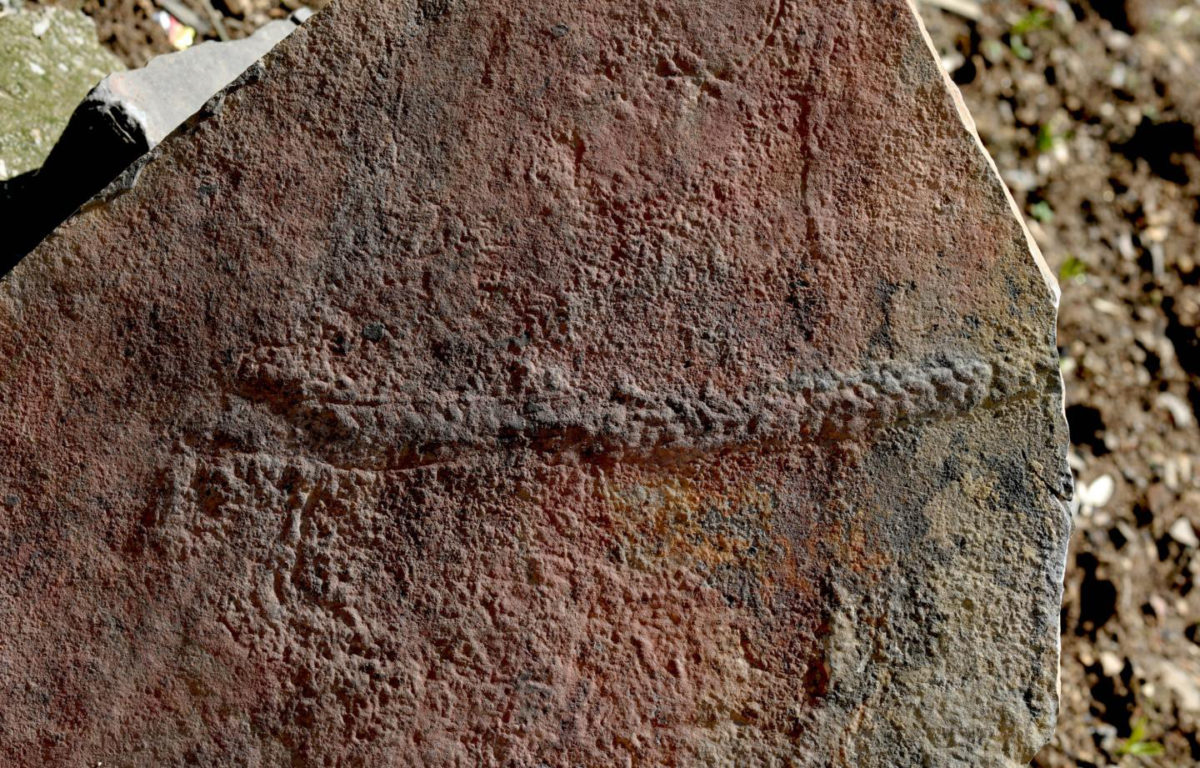 In a remarkable evolutionary discovery, a team of scientists co-led by a Virginia Tech geoscientist has discovered what could be among the first trails made by animals on the surface of the Earth roughly a half-billion years ago.

Shuhai Xiao, a professor of geosciences with the Virginia Tech College of Science, calls the unearthed fossils, including the bodies and trails left by an ancient animal species, the most convincing sign of ancient animal mobility, dating back about 550 million years. Named Yilingia spiciformis – that translates to spiky Yiling bug, Yiling being the Chinese city near the discovery site – the animal was found in multiple layers of rock by Xiao and Zhe Chen, Chuanming Zhou, and Xunlai Yuan from the Chinese Academy of Sciences’ Nanjing Institute of Geology and Palaeontology.

The findings are published in the latest issue of Nature. The trials are from the same rock unit and are roughly the same age as bug-like footprints found by Xiao and his team in a series of digs from 2013 to 2018 in the Yangtze Gorges area of southern China, and date back to the Ediacaran Period, well before the age of dinosaurs or even the Pangea supercontinent. What sets this find apart: The preserved fossil of the animal that made the trail versus the unknowable guesswork where the body has not been preserved.

“This discovery shows that segmented and mobile animals evolved by 550 million years ago,” Xiao said. “Mobility made it possible for animals to make an unmistakable footprint on Earth, both literally and metaphorically. Those are the kind of features you find in a group of animals called bilaterans. This group includes us humans and most animals. Animals and particularly humans are movers and shakers on Earth. Their ability to shape the face of the planet is ultimately tied to the origin of animal motility.”

The animal was a millipede-like creature a quarter-inch to an inch wide and up to 4 inches long that alternately dragged its body across the muddy ocean floor and rested along the way, leaving trails as loing as 23 inches. The animal was an elongated narrow creature, with 50 or so body segments, a left and right side, a back and belly, and a head and a tail.

The origin of bilaterally symmetric animals – known as bilaterians – with segmented bodies and directional mobility is a monumental event in early animal evolution, and is estimated to have occurred the Ediacaran Period, between 635 and 539 million years ago. But until this finding by Xiao and his team, there was no convincing fossil evidence to substantiate those estimates. One of the recovered specimens is particularly vital because the animal and the trail it produced just before its death are preserved together.

Remarkably, the find also marks what may be the first sign of decision making among animals – the trails suggest an effort to move toward or away from something, perhaps under the direction of a sophisticated central nerve system, Xiao said. The mobility of animals led to environmental and ecological impacts on the Earth surface system and ultimately led to the Cambrian substrate and agronomic revolutions, he said.

“We are the most impactful animal on Earth,” added Xiao, also an affiliated member of the Global Change Center at Virginia Tech. “We make a huge footprint, not only from locomotion, but in many other and more impactful activities related to our ability to move. When and how animal locomotion evolved defines an important geological and evolutionary context of anthropogenic impact on the surface of the Earth.”

Rachel Wood, a professor in the School of GeoSciences at University of Edinburgh in Scotland, who was not involved with the study, said, “This is a remarkable finding of highly significant fossils. We now have evidence that segmented animals were present and had gained an ability to move across the sea floor before the Cambrian, and more notably we can tie the actual trace-maker to the trace. Such preservation is unusual and provides considerable insight into a major step in the evolution of animals.”