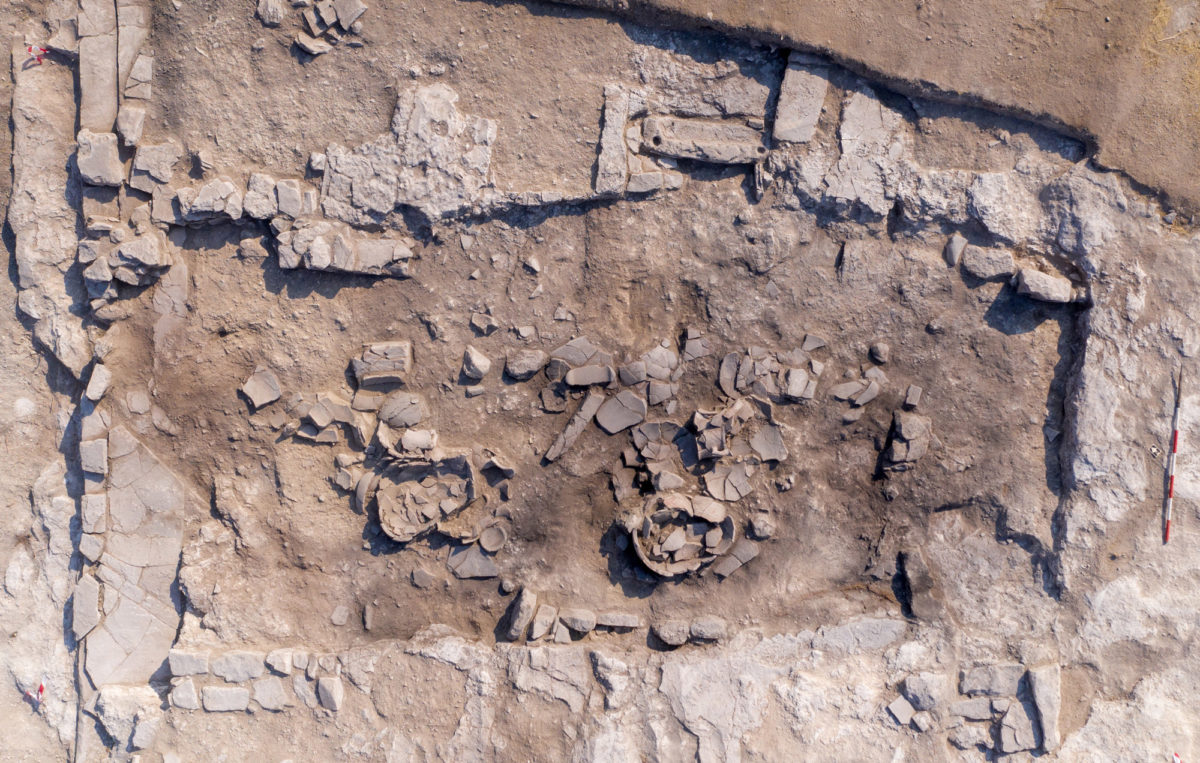 The Department of Antiquities, Ministry of Transport, Communications and Works has announced the completion of the 2019 excavation season conducted by the Italian Erimi Archaeological Project at Erimi-Laonin tou Porakou, where a team from the University of Torino, directed by Dr. Luca Bombardieri, successfully investigated an extended area of the Middle Bronze Age settlement.

The ancient site is located on a high plateau on the eastern Kouris river bank, covering an average area of 2 hectares. Seven relevant coeval contexts different in use and function have been cleared in 2019 both in the workshop complex and in the residential quarter.

The investigation of the workshop complex on the top of the hill revealed that this area, mainly intended for the production of dyed textiles, had a pivotal role and a peculiar ideological significance for the Prehistoric community of Erimi. By extending the investigated area towards the northern, western and southern wings of the complex, a series of three new rectangular roofed units (SA IX, SA XI, SA XII) were fully excavated.

The excavation in the southern wing revealed a large open working area, successively transformed into a roofed unit (SA XI, 7,40×7,70m.), a large rectangular unit was also fully investigated to the North of the complex (SA XII, 8,50×3,50m.). The location of this unit in the northernmost extension of the workshop, facing the valley cliff, is a strong indication of the coherent design of the complex, which now appears to have had a central courtyard enclosed by three series of parallel rooms to the North, West and South. The entrance to SA XII from the East is equipped with a stepped monolithic threshold; this unit served as a multi-functional space for storing and processing, as documented by the presence of pithoi and large vessels set in the floor, along with grinding and mortar-like installations.

The excavation in the residential quarter, located on the major lower terrace of the settlement, revealed a long-term use and transformation of the architectural layout, with a domestic unit in Area T2, in an area which has been successively transformed into a SW-NE connection alley, leading to the workshop complex at the top of the hill. Likewise, an intense building activity occurred in the South-western section of the residential quarter (Areas T3 and B2) during the most recent Phase A, where massive wall structures were built over a series of smaller domestic units belonging to the earliest occupation phase (Phase B). Most probably, all these building operations were coeval and part of a homogeneous new design of the inhabited spaces and internal communication routes in later Middle Bronze Age. This also involved the construction of the large circuit wall previously traced back in Area T1, which segregate the settlement and the extra-mural funerary clusters (Area E, southern cemetery).

A relevant exception to the standard burial customs at Middle Bronze Age Erimi was revealed by the excavation of unit 1 (4,40×3,90m.) in residential Area T3. Within the collapsed structures pertaining to the abandonment of this unit, the inhumation of a female individual was found. The body was set face down near a pre-existing stone basin set into the floor, where two single Red Polished hemispherical bowls were deposited as possible offerings. Preliminary analysis of the human remains confirmed that her age at death was between 15 and 20 years old. Interestingly, a few parallel cases of intra-mural anomalous female burials were documented in Early and Middle Bronze Age contexts in Cyprus, thus suggesting a possible differentiated mortuary treatment in specific contexts.

The fieldwork was carried out under permit and thanks to the scientific collaboration of the Department of Antiquities of Cyprus, in an on-going positive collaboration with the staff of the Archaeological Museum of the Lemesos District as well as of the Local Archaeological Kourion Museum, Episkopi.