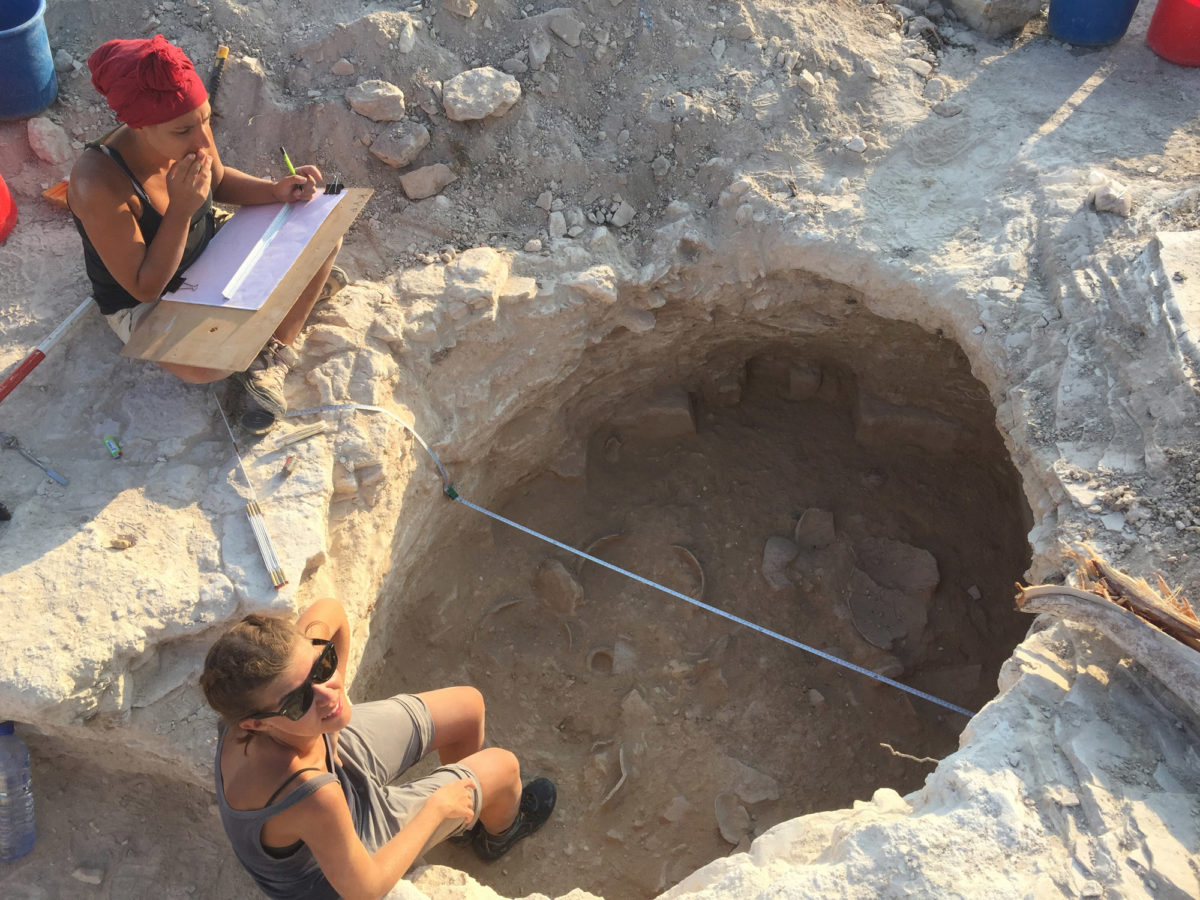 The Department of Antiquities, Ministry of Transport, Communications and Works announces the completion of the 2018 fieldwork season undertaken by the Italian Erimi Archaeological Project (University of Torino) at the site of Erimi–Laonin tou Porako, Cyprus. This year’s fieldwork was carried out from July 30th to August 23rd 2018, under the direction of Dr. Luca Bombardieri.

The ancient site is located on a high plateau on the eastern Kouris river bank, covering an average area of 2 hectares. While surface materials suggested that the area was scantily used during the late-Hellenistic and Roman periods, a major occupation is documented during the Middle Bronze Age to Late Bronze Age I (Phases A and B). During the 2018 fieldwork season four areas of different use were investigated: the workshop complex (Area A); the residential area (Area T2); the large circuit wall (Area T1) and the southern funerary cluster (Area E).

Investigations at the workshop complex on the top of the hill revealed that this area, mainly intended for the production of dyed textiles, played a pivotal role and had an unusual ideological significance for the prehistoric community of Erimi. By extending the investigated area towards the Western wing of the complex, a series of two new rectangular roofed units (SA X and SA V) were fully excavated. Unit SA X (2,50×3,00m.) is a small roofed annex directly connected with unit SA V. A huge deposit of dressed stones in the filling of the room suggests that it was deliberately closed when abandoned. Unit SA V (9,30×6,00m.) is a roofed space with an enigmatic function. A large limestone dressed monolith measuring 2,30m. was found collapsed in the centre of the room. The monolith, which is shaped as a regular slab is decorated on one side with carved motifs and was originally standing at the northern section of the unit. Additionally, a large Red Polished amphora and a circular fire place in limestone blocks were found facing the monolith in the opposite southern area, while a series of 11 shallow rounded basins were set along the sides and at the centre of the unit. The peculiarities of context suggest that this unit may have had a ritual function. Further analyses and future investigations will provide us with stronger evidence in support of the hypothesis of unit SAV acting as a small shrine, presumably connected with production activities and their ideological implications.

Excavations in the residential quarter, located in the major lower terrace of the settlement, revealed a large rectangular domestic unit in Area T2 (Unit 4; 5,00×3,00m.). The access to the unit is marked by a large stone threshold and steps that directly connect this domestic unit with nearby Unit 1, excavated in 2017 and with a SW-NE connection alley, leading to the top of the hill.

Excavations in the area of the settlement’s large wall (Area T1) confirmed the importance of this massive wall structure, that appears to delineate the settlement to the West and South, following the natural edge of the terrace. The wall’s current extent is 80m and it is 1,60/1,70m. wide. A cut (0,60-0,70 m. deep) had been made in the bedrock in order to form the foundation of the structure. The cut was filled with rubble and large stone blocks with plaster mortar. Such a foundation would be able to support a dry-stone masonry wall up to 2,00m. in elevation. This impressive wall structure appears to have been a kind of circuit wall surrounding the settlement and can be ascribed to the most recent phase of occupation of the settlement (Phase A), during the end of Middle Bronze Age.

The southern cemetery area (Area E) covers a series of terraces sloping towards the South-East of the settlement, just outside the large circuit wall, mentioned above. Two interesting tombs were excavated during this season, along with three additional funerary rectangular pits, of a special interest regarding funerary architecture and mortuary treatment. While Tomb 466 is a large pit tomb (1,80×1,95m.), Tomb 467 (1,85×2,50m.) is of an unusual type, a so-called pit-chamber tomb, already attested at prehistoric Erimi. A large assemblage of Red Polished and Drab Polished, imported and locally produced ceramic vessels formed a rich funerary assemblage excavated on the deposition floor of Tomb 467 (Fig. 1), along with a unique elongated oval-shaped stone, measuring 0,55m. and extensively decorated with red painting.