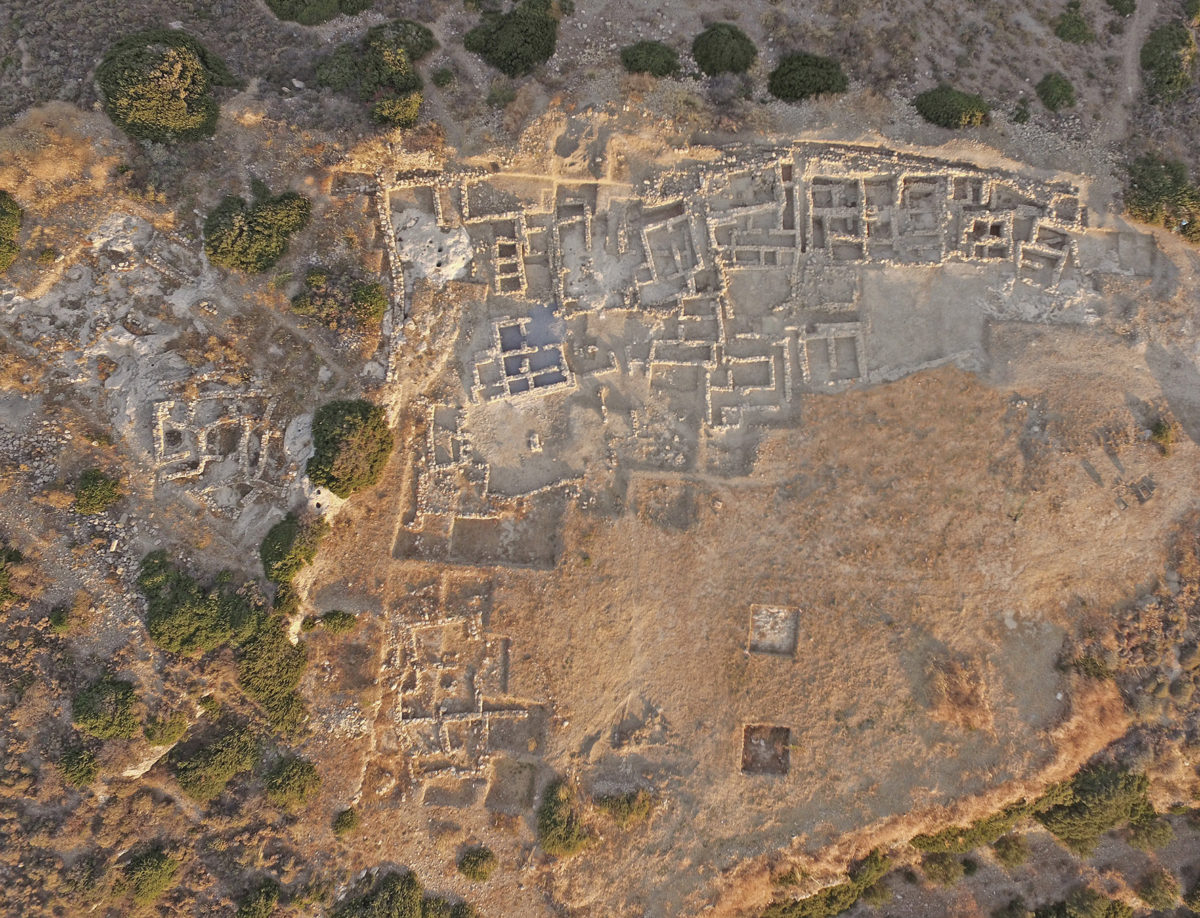 The Petras cemetery has been uncovered

The finds of this year’s excavation

Systematic excavations have continued for the 16th year at Petras in Siteia, the main gateway to Eastern Crete for exotic products and raw materials (copper, silver, gold, semiprecious stones, ivory, etc.) both from the Eastern Mediterranean and the rest of the Aegean. Excavations were conducted at the intact Pre and Proto Palatial cemetery which is part of a unique monumental complex (palace-urban settlement-cemetery). The activities that had developed in Petras resulted in its great flowering, which culminated in the founding of its palace.

The cemetery of Petras being excavated in the 21st century by modern methods and the largest in Crete of its time, offers a unique opportunity to understand the socio-economic and administrative evolutionary processes, which not only led to the creation of the first palaces, but also defined the particular character of the Proto-Palatial period.

Due to its long use, Petras cemetery includes successive burial buildings (50-150 m2 with two to fourteen rooms) or a combination of buildings and burial pits, with backfilling in many cases exceeding 2.50 m. Some of the newer constructions have reused the walls of earlier ones, while others have a different orientation. In recent years, along with the completion of excavations of the Proto palatial burial buildings, earlier layers have been excavated with impressive findings. Specifically, there are 23 burial buildings, so far dating from the EM IB to the MM IIB (ca. 3000 / 2900-1800 BC), and there are others that have not yet been counted, as their floor plan is not complete. Nine burial pits and tombs of other types have also been excavated. Burials are mainly secondary with some exceptions of primary ones. The cemetery also has enclosures to the east and west, as well as passageways between the burial buildings, and two extensive spaces to the east for ritual uses.

The buildings of the LM III A-C (1400-1200 BC) on the west end of the cemetery are of particular interest, being related to the worship of, already ancient, ancestors, and partly built with carved stones brought from the Petras palace. These buildings include a monumental three part entrance, a strong retaining wall, a square platform, a rectangular building in the style of a palace, an outdoor space like a place of worship, areas for food preparation and storage, waste pits, and several more fortified  walls whose use has yet to be identified with certainty.

Because of all of the above, the stratigraphic sequence is particularly complex and understanding the sub-phases is also difficult.

During this season, excavation proceeded of the Proto-Palatial Burial Building 9 which has eight rooms and an open space to the west. Apart from the rich osteological elements including a primary burial, the most important finding was an Egyptian imported scarab-shaped signet ring, a valuable find regarding both the relations between Minoan Crete and Egypt and the accurate dating of the Proto-Palatial period. It was also found that in addition to the large Ceremonial Hall 2, Burial Building 9 also provided a special open space to the west, where food and drink were consumed probably for reasons of ritual. This part of the building yielded decorated serving and drinking vessels, a bronze knife, many animal bones and an entire bull’s head excellently preserved. Excavation of the MM 1A burial building began on a deeper level beneath Burial Building 9, which resulted in rich secondary burial deposits containing beads and amulets, semiprecious stones, bronze cosmetic implements and some figurines.

Excavations of the Pre Palatial Burial Buildings 26 and 27 were also completed. These yielded two excellently crafted and preserved seals, an ivory ring with spirals and a trihedral prism bearing a Cretan hieroglyphic inscription.

The 2019 excavation has also shown that in the Petras cemetery where the MM IA phase is subdivided into at least two sub-periods, the study of the considerable amount of pottery will hopefully help in understanding the last Pre-Palatial phase in Eastern Crete. Τhree more seals of ivory and hard stone belonged to this phase , as well as gold amulets and stones, beads, several stone vessels and very interesting decorated pottery in a great variety of shapes.

This season’s excavation took place from 1 July to 9 August, under the Honorary Director of the Ministry of Culture, Dr Metaxia Tsipopoulou. The research and excavation were interdisciplinary, and scientists from Greece, Europe, the USA and Canada were involved in both. The excavation, documentation and study of skeletal remains were done by a team from the University of Thessaloniki, headed by Prof. S. Triantafyllou. The project’s funding came entirely from the US Institute of Aegean Prehistory/INSTAP.