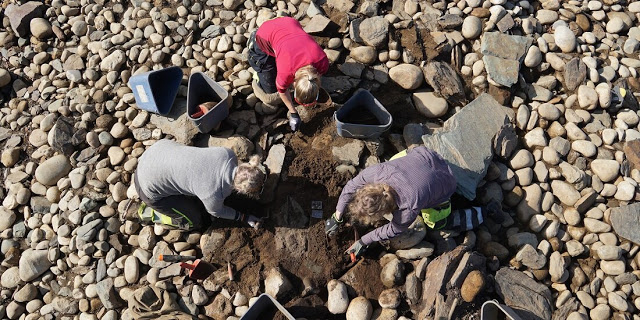 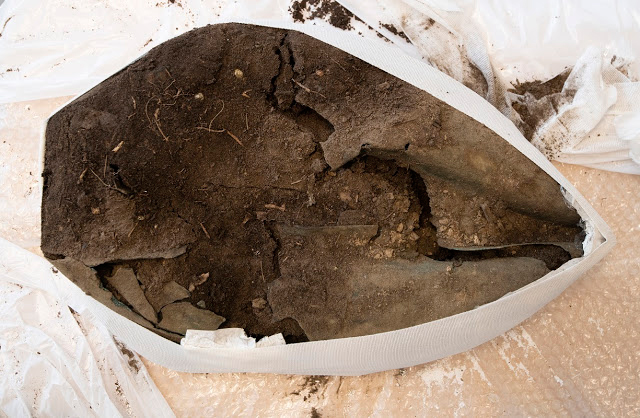 In Gylland in the Gaula River valley

Sometime around 150-300 CE a person died at the place now called Gylland in the Gaula River valley, in southern Trondelag county. After the body was cremated, the remains were laid in a bronze vessel. This was then covered or wrapped in birch bark before being buried under several hundred kilos of stone.

And there it stayed—until this summer, when archaeologists from the NTNU University Museum lifted a stone slab and almost lost their breath from excitement when they saw what lay below it.

“We’d gone over the spot with the metal detector, and so we knew that there was something under one of the stone slabs in the burial cairn,” says archaeologist Ellen Grav Ellingsen, who filmed the discovery with her mobile phone when the rock was lifted away.

“When I saw what was lying there, my hands got so shaky that I could hardly film. This is a find an archaeologist is lucky to experience once in their career!” says Ellingsen.

The gravesite in Gylland is one of two that the NTNU University Museum’s archaeologists are investigating on behalf of Nye Veier in connection with the construction of the new E6 highway south of Trondheim.

The cauldron from Gylland belongs to a type of bronze vessel that goes by the name Ostlandskjele, which means “eastern boiler.” The name is related to the fact that many vessels of this type are found in graves in Eastern Norway.

This kind of vessel was manufactured in Italy or in the Roman provinces of the Rhine region, and came to Scandinavia as a result of either trade or an exchange of gifts. The vessels were mass produced and possibly intended for export to the Scandinavian area. In Scandinavia they often ended up as burial urns. Although they were mass produced, this bowl is a rare find.

“The last find of a bronze bowl in central Norway was in the 1960s. Nationally, we know of about 50 vessels of this particular type,” says Moe Henriksen, an archaeologist and the project manager for the excavation in Gylland.

Imported goods like bronze vessels and glass jugs were reserved for society’s upper classes. The discovery in Gylland testifies to the power and prosperity in this region in Roman times.

“This wealth was probably linked to the passage of traffic and Gylland’s proximity to important land resources like bog iron, which was the basis for the extensive iron production in Trondelag in Roman times,” says Moe Henriksen.

The bowl was in pretty bad shape when it was found. It’s likely that the pressure from the stones compressed it. It was already well used when it was placed in the grave, and traces of repairs are visible in several places.

“The bowl is now being examined more closely in NTNU’s conservation laboratory. An X-ray of the vessel shows that it doesn’t contain any metal objects,” says Moe Henriksen.

“But the remains of organic material, like combs and bone needles, may still be hidden in the soil inside the bowl. In the next few weeks we should know whether other objects accompanied the deceased into the grave,” she adds.

The burial cairns in Gylland are large, and recent dating shows that they were used as burial sites for hundreds of years. Although the bones contained in this bowl are dated to younger Roman times—about 150-300 CE—discoveries have been made at deeper levels that are considerably older, dating to 490-360 BCE.

“We haven’t yet reached the bottom of the burial site, so it may be that we’ll make new discoveries that are even older. That would be very interesting, because we know so little about burial customs that far back in time,” says Moe Henriksen.