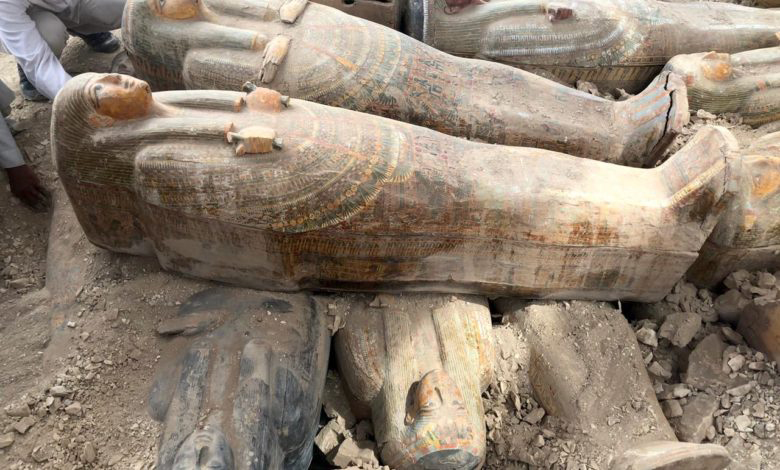 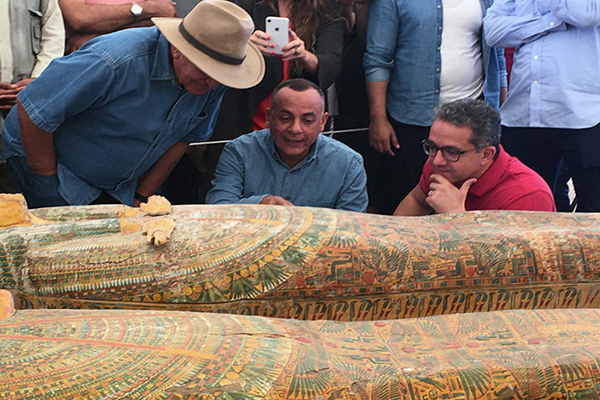 Latest discovery on the West Bank of Luxor

He said that the discovery was made by an Egyptian mission led by Dr. Mostafa Waziri Secretary General of the Supreme Council of Antiquities. He added that it is the first cachette of coffins to be uncovered in Luxor since the end of the 19th century, describing it as exceptional; he is very proud since, after more than a century, Egyptian archaeologists succeeded to unearth a new cachette in Luxor.

Among the well known cachettes in the Theban Necropolis, opposite Luxor, are: the royal mummies cachettes, one
at El-Deir El-Bahari (found in 1881) and another in king Amenhotep II’ s tomb (found in 1898) as well as a cachette of priests found at Bab Al Gassus, on Luxor’ s West Bank, in 1891.

El-Enany pointed out that the newly uncovered coffins were found grouped in the cachette on two levels, on top of each other. The first level houses 18 coffins while the second contains 12 coffins.

During the conference El-Enany along with renowned Egyptologist Dr. Zahi Hawass and Waziri witnessed restorers opening two coffins and revealing two very well preserved mummies of a man and a woman wrapped in linen.

The coffins will be subjected to restoration in order to be transported to the Grand Egyptian Museum to be on display in a special hall.

El-Enany pointed out that he is proud of the work of the archaeologists in Luxor, as this is the first cachette to be discovered by Egyptian archaeologists. Dr. Waziri describes the discovery as the biggest to happen along the last few years. Some of the coffins are fully painted with scenes from the Book of the Dead and the titles of the deceased; others are partly painted and a third group are plain. Among the uncovered coffins, 23 belong to men, 5 to women and three to children.

Dr. Waziri said that further research will take place on the coffins and the mummies inside, in order to reveal more “secrets” of the cachette. He explains that the coffins were grouped and hidden in the cachette by an ancient Egyptian priest during the end of the the 22nd dynasty to protect the bodies of his ancestors during an era of unrest which was well-known for tombs raiders.

During the 10th century BC, almost 3.000 years ago, tombs robbers were widespread in the country and, aiming to steal the funerary collections found in tombs, they were destroying the coffins and the mummies while entering.