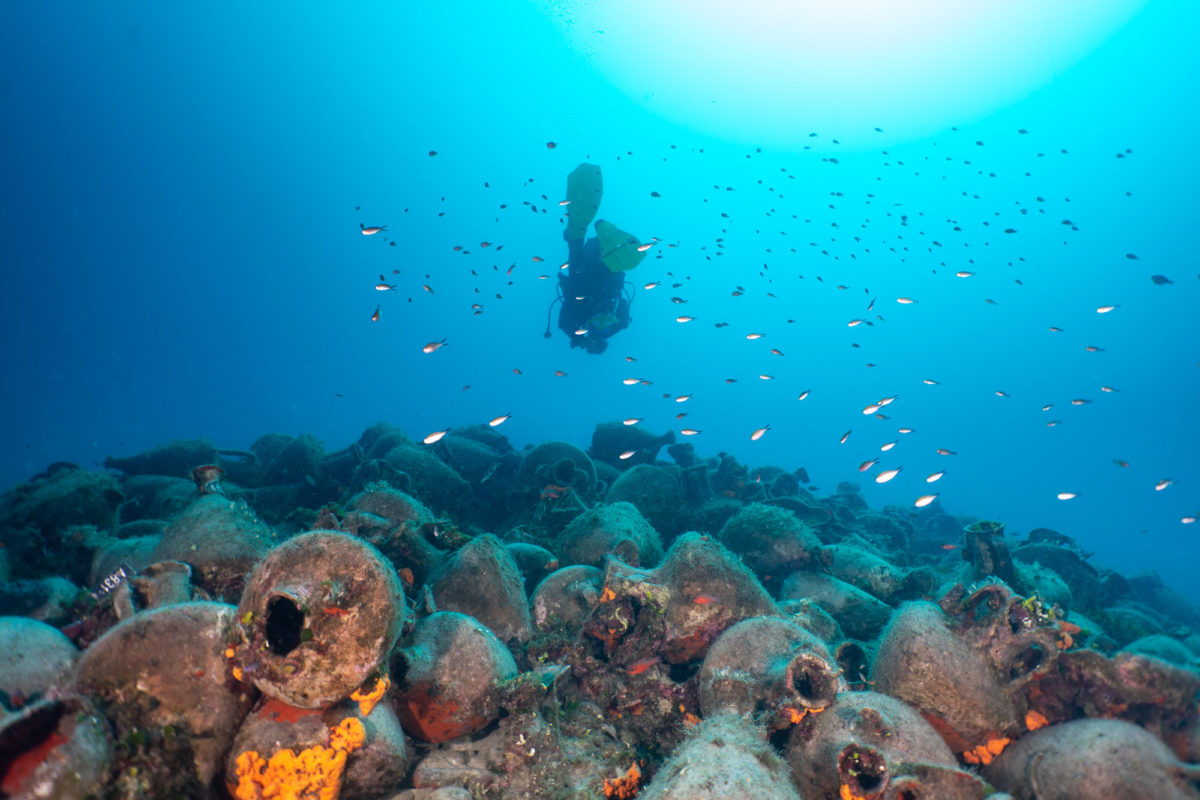 A sea strewn with shipwrecks

Where the first underwater museums will open in Greece

If one had to imagine a sea strewn with shipwrecks, one would not have to go very far. “One has only to consider that in the region of Fournoi alone we have located 58 such shipwrecks” says head of the Ephorate of Underwater Antiquities Pari Kalamara to the Athens and Macedonia News Agency. But how many of these can be visited?

The last big bet made by the service she runs is precisely in regards to this matter of accessibility. Creating the so called “underwater museums” where visitors will be able to scuba dive to enjoy one of the most mysterious chapters of history may soon become a reality. How did these ships go down and under what circumstances? Were they war or trading ships? What do the findings have to say about their identity?

The first museum that will open as a pilot scheme next summer is that of Peristera in the North Sporades and the three in the Pagasetic Gulf. However, for one to arrive at such a finished shipwreck as to be considered an archaeological wonder or ,even with a degree of exaggeration, as the ‟Parthenon of the deep”, one has to go back to 2005 when recreational scuba diving was first made legitimate. ‟It is then that the concept is mentioned of archaeological diving parks and the possibility of creating underwater museums” says Pari Kalamara to the AMNA. ‟Till that moment recreational scuba diving was forbidden”, she adds.

Since becoming Head of the Ephorate of Underwater Antiquities in February 2018, she herself only recently began her first scuba diving. ‟When we talk of underwater sites open to visitors, we are talking about average depths, i.e. up to thirty metres”, she points out. This was not the only term however. The law stipulated that no private diving could take place without the presence of an archaeologist or antiquities keeper.

After 2005 at least another eight years had to pass to determine which underwater sites can be visited. These sites were determined since 2012 until 2015, while this year, four more shipwrecks were rated as accessible.

‟We have a group of eight shipwrecks in the Pagasetic Gulf and the Alonnisos region, a second group of seven shipwrecks between Lavrion and Makronisos and a third in Methoni Messinia, where one of them is the historically charged site of the Naval Battle of Navarino. These three regions can be made accessible to visitors”, said Ms Kalamara to the AMNA.

A visit however is not that simple. There is still a lot to be done; from the bollards for mooring visitors’ crafts, to the staff required to accompany them. In the meantime, one can let his/her imagination run free when looking at the digital map where the archaeologist scuba divers have placed the shipwreck sites: the Telegraphos, Glaros and Kikynthos in the Pagasetic Gulf. The Peristera, Tselios, Aghios Petros, Faggrou and Skantzoura in the Northern Sporades.

In all these cases, the sunken ships borrowed their names from the geographic locations. But to what era do all these shipwrecks belong? ‟To all eras”, replies Ms Kalamara. ‟We have shipwrecks even from Prehistoric times and of course from the Classical, Late Roman, Byzantine and also far more recent”.

The safest guide for placing a ship in its correct period is its cargo. The Peristera shipwreck is a true archaeological wonder precisely because it has a rare collection of amphorae that, according to Pari Kalamara, transported wine, oil or preserved goods. The same evidence is also given by the route taken by the ship before it ended up on the seabed.

Ms Kalamara also tells the AMNA that every sunken ship or aircraft becomes a monument after 50 years on the seabed, so warships from the two world wars are considered monuments, as are commercial or passenger ships that became a watery grave for those travelling on them.

Many of these ships are submerged at much greater depths that are prohibitive for any diver. For those again that have been designated as suitable for visiting, some underwater coordination will be necessary, starting from the underwater route and including the safety of visitors. Once underwater, one finds an archaeological treasure of amphorae, jars, pots, columns, sarcophagi and other objects, among which a special place is held by anchors. One of the most well known shipwrecks lies in Cretan waters. ‟La Therese” has been resting there since the 17th century. ‟Canons are the basic evidence of warships belonging to that time”, Pari Kalamara tells the AMNA.

If one had to accurately describe the Ephorate of Underwater Antiquities, one would say it is a service of archaeologist scuba divers. George Koutsouflakis is one of the most experienced. He has been a diver since he was 16 and was drawn to the science of Archaeology precisely via the underwater world. ‟My first contact with shipwrecks was a revelation”, he says to the AMNA. ‟A shipwreck is many things. It is a place of tragedy but also a place of memory. It is in a spot that is not friendly to human beings; if not even hostile at times. You have the sense of adventure, History and the rare opportunity of looking at something rarely seen”, he adds.

Nevertheless, it was the dream of a life time to be able to visit underwater museums even as a scuba diver archaeologist himself who has dived almost all over Greece. ‟The wealth is incredible and to think that we have mapped only 5% of it”, he says. But can there be an even greater number of well preserved shipwrecks such as that of Peristera, where the arrangement of the thousands of amphorae goes as far as revealing even that the ship was 25 metres long? ‟No doubt about it” he replies. ‟But they are most probably at much greater depths”.

Meanwhile, the Peristera underwater museum is preparing to open in a few months. Till then you can visit the information centre at Alonnisos. There, you are given a pair of spectacles that take you down into the magic world of shipwrecks by a 3D representation application. This virtual diving is the first taste of a reality that soon will come about.