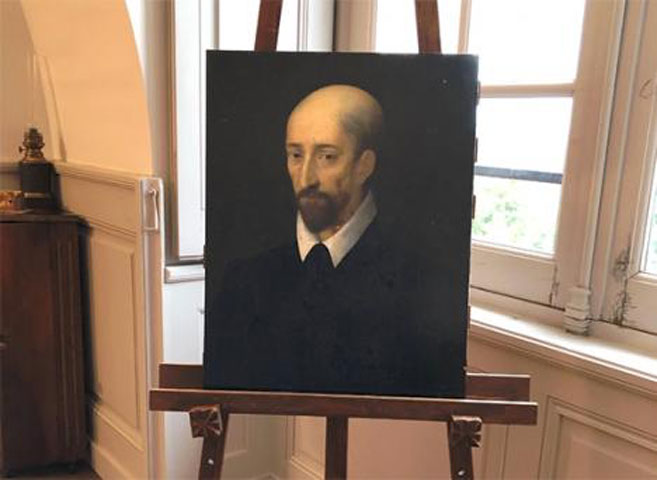 The mysterious painting will be examined by experts

A portrait of Machiavelli? By the hand of Leonardo Da Vinci? An unsigned painting forgotten for many years in a French chateau depicting a man who resembles the Italian philosopher Machiavelli will be examined by experts to be authenticated.

The painting was found in the spring in the storerooms of the Chateau de Valencay in central France. The painting on wood measuring 55×42 cm portrays an unknown bald, bearded man with an inscrutable look, of indeterminate age and dressed in black.

According to the chateau archives, it is a portrait of the Italian Machiavelli, Renaissance philosopher, painted by his compatriot Leonardo Da Vinci.

‟I asked the porter to pack a crate containing a painting (Machiavelli by Leonardo Da Vinci) and put it on a train” says a note written by the chateau’s manager in 1874.

‟Just because it says so in the archives does not mean it’s true”, pointed out Anne Gerardot head of the local archives office, who over the last year has been conducting a lot of research on this matter.

The chateau’s director Sylvie Giroux notes that the chateau belonged to the prince Talleyrand ‟who was an avid collector of art works and had important collections”. Attributing the work to Leonardo Da Vinci is not ‟impossible”, according to Giroux who announced that a series of tests will shortly be conducted to determine its authenticity.

In an article in ‟Cahiers de Valençay” published in May, Anne Gerardot writes that if the manager’s note speaks the truth, then that proves a meeting really took place between Machiavelli and Da Vinci. She herself explains, however, that attributing the work to Leonardo Da Vinci is perhaps ‟the fruit of a gradual transformation of a hypothesis into a confirmation”.

Moreover, according to Gerardot, the face depicted resembles ‟the well known representations of Montaigne rather than those of Machiavelli”. In addition, the wooden board on which it was painted seems to be in too good a condition to date back to the 15th or early 16th century. However, restoration work on the painting in Berlin during the 1890s may also have ‟distorted it and changed its original appearance” she points out.