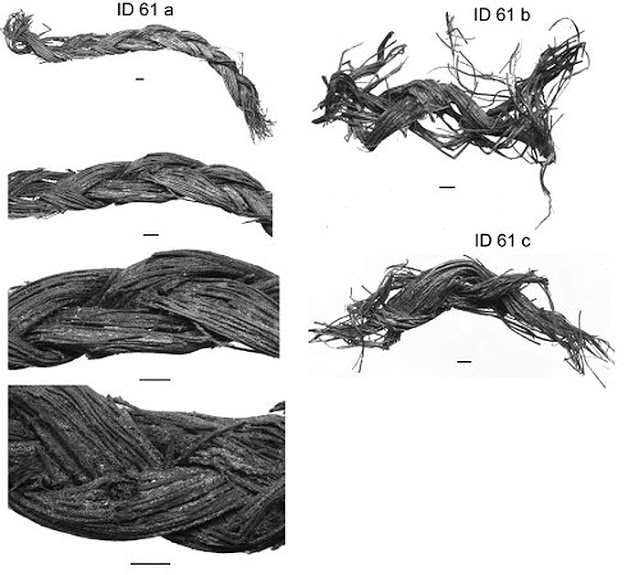 Research shows people made ropes and baskets during the Paleolithic era

A research team from the University of Valencia and the CSIC has published a study that demonstrates the use of plant fibres during the Final Palaeolithic era in the Santa Maira caves (Castell de Castells, Alicante).

These are fragments of braided rope and basketwork imprints on clay. The rope has provided the oldest direct dating in Europe for an object made of braided fibres: 12,700 years ago. In the same work, the first evidence on the use of containers made from clay-coated baskets has also been revealed.

The work analyses both the species used to obtain braided ropes, their treatment and preparation, as well as their use to manufacture more complex devices such as baskets and containers. These materials have been dated back about 13,000 years. Ethnological data indicate that these materials have been widely used among historical societies, but we are largely unaware of their use in Prehistory.

“It is an important contribution to the knowledge of the use of perishable materials among the hunter-gatherer-fishermen societies of the European Palaeolithic” according to J. Emili Aura, Professor of the Department of Prehistory, Archaeology and Ancient History of the University of Valencia.

The conservation of vegetable fibres of this age requires particular preservation conditions. Also that of clay fragments with baskets imprints, whose exposure to fire has allowed their conservation. These are containers whose age exceeds 5,000 years of the first Neolithic ceramics of the western Mediterranean. The study has been published in the academic journal Vegetation History and Archaeobotany.

The analysis of the vegetal fibres has allowed to identify the remains as belonging to a monocotyledonus, probably from the group of grasses and very similar to esparto. Its leaves were braided to make ropes with which a large number of artefacts could be made and with several uses.

The director of the excavation project, J. Emili Aura, points out that the Santa Maira data allow us to begin to correct a great bias. To think that only the materials that are best preserved, such as stone, bone or shell, were the most used is a mistake. These evidences show that other materials and techniques must have a wide use and diverse applications: baskets, backpacks or footwear.

This bias also affects the importance attributed to these techniques during the Palaeolithic. “The same goes for the character of this braiding rope activity and its possible authors. It is known that in historical societies it was a seasonal task developed largely by women.”

The materials analysed indicate the manufacture of various basketry objects using ropes, without ruling out the possible elaboration of fabrics. The fragments of mud with imprints allow us to propose the hypothesis that these are baskets that were covered with mud, which could be used for the preservation of liquids or for cooking. Its discovery opens a good number of questions. Ropes and containers are related to the rest of the techniques and materials found in the site, with the palaeoeconomics of these groups and their settlement systems.