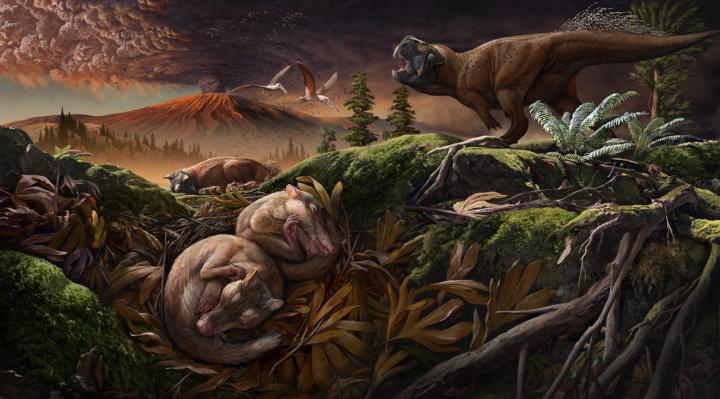 A joint research team led by MAO Fangyuan from the Institute of Vertebrate Paleontology and Paleoanthropology (IVPP) of the Chinese Academy of Sciences and MENG Jin from the American Museum of Natural History reported a new symmetrodont, Origolestes lii, a stem therian mammal from the Early Cretaceous Jehol Biota, in China’s Liaoning Province.

A key feature of Origolestes is that the bone link between the auditory bones and Meckel’s cartilage has disappeared, showing the separation of the hearing and chewing modules in therian mammalian evolution. Their findings were published in Science on Dec. 5.

The new species was established based on multiple 3D skeletal specimens. The researchers reconstructed 3D skeletal morphologies of the animal using high-resolution microtomography (micro CT). The buried forms of the specimens show that these animals died at rest. As a result, the skeletons were basically undisturbed during fossilization, thus allowing the detailed structures to be preserved.

Skull morphologies, dentitions, jaws, and tooth wear from individuals of the same species show evidence of opening and closing movements during the biting and chewing process as well as jaw yawing and rolling.

“The multidirectional movements of the mandibular during chewing are likely to be one of the selection pressures that caused the detachment of the auditory ossicles from the dental bone and the Meckel’s cartilage,” said MAO.

From the perspective of morphology and function, the decoupled hearing and chewing modules eliminated physical constraints that interfered with each other and possibly increased the capacity of the two modules to evolve.

Therefore, the hearing module may have had greater potential to develop sensitive hearing of high frequency sounds, and the chewing module may have been able to evolve diverse tooth morphologies and occlusal patterns that facilitated consuming different foods.

Thanks to the high-resolution micro-CT scan, the researchers were able to image the 3D ossicular morphologies of Origolestese. These morphologies are probably the most complete among known Mesozoic mammals and provide rich and unequivocal fossil evidence for future study of the mammalian middle ear evolution.

A special feature of Origolestes is that its middle ear also retained the surangular bone, in addition to the stapes, malleus, incus, and ectotympanic, which all mammals have. It is notably absent in other mammals.

This feature poses a challenging problem for the study of paleomammals and modern developmental biology: Was this ossicular bone completely lost during mammalian evolution or does it persist in extant mammals in a way that people don’t notice? More discoveries of relevant fossils and more detailed studies of developmental biology may eventually answer this question.