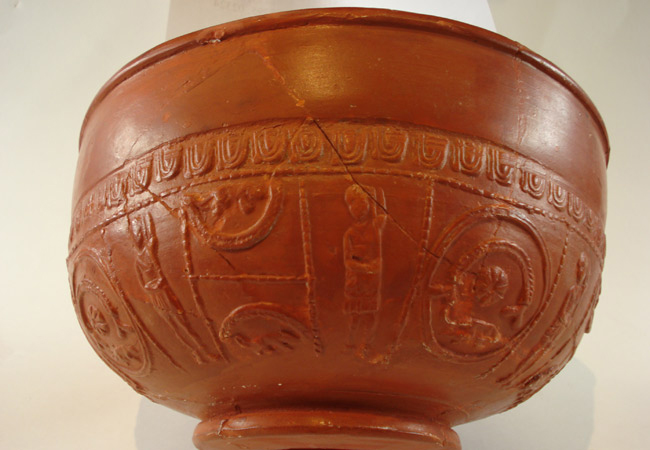 Virtual journey to the Romans

In an extensive project, archaeologists at Goethe University processed and digitally recorded Roman artefacts from Stockstadt am Main (Bavaria).

The work lays the groundwork for future research and a new conceptualizing of the museum in Stockstadt.

Where Stockstadt am Main is located today, one of the most important locations of the Roman Main-Limes existed from about 100 to 270 AD. The fort accommodated numerous Roman support troops in succession, the longest being the cohors I Aquitanorum veterana equitata, a unit of approximately 500 foot soldiers and 120 horsemen, who were originally recruited in today’s south western France. The military camp was connected to a sprawling settlement (vicus) which profited from the garrison and also from trade with Germania.

The Roman Stockstadt is above all internationally known for its Mithras temple (mithraeum), the stone altar of the Beneficiarii (beneficiarii consulares), a kind of military police and customs office for the Roman governor, two bronze faces from paradehelmets of horsemen, and a hoard of coins consisting of 1315 silver coins (denarii). Today, these artefacts are stored and displayed in the Saalburg Museum, the Archaeological Collection of the Bavarian State in Munich, and in the Stiftsmuseum Aschaffenburg.

Extensive excavations were only carried out between 1885 and 1909, and some smaller ones after 1990. Most recently, excavations in the Roman graveyard were conducted in 2011/2012. Since 2005, the Roman site has been a part of the UNESCO World Heritage Site Upper German-Raetian Limes (Obergermanisch-rätischer Limes).

The museums mentioned above are not the only museums storing finds from Stockstadt; the Heimatmuseum Stockstadt possess a collection of more than 6000 objects of Roman artefacts, including diverse objects from daily life and military equipment, but also architectural components from the fort’s fortification and well-preserved burial objects from numerous graves. These finds originate mostly from rescue operations and chance finds at construction sites from the 20th century by volunteers and private citizens, as well as from official excavations. The finds, some of whose are of international significance, are largely unpublished and only exemplarily displayed.

The systematic archiving and indexing of these inventories for science and the interested public was the goal of a Bavarian-Hessian cooperative project involving the city Stockstadt a.M., Goethe University Frankfurt, and the Landesstelle für die nichtstaatlichen Museen in Bayern (State Office for Non-governmental Museums in Bavaria), which was concluded after nine months at the end of 2019. The artefacts are now digitally recorded and researchable according to current standards for cultural assets in a media database of the Landesstelle für die nichtstaatlichen Museen in Bayern. Beginning in 2020, the database will be accessible online through the Stockstadt homepage. To achieve this goal, the artefacts had to be cleaned, sorted according to collection or find site and material, scientifically identified (at least roughly), and dated. In addition, the objects were photographed individually or in groups. This collection and securing of data laid the groundwork for the archiving that accompanied entry of the data into the media database. Each object was labelled with an inventory number.

All of this work was carried out by a small team of students with the support of volunteers. The students thus had the opportunity to gain material knowledge in their area of study and at the same time obtain insight into practical museum work in the digital age. Dr Alexander Reis from Obernburg am Main, who works as scientific assistant at the Institute for Archaeological Sciences (Dept. II) headed the project; his employment was made possible by third-party funding from the city of Stockstadt for this project. He is a specialist in provincial Roman archaeology and received his doctorate at the Goethe University in the Archaeology and History of the Roman Provinces with the thesis “NIDA – Heddernheim in the 3rd Century AD – studies on the end of the settlement” (Manuscripts of the Archaeological Museum Frankfurt 24, Frankfurt a.M. 2010) under Professor Hans-Markus v. Kaenel.

The project has not only yielded an appreciable added value for archaeological Limes research, it also forms the basis for a future reconceptualization of the museum’s permanent exhibit. In the course of the project, it was also possible to transfer the extensive private collection of the local pharmacist Dr Fred Rattinger (1912-1981) to public ownership.