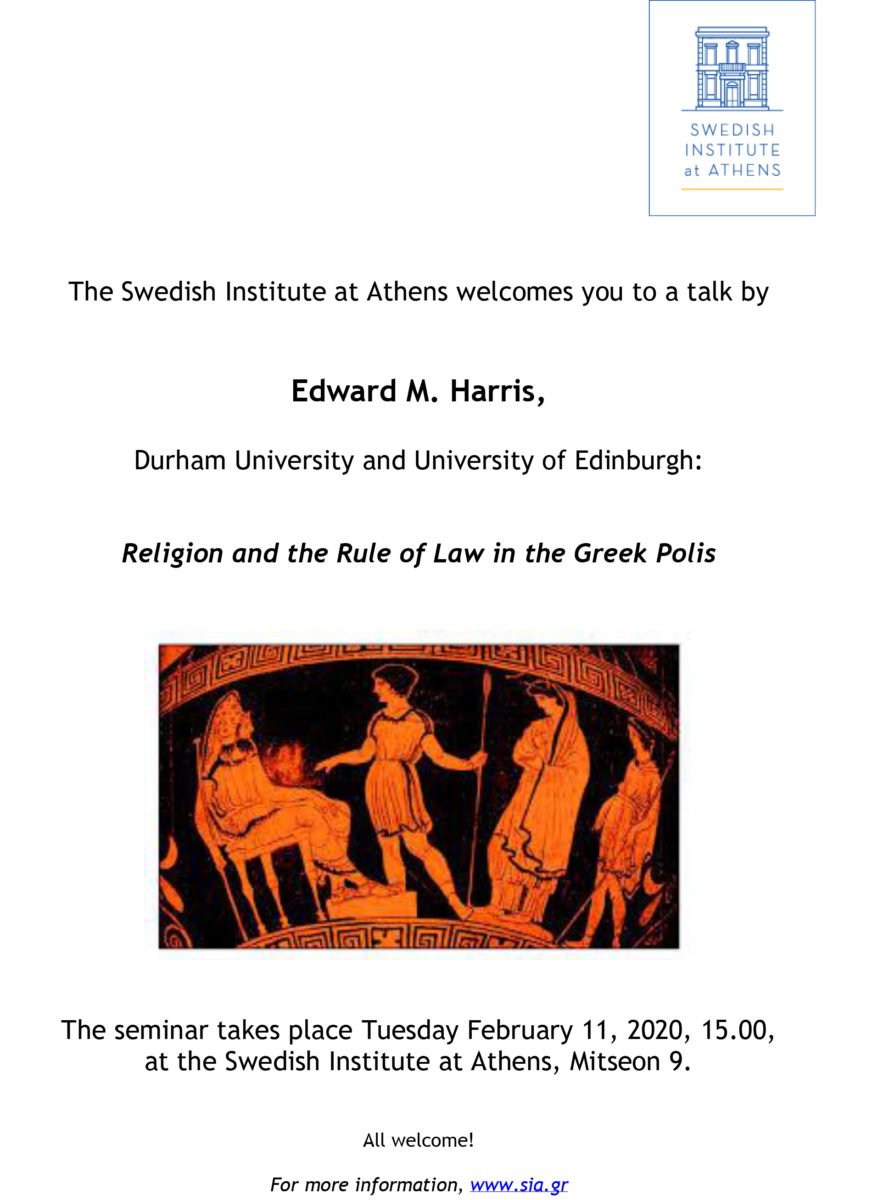 Religion and the Rule of Law in the Greek Polis

The Swedish Institute at Athens welcomes all to a talk by Edward M. Harris,
Durham University and University of Edinburgh, on “Religion and the Rule of Law in the Greek Polis”. The seminar will take place on  Tuesday, February 11, 2020, at 15.00, at the Swedish Institute at Athens, Mitseon 9. It is part of the Athens Greek Religion Seminar series.

This paper discusses the rule of law and religion, two areas that are usually not discussed together. The main reason for this lack of discussion is that most scholars believe that the rule of law belongs to one realm, the secular and rational part of Greek society, and religion to the non-rational or what E. R. Dodds called the Irrational part of Greek society which was based not on reason but on emotional drives and what writers in the Enlightenment would call “superstitions.” This paper shows that this is to a large extent a false dichotomy. The Greeks saw no clash between the two, which they thought peacefully co-existed. There were obviously tensions and perhaps even contradictions within Greek values, but this is not one area where there was any serious conflict. The first section will discuss what the
Greeks understood by the concept of the rule of law: 1) equality before the law, 2) accountability of officials, 3) fairness in procedure (impartial judges, right to present evidence and respond to charges), 4) no ex post facto laws, and 5) no punishment without law. The second section will briefly examine Sophocles’ Antigone to show that there is no clash between the laws of the polis and the laws of the gods in the play and Greek attitudes about the divine authorship of the laws of the state. The third part will examine pollution for homicide and show that pollution was not an irrational dread of bloodshed but a religious view grounded in legal ideas. Pace Vernant and Dodds Oedipus in the play Oedipus Tyrannos is guilty by the laws of the state and polluted in the eyes of the gods. There are not two different standards at work. The fourth part will examine how priests of public
cults were subject to the same laws as other officials. The fifth part will examine the organization of private religious associations and show how these groups also followed the rule of law. There is a strong distinction between the officials of the association and the other members of the association. It also appears that like the officials of the polis, the officials of the koinon also have strict terms limits and serve for a year. Like the polis the associations are obsessed with keeping written records of their members. The decrees of the associations start with enactment
formulas that borrow the language of the Council and Assembly. The decrees of the associations also use entrenchment clauses similar to those found in decrees from Athens and from other Greek poleis, which reflect a concern for keeping the laws fixed and stable. The associations do not rely on friendship and good will to regulate ties between members, but formulate written laws and include penalties for violations. The officials of the associations undergo euthynai for their conduct in office, and as in the laws of Athens, officials are not allowed to receive honours for their overall conduct in office until they have passed their euthynai.