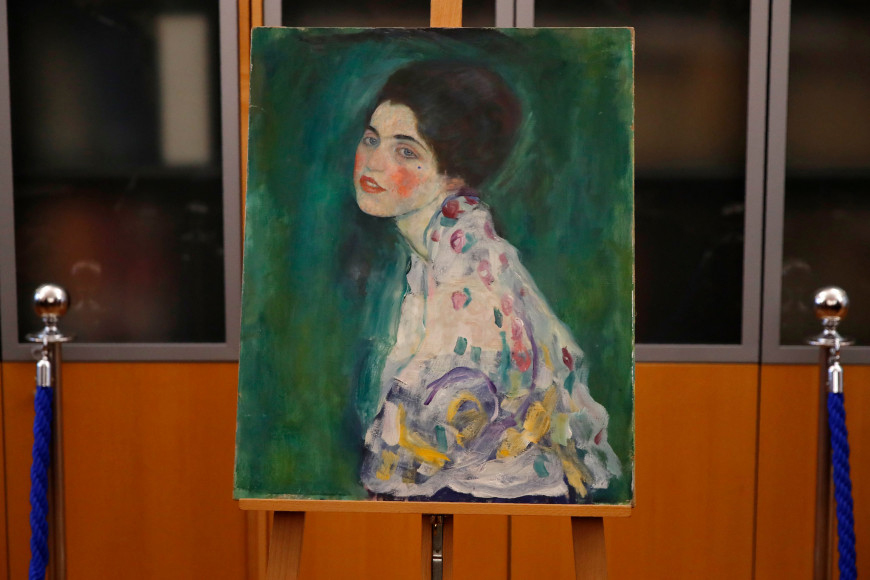 Procecutors in Piacenza are investigating the part played by Rossella Tiadina, widow of Stefano Fugazza, who was managing the Ricci Oddi modern art gallery when “Portrait of a Lady” disappeared in February 1997 in northern Italy. Tiadina whose house was searched is suspected of handling stolen goods.

Almost 23 years after its disappearance, the painting was found hidden in a wall of the Galleria d’arte moderna Ricci Oddi in December by two gardeners clearing ivy. Experts confirmed its authenticity in January. The last cycle of the investigation was brought on by what Fugazza, who died in 2009, had written in his diary since he confessed that he had considered organizing a fake theft of the painting so as to promote an upcoming exhibition of Klimt’s works. “I wondered what could be done to add notoriety to the exhibition”, he wrote. “And the idea that came to me was to organize, from the inside, a theft of the Klimt just before the opening of the exhibition and the work to then be rediscovered after the exhibition’s start”.

The extract was published for the first time in December 2016 in an article by the BBC and then by journalist of the Libertà newspaper Ermanno Mariani who also referred to the diary’s content two years later in his book about the case. “The case is a mystery”, the journalist said to the Guardian. “I don’t believe the widow was implicated, but she could be if Fugazza was involved because she was in the same house as the stolen object”.

The investigation into two men who confessed they had stolen and returned the painting is ongoing. The men, believed to be part of a gang connected to dozens of thefts in Piacenza, had originally confessed to be the perpetrators in a letter to Mariani in 2016. Their motive for their recent confession is thought to aim at securing a more lenient prison sentence for another theft. The confession came more than 20 years after the theft of the Klimt which means they would have avoided imprisonment for this theft as statutes for limitations for the crime would have expired. The portrait valued at €60m was painted by the Austrian artist between 1916 and 1917.