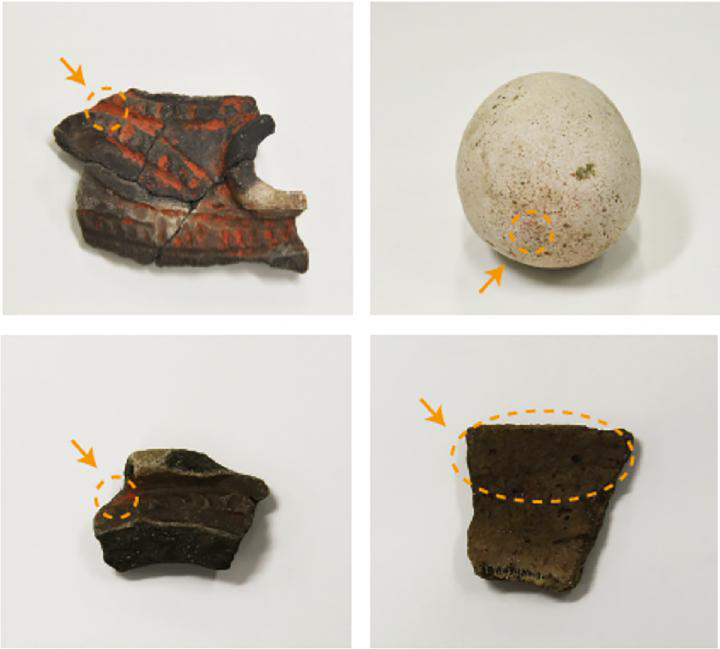 Researchers at the RIKEN Nishina Center for Accelerator-Based Science say

Researchers at the RIKEN Nishina Center for Accelerator-Based Science in Japan have demonstrated that combining a highly sensitive sulfur analysis technique with simple sulfur-free tape is an effective and harmless way to test extremely small samples of vermilion from artifacts that are thousands of years old. Published in the Journal of Archaeological Science: Reports, the study used this technique to confirm that trade likely existed between Japan’s northern island of Hokkaido and the western part of Japan’s mainland—a distance of over 1000 miles—more than 3000 years ago.

Vermilion, sometimes called cinnabar, is a bright red mineral that was used in paintings, figurines, statues, ceramics, and ritual ceremonies dating back almost 9000 years across Europe, Asia, and the Americas. The chemical name for vermilion is mercuric sulfide, and small variations in sulfur can distinguish one batch of vermilion from another. Within every vermilion sample, some of the sulfur atoms are standard, while some are isotopes with two extra neutrons. Because the ratio of these atoms does not change over time, it can be used as a fingerprint to identify where the sample came from.

Recently, Kazuya Takahashi and his colleagues in the Astro-Glaciology Research Group developed a highly sensitive method for analyzing sulfur isotope ratios that only requires 1 microgram of vermilion—one millionth of a gram—which is about 500 times smaller than what other methods need. This is important because the smaller the sample, the less damage to the artifacts being tested.

After developing this new technique, Takahashi realized that they needed a way to collect the tiny samples, keeping in mind that the samples need to be burned up to produce sulfur oxide gas during the analysis. The easiest way was to use a tiny 3 mm × 3 mm square of adhesive tape to pick up the vermilion from an artifact. Then, the vermillion and tape could be places into the apparatus and tested. However, most tape contains sulfur, and given the minuscule size of the sample, even the tiniest amount would throw off the results. After trying several different commercial tapes, he got lucky. “By chance, I met an old friend who works in a company that sells different kinds of tape. She knew of one tape that could be sulfur free, which was a great suggestion for me!”

The team tested this polyester adhesive tape as well as two other tapes from local stores. They found that the store-bought tapes contained about 0.5% sulfur, while the special tape did not contain any sulfur. Now they were ready to test the system on real artifacts.

An area in western Japan called Izumo contains an archaeological site with artifacts from a settlement about 3500 years ago. People have speculated that the people of that era traded extensively within Japan. With cooperation from the local government in Izumo, the researchers collected vermilion samples from artifacts excavated from the site and used their highly sensitive analysis technique to determine their sulfur isotope ratios. Then, they compared the sample ratios to the ratios found at eight cinnabar ore mines across Japan. They found that most of the artifacts contained vermilion that was likely mined in the Northern island of Hokkaido, more than 1000 miles away, rather than in closer mines located in western Japan.

Archaeologists often wish to analyze the origins of pigments on wall paintings or pottery, but in many cases, the artifacts are too important to damage even a small amount for sample collection. “Our method might open the doors for new research into ancient trade routes and the history of individual works of ancient art,” notes Takahashi.

The precision of the system can still be improved. “Analyzing sample origins using sulfur isotopic ratios is not sufficient at the present time,” says Takahashi. “Using ratios from multiple elements can enable us to estimate the origins more precisely than conventional methods can.” The team has already started analyzing lead (Pb) and sulfur isotopic ratios of pigment samples from ancient Roman wall paintings found in Spain.

As is often the case, the success of this project relied on technology that was actually created for a totally different purpose. “This is an intriguing application of our isotope analysis technique,” notes Yuko Motizuki, director of the Astro-Glaciology Research Group. “But it was originally developed for taking measurements in Antarctic ice cores, which is the main focus of our laboratory.

“We hope archaeologists and research centers around the world can use Takahashi’s technique to develop their own measurement systems and continue studying how ancient peoples interacted and traded across continents.”