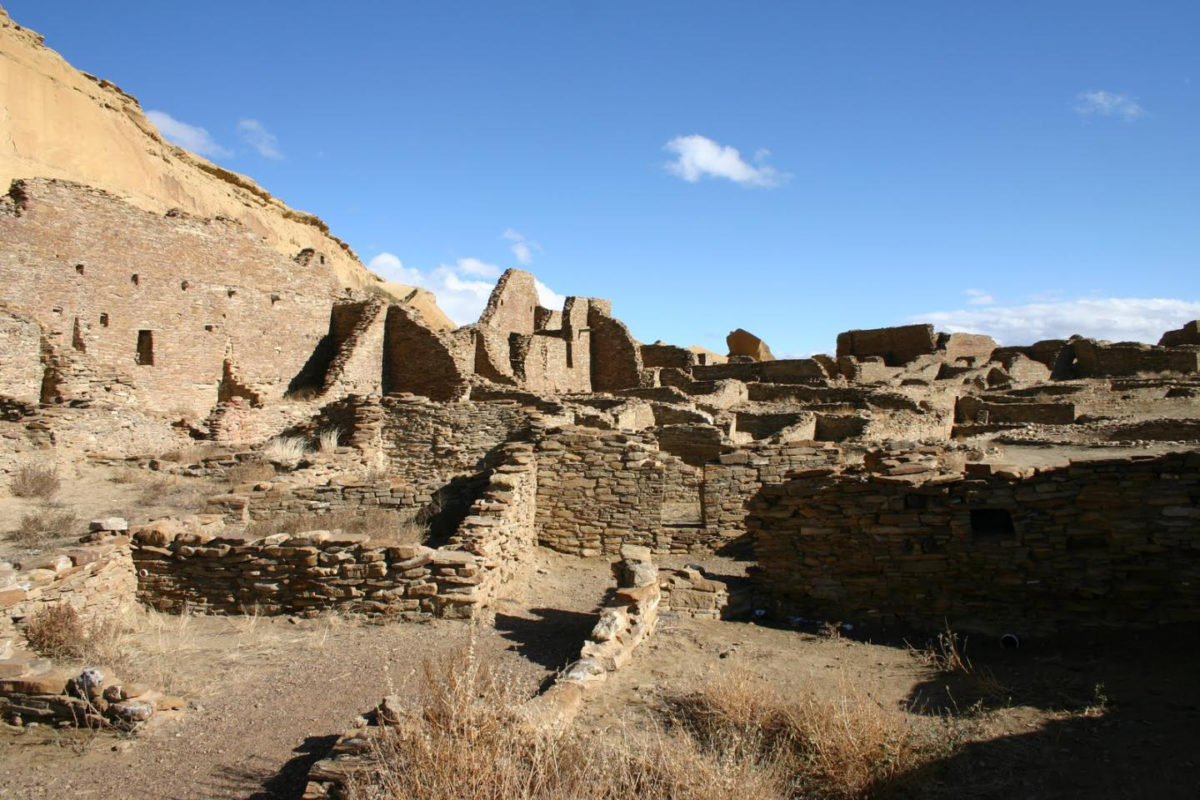 The Plaza Tree of Pueblo Bonito

A majestic ponderosa pine, standing tall in what is widely thought to have been the “center of the world” for the Ancestral Puebloan people, may have more mundane origins than previously believed, according to research led by tree-ring experts at the University of Arizona.

A study published in the journal American Antiquity provides new data that calls into question the long-held view of the Plaza Tree of Pueblo Bonito as the sole living tree in an otherwise treeless landscape, around which a regional metropolis in New Mexico’s Chaco Canyon was built.

Combining various lines of evidence, the study is the first to apply a technique called dendroprovenance to a sample of the plaza tree that uses tree-ring growth patterns to trace the tree’s origin. The data revealed that the tree did not grow where it was found, and is therefore unlikely to have played a role as significant as various authors have ascribed to it ever since it was discovered in 1924.

According to the study’s first author, Christopher Guiterman, who is an assistant research scientist at the University of Arizona’s Laboratory of Tree-Ring Research, “the tree goes back all the way to the birth of tree-ring science – a supposedly living tree growing in ‘downtown Chaco’ during the height of its occupancy – which would make it the only tree of its kind that we know of in southwestern archaeology.”

The largest of the buildings known as great houses in Chaco Canyon, Pueblo Bonito is considered widely as the center of the Chaco world, which spanned the four corners region all the way to the edge of the Colorado Plateau. Pueblo Bonito’s significance has been likened to Stonehenge in Great Britain and Machu Picchu in Peru. According to the National Park Service, the cultural thriving of the Chacoan people began in the mid 800s and lasted more than 300 years.

During that time, the occupants constructed massive stone buildings, or great houses, consisting of multiple stories that accommodated hundreds of rooms. By 1050, Chaco had become the ceremonial, administrative and economic center of the San Juan Basin and is thought to have served as a major hub connecting trading routes. Pueblo descendants consider Chaco a special gathering place where people shared ceremonies, traditions and knowledge.

During a 1924 dig at Pueblo Bonito, archeologists of the National Geographic Society excavated a 20-foot long pine log in the west courtyard of the monumental great house. The discovery itself was a sensation, Guiterman said.

“The likelihood of finding such a tree after lying undisturbed for 800-plus years seems unbelievable, but we know that is what happened because tree rings don’t lie,” he said.

The tree was reportedly found just beneath the present-day soil surface, lying on the last utilized pavement. Its “great, snag-like roots precluded the possibility of it ever having been moved,” according to the description of expedition leader Neil Judd of the Smithsonian Institution.

“It’s important to recognize that these are only the stubs of roots, not the entire root system,” said co-author Jeffrey Dean, UArizona professor emeritus of anthropology. “Lacking the root system, combined with the fact that the log was lying flat on top of the latest plaza surface, means that the plaza tree did not grow in the Pueblo Bonito Plaza.”

Dendrochronological analyses initiated in 1928 by Andrew Ellicott Douglass, the founder of the University of Arizona Laboratory of Tree-Ring Research, confirmed that the tree lived between 732 and 981, and likely longer, since its outermost wood had eroded away over time.

Guiterman said he had been vexed by the tree’s origin story for a long time. Was it the lone remnant of a pine forest growing in Chaco Canyon, the only tree that didn’t get cut down for some unknown reason? Or had it been lying there undisturbed all along, even during the peak of the Chacoan culture?

“You don’t just find a 1,000-year-old piece of wood on the ground like that,” said Guiterman, whose earlier research in the School of Natural Resources and the Environment revealed that the 25,000 trees used to build Pueblo Bonito did not grow nearby, but were transported from distant mountain ranges.

To find out where the plaza tree had come from, Guiterman and his co-authors assembled three lines of evidence, “not unlike building a legal case,” as he put it. They scrutinized documentary records, including unpublished correspondence and reports from the early archeological expeditions, strontium isotope signatures from pine trees living in the Chaco Canyon area today and tree-ring patterns that allow scientists to pinpoint the source of the wood in question.

While winter precipitation patterns are fairly uniform across Arizona, New Mexico and Colorado, the summer rainstorms known as monsoons are much more local, Guiterman explained, and the resulting variation in tree-ring patterns allows researchers to match a wood sample to the area where it grew.

“We have this incredible database from 100-plus years of tree-ring science,” said Guiterman, who has dated hundreds of trees. “Trees from the San Juan Mountains, the Jemez Mountains or the Chuska Mountains – they all have their own kind of flavor, their own peculiar signature.”

Based on the combined analyses of the available evidence, Guiterman and his co-authors conclude that the Plaza Tree of Pueblo Bonito did not grow in Pueblo Bonito or Chaco Canyon. Instead, it most likely was hauled in from the Chuska Mountain range 50 miles west of Chaco Canyon, probably along with many other ponderosa pine beams used in construction. The tree lived in the Chuska Mountains for more than 250 years.

“We will never know exactly when it died because its outer sapwood rings were lost to decay,” the authors wrote, “but we estimate that it was living until the early 1100s. Following its death, by either natural causes or cutting, it was transported to Pueblo Bonito in the 12th century, where it was either abandoned or employed for some purpose (possibly as a standing pole). It could have toppled or been left standing to eventually collapse onto the plaza. Finally, it was buried by windblown sand over the centuries.”

Yet, even knowing the likely birthplace of Pueblo Bonito’s Plaza Tree, the mystery of its purpose remains, Guiterman said.

“Why did the ancient Chacoans carry this tree there, and how?” he said. “We don’t see any drag marks, so they must have treated these heavy beams with great care. How they did that is up for debate.”

Various roles for the plaza tree of Pueblo Bonito have been brought forth. For example, it could have been used as a ceremonial pole or as a gnomon – the part of a sundial that casts a shadow. Or perhaps it was simply leftover lumber or cast aside as firewood.

According to Barbara Mills, a Regents Professor in the UArizona School of Anthropology who was not involved in the study, it is unlikely a conclusive answer will ever be found.

“Nobody knows what the tree was used for, and unless there were any further clues waiting to be uncovered, such as traces of pollen left behind on the log, we have no way of knowing,” Mills said.

Pine trees are known to play roles in present-day Puebloan life. During the San Geronimo Festival held in Taos, New Mexico, for example, pine trees are brought in and used for ceremonial pole climbing or to hang bags with offerings.

“It is not uncommon to bring a pine tree into the plaza during ceremonies, and certain kinds of dancers or kachinas hold boughs of pine in their hands during their dances,” Mills said, “but we don’t know how far back those practices go. We rely on descendant oral tradition as much as we can, but we have to be careful to not over-extend our interpretations and use as many lines of evidence as we can.”