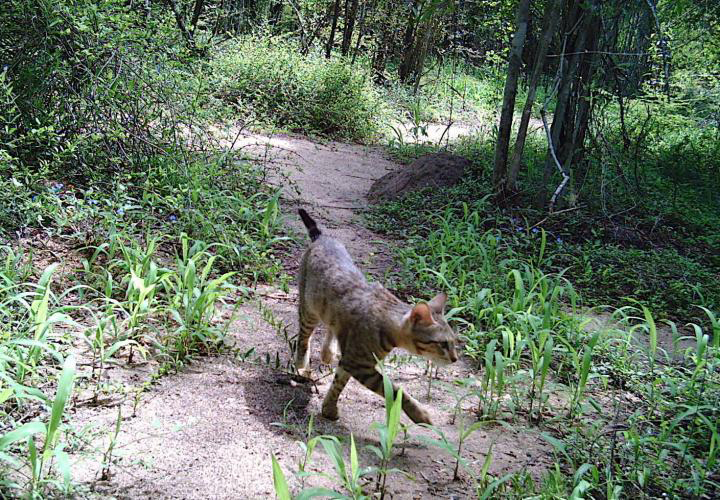 They came more than 1,000 years ago on trade ships to the island

In her 30 years working as a researcher in Madagascar, CU Boulder Anthropology Professor Michelle Sauther has had a number of chance encounters with a strange forest creature: a wild, oversized cat with a characteristic tabby-like coloring.

“When I first started working in Madagascar, I noticed that these cats all seemed to look the same,” said Sauther, whose research focuses on primates. “They were big, and they were always the same color.”

Scientists had no idea where they came from – the island nation has no native cats of its own.

Now, in a study published in Conservation Genetics, Sauther and her colleagues have drawn on genetic data from dozens of these wild cats to narrow in on an answer. According to their findings, the animals may not be newcomers to Madagascar at all. Instead, the cats seemed to have hitched a ride to the island on trade ships from as far away as Kuwait hundreds or even more than 1,000 years ago.

The results offer a first step toward better understanding the threat that these weird felines might pose to Madagascar’s native species. They include the fossa, a forest predator that looks feline but is more closely related to the mongoose.

The case of the forest cat also points to a global, and hairball-rich, phenomenon that Sauther calls the “cat diaspora.”

“Cats have essentially gone with us everywhere we’ve gone,” Sauther said. “We can see that journey of humans and their pets going back pretty deep in time.”

That journey has brought pitfalls, too. Over the last century, hungry cats have run wild on islands around the world. They’ve even hunted local birds, mammals and reptiles to extinction in places like Hawaii, the West Indies and New Zealand.

What’s happening in Madagascar, however, is less clear.

In part, that’s because researchers don’t know much about the island’s forest cats. Many Malagasy are familiar with the beasts, which often sneak into their villages to eat their chickens. They call them “ampaha,” “fitoaty” and “kary” among other names and distinguish them from the island’s pet cat population.

Still, Sauther said that she and other researchers have seen forest cats stalking lemurs, and that has her worried. She has a soft spot in her heart for these “underdogs” of the primate world, and many lemur populations are already in deep trouble in Madagascar.

“The real worry is: What are these cats doing?” Sauther said. “Are they posing a threat to animals in Madagascar? Maybe they’re just part of the local ecology.”

To find out, Sauther and her colleagues analyzed the DNA from 30 forest cats from sites in the north and south of Madagascar.

And, to their surprise, the cats seemed to have traveled to the island from far away–really far away.

“They were probably part of the maritime ships that came to Madagascar along these Arab routes,” Sauther said.

The team’s DNA results identified the cats as belonging to Felis catus, the same domestic species that curls up on the laps of people worldwide. But the animals also seemed to have originated from the Arabian Sea region around modern-day Dubai, Oman and Kuwait. Sauther said that the cats may have stowed away on merchant ships following trade routes that have existed for more than 1,000 years.

“They would come down along the East Coast of Africa. They would stop at the islands of Lamu and Pate, and then it’s just barely a jump to go over to Madagascar,” Sauther said.

While the team can’t pinpoint exactly when the cats arrived on the island, Sauther thinks they may have been residents for a while–and have possibly become a normal part of the local forests.

“That’s not to say they’re not a threat, but we need to understand their biology and their history to understand how we proceed in terms of conservation policy,” Sauther said.

For now, she’s just happy to have the answer to a question that’s bugged her for several decades.

“This study has answered a mystery that not just me but a lot of researchers in Madagascar have wondered about,” Sauther said. “We now know that these mysterious cats are domestic cats with a really interesting backstory.”