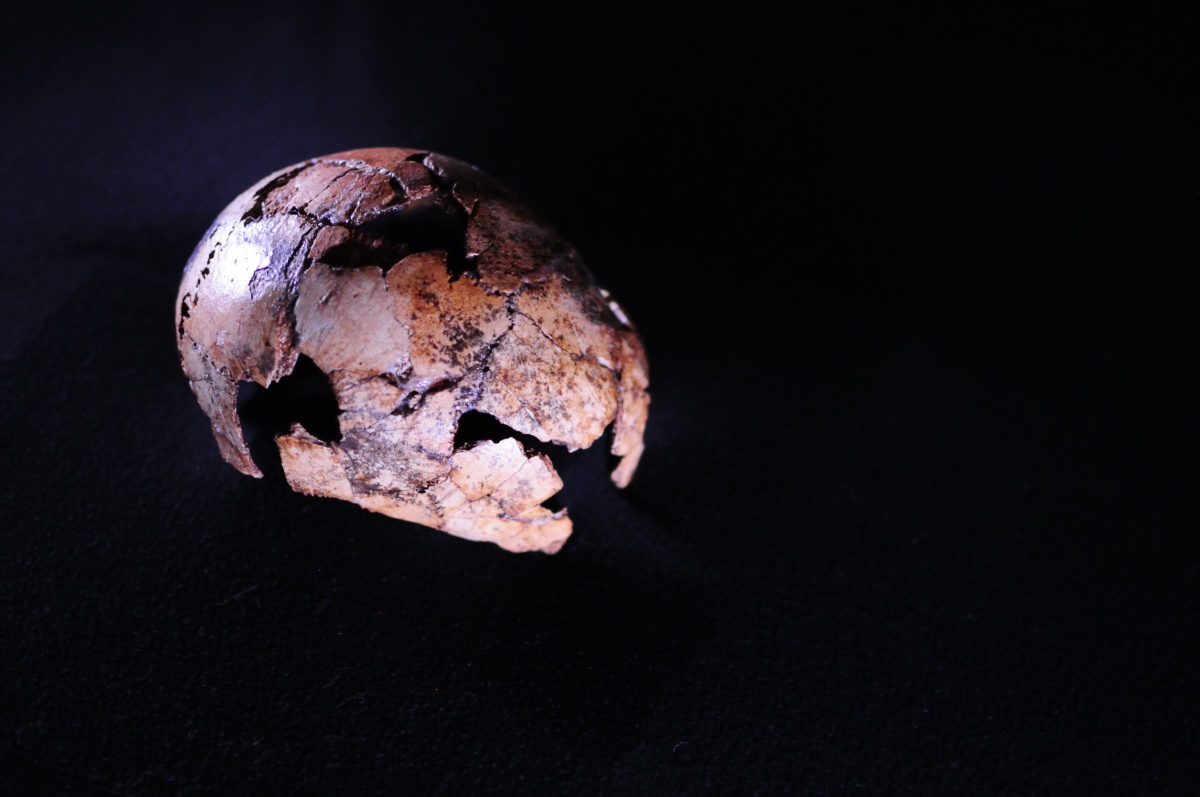 Our direct human ancestor Homo erectus is older than we thought

Research based on excavation finds at Drimolen

An unusual skullcap and thousands of clues have created a southern twist to the story of human ancestors, in research published in Science on 3 April.

The rolling hills northwest of Johannesburg are famous for fossils of human-like creatures called hominins. Because of this, the area is known as the Cradle of Humankind.

“During our field school excavations at Drimolen, a student began uncovering a cluster of fragments. We could see that they were parts of a skull. But they weren’t immediately identifiable,” says Ms Stephanie Baker.

Baker is a researcher and PhD candidate at the Palaeo-Research Institute at the University of Johannesburg. She manages research at the Drimolen fossil site in the Cradle of Humankind where the fragments of DNH 134 were found.

The international team was led by researchers from La Trobe University in Australia and Washington University in St. Louis in the United States.

Fossils that are millions of years old often come out of the soil in fragments. The fragments need to be rebuilt before researchers can confidently identify what kind of animal they came from.

“Over the course of the field season more and more fragments were uncovered. We began piecing them together. No one could decide what this skullcap was from, until one night it all came together – and we realised we were looking at a hominin!” she says. They named the skullcap DNH 134.

The next question was: what kind of hominin? The Cradle of Humankind has several different species of human ancestors and the Drimolen site had at least two kinds.

“This find really challenged us. We compared the assembled skullcap to all of the other examples of hominins in the Cradle area. Eventually, its teardrop shape and relatively big brain cavity meant we were looking at Homo erectus,” says Baker.

Homo erectus is one of our direct human ancestors and is best known for migrating out of Africa into the rest of the world.

These hominins walked upright and were a more human-like species than the other hominins found in the Cradle. They had shorter arms and longer legs. They could walk and run for longer distances over the African grasslands than the others.

Once the question of ‘which species?’ was answered, two other huge questions presented themselves. How long ago was this individual alive? And how old were they when they died?

The researchers knew that no other Homo erectus fossils had ever been found in South Africa before. Even more surprising was the time period suggested by the soil layers the skull fragments were found in. “Before we found DNH 134, we knew that the oldest Homo erectus in the world was from Dmanisi in Georgia dating to 1.8 million years ago,” says Baker.

Building a 3D puzzle over time

Trying to figure out how old fossils are from the caves west of Johannesburg is quite tricky. There were no volcanoes during the time of the hominins, so there are no ash layers to give the researchers quick age estimates, like they use for eastern African sites.

But while they were uncovering the fragments at Drimolen, they kept and recorded every clue they could find. This included fragments of small animals like bats and lizards, but also things like soil samples.

They can also tell exactly where in 3D-space in the Drimolen quarry each little fossil fragment was found.

Then the research team used every possible dating technique available to get the most accurate possible date for the deposit. This included Palaeomagnetic dating, Electron spin resonance, Uranium lead dating, and faunal dating.

“We collated all of the dates from each of these techniques and together they showed that we had a very precise age. We now know that the Drimolen Main Quarry and all of the fossils in it, are dated from 2.04 to 1.95 million years ago,” says Baker.

That means that DNH 134 is much older than the next oldest Homo erectus in Africa; and from Georgia.

“The age of the DNH 134 fossil shows that Homo erectus existed 150,000 to 200,000 years earlier than previously thought,” says Professor Andy Herries. Herries is the project co-director with Ms Baker and lead researcher. He is Head of the Department of Archaeology and History, at La Trobe University in Australia and an associate in the Palaeo-Research Institute at UJ.

Because Homo erectus is one of our direct ancestors, the discovery has implications for the origins of modern humans.

“Until this find, we always assumed Homo erectus originated from eastern Africa. But DNH 134 shows that Homo erectus, one of our direct ancestors, possibly comes from southern Africa instead. That would mean that they later moved northwards into East Africa. From there they went through North Africa to populate the rest of the world,” says Baker.

The skull is also unusual because it is the skull of a young Homo erectus.

“The Homo erectus skull we found, was likely aged between two and three years old when it died,” says Herries.

The age of the DNH 134 skullcap shows something else – that three species of early human ancestor lived in southern Africa at the same time at the Drimolen fossil site.

“We can now say Homo erectus shared the landscape with two other types of humans in South Africa, Paranthropus and Australopithecus,” says Herries.

This might mean they needed to use different parts of the landscape to avoid competing with one another. For a start, they looked different.

“Paranthropus robustus ate things like roots and tubers, which is why their teeth are really big. They used their enormous teeth for grinding down what we call fall-back foods – tough hard plants.”

In comparison to the other two species, Homo erectus hominins were tall and slender. They ate things which are easier to digest, like fruits and berries.

“We also know that they were eating meat, but we aren’t exactly sure how they were getting it yet. We can say that at least these early Homo erectus weren’t hunting with any weaponry yet,” says Baker.

“We also know that they were able to cover long distances. Which turned out lucky for them, because during their time, the climate changed in southern Africa.

Paranthropus and Australopithecus evolved in warm and humid climates and were used to that. But then the weather began to shift from warm and humid, to cool and dry,” she says.

Gradually the tree-cover diminished, and grasses took their place. Eventually the forests were replaced with the African savannah grasslands of today. The cooler weather suited the more mobile and social Homo erectus better. But it meant that Paranthropus had to rely on less desirable foods.