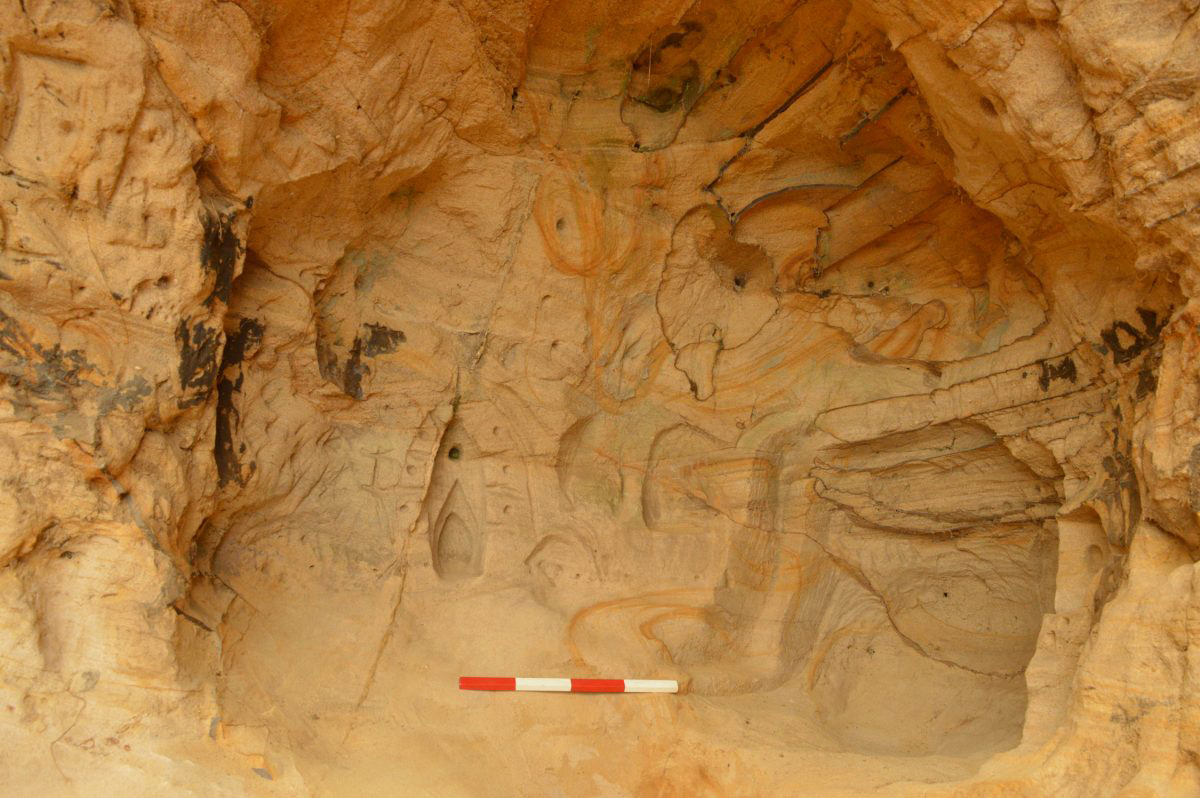 A team of rail workers delivering landslip repair works near Guildford have uncovered a small cave believed to be from the 14th century.

The sandstone cave is made up of several sections ranging from 0.3 metres to about 0.7 metres high and was discovered during work to stabilise and protect the railway embankment. The cave may once have been much larger, but only this small piece survived the digging of the railway cutting through the hill in the early 1840s.

Initial findings by a specialist archaeological contractor suggest that it was a later medieval shrine or hermitage associated with the early 14th century chapel of St Catherine, the ruins of which are situated on the hill nearby. It may even have earlier origins as a site of cult activity, due to its pre-14th century name of Drakehill – ‘Hill of the Dragon’.

Images taken from the site show the presence of a Gothic niche decorated in dots with a Calvery cross nearby.

There are a total of around seven or eight further niches and experts found considerable evidence of writing and other markings across the cave ceiling. The cave is partially covered in deposits of black dust, which is believed to be soot from lamps. The remains of two suspected fire-pits were also uncovered in the cave floor. The hope is that radiocarbon dating can be used to establish the period when the cave was in use.

Mark Killick, Network Rail Wessex route director, said: “This is an unexpected and fascinating discovery that helps to visualise and understand the rich history of the area.

“A full and detailed record of the cave has been made and every effort will be made to preserve elements where possible during the regrading of the delicate and vulnerable sandstone cutting.”

Tony Howe, historic environment planning manager and county archaeologist at Surrey County Council, said: “The discovery of this cavern is tremendously exciting. It’s very early in the process of understanding its full significance, but the potential for knowledge acquisition is huge.

“We’re looking forward to learning an awful lot more about the site as studies progress.”

A spokesperson from Archaeology South East, said: “The cave contained what appear to be shrines or decorative niches, together with carved initials and other markings. The old name for St Catherine’s Hill is Drakehill ‘The Hill of the Dragon’, so this has obviously been a site of ritual significance long before the construction of the church on the top of the hill in the late 13th century.

“Work is underway to analyse soot and charcoal found inside the cave, which will hopefully tell us more about how and when it was used.”