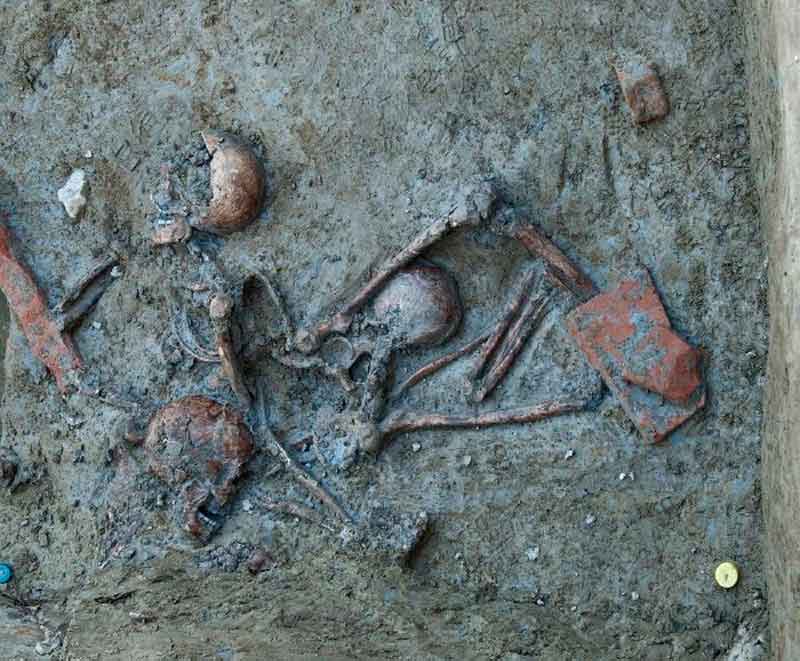 Three incomplete skeletons have been uncovered in Modena

Three incomplete skeletons have been uncovered in Modena, Italy, and point to a 2000 year old Roman mystery which is being investigated by archaeologists and researchers from the Superintendence for Archaeological Heritage of the Emilia-Romagna.

The discovery was made at the site of a new development to the east of Modena along the Via Emilia, between San Lazzaro and Fossalta. At a depth of only 60 cm the archaeologists from ArcheoModena found the remains of a cremation necropolis and a 1st century Roman irrigation ditch/canal. The necropolis, which ran along the ancient Via Emilia, produced a few cremation burials and the remains of a shrine that had been robbed out in antiquity.

But as the team excavated into the flood deposits within the irrigation ditch they made a grisly discovery of three non-cremated individuals. It appeared from closer examination that these skeletal remains did not represent straight forward burials and may have undergone violent deaths before being hastily thrown into the ditch and covered over.

Dug on the edges of the city to irrigate the fields, it would have been easy to hide their remains at the bottom of this ditch, weighing them down with bricks from the nearby cemetery to prevent them surfacing. There they remained beneath the flowing water for decades until repeated localised floods filled the channel and surrounding area with thin laminated layers of mud.

The dating of the context is attributable to a period between the first century BC and first century AD suggested by brick, pieces of gravestone and Dressel I amphorae fragments found around the skeletons.

It is assumed that missing skeletal parts became lost post-mortem as the bodies lay beneath the water of the irrigation ditch, but initial observations of the remaining bones began to paint a distinctly unsavoury picture of how this male trio met their deaths.

The skeleton of a youth aged 16-20 years retained only his pelvis and two legs: missing the whole upper body apart from his skull which was found between his legs along with his arms. Oblique cut marks were observed on his legs, about 1cm long and with deep sharp profiles.

The second individual, an adult of about 30 years, had his arms crossed behind his back – perhaps implying that his wrists had been bound – but missing the lower half of the body including the pelvis.

The third man, aged 18-25 years, retained only his head, shoulder and part of one arm.

The archaeologists have speculated that the trio may have been escaped slaves who had suffered the severest of punishments or even victims of a blood feud.

“The hypothesis that it is a murder is certainly plausible,” comments Prof. Gianfranco Purpura, professor of Roman Law at the University of Palermo. Among other things, the proximity of the city, along the public highway, leads to the suggestion that the archaeologists have uncovered a long forgotten crime from some 2000 years ago.

Further analysis on the remains is expected to be carried out to try and piece together the final moments of these three individuals.