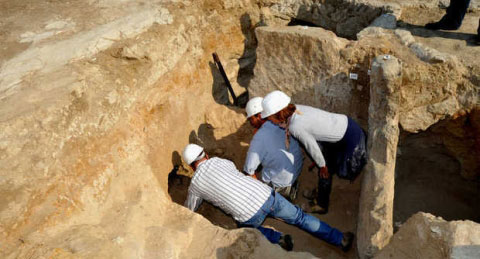 During excavations at the Vulci Archaeological Naturalistic Park

During excavations at the Vulci Archaeological Naturalistic Park north of Rome, archaeologists have revealed an Etruscan tomb, dating to the late 7th century BC. The tomb, which is believed to have been that of a woman, contained intact grave goods, such as painted beads, an iron fibula, jars and a bucchero in Corinthian style.

The Naturalistic Archeological Park of Vulci is spread over a scarcely inhabited section of the Tuscan-Lazio Maremma, between the villages of Montalto di Castro and Canino. Vulci was an economically thriving centre thanks to commercial contacts with Greece and the East that influenced its culture. It reached its peak between late 7th century BC and during the entire 6th century BC, when numerous stone, bronze and pottery workshops flourished. The remains from both the Etruscan phase and the period of Roman domination are in good condition. The park contains an Etruscan and Ancient Roman city, and necropolis.

Excavations at the site are ongoing. Archaeologists hope they will discover more finds in order to build a picture of the daily life of the Etruscans and their burial practices.

The grave goods have been transferred to a laboratory in Montalto di Castro for restoration.