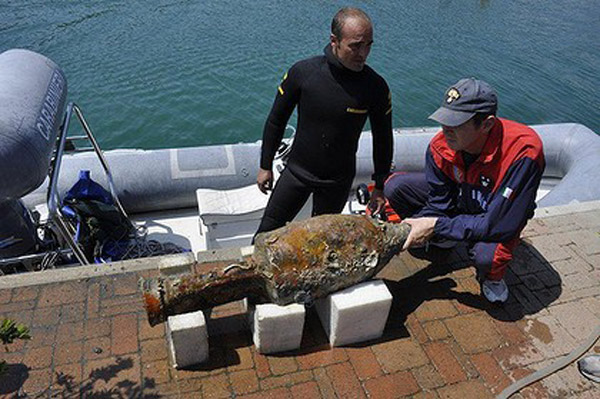 Sea gives up a portrait of ancient Rome

FOR 2000 years the ancient and decomposing hulk lay buried in deep, muddy waters, off the Italian coast.

Everybody knew it was down there because for more than 80 years local fishermen had been collecting bits of Roman artefacts and pots in their nets.

Finds of this nature are not unusual in Italian waters, which are littered with treasures going back thousands of years.

But these artefacts told a different story, and it was good enough to attract the interest of the archaeological community and a police commander who heads an expert diving squad in the city of Genoa.

Lieutenant-Colonel Francesco Schilardi, the commanding officer of the police team that found the wreck, has been referred to as the ”Top Gun” of the oceans because of the secrets he and his team unravel by locating and recovering wrecks and long-lost treasures.

This time the team, including state archaeologists and historians, were so sure that the ocean, close to the town of Varazze, Liguria, was hiding something special that they went to a little more expense to find out what was down there. They used a submarine, a robot and sophisticated mapping and tracking equipment, along with the results of extensive historical studies of the area.

The efforts paid off, with a find described as ”one of the most important” of its kind.

They uncovered a 2000-year-old Roman vessel buried 70-100 metres deep and encased in layers of mud that promises to reveal secrets about the way of life in the 1st century AD, not only in Rome but in other regions that traded with the empire.

The discovery of the food transport vessel, with an estimated 200 clay amphorae on board – and with caps of pine and pitch intact – sent ripples of excitement through archaeological communities partly because the ship and its contents are remarkably well preserved.

”It is a relic of great value,” Lieutenant-Colonel Schilardi, told Italian newspaper La Repubblica. It goes back, he said, to the Roman republican and imperial age, when Rome traded with the Mediterranean countries, primarily Spain, and when the Ligurian Sea and the nerve centre, or the crossroads of Roman marketing and trade at the time.

The sea lanes in the area were used by the Romans to export food including honey, spices and wine from the late Roman Republican era to the beginning of the Augustan Age.

Lieutenant-Colonel Schilardi was also quoted in the Italian press saying the fact the containers were so well preserved might help to reveal important information about diet at the time and perhaps add to cultural and commercial profiles of the period. The fact the wreck was found at such depth, and encased in a bed of sandy mud that is typical of the area, helped ensure the vessel remained in a good state of preservation, he said.

Authorities have sealed off the area to prevent treasure hunters from plundering the site and the attention of the experts has turned to getting finance and state support to recover the wreck and its contents.

Meanwhile the search continues, with archaeologists excited by sonar readings that indicate the sand covering the vessel that may well contain further treasures.