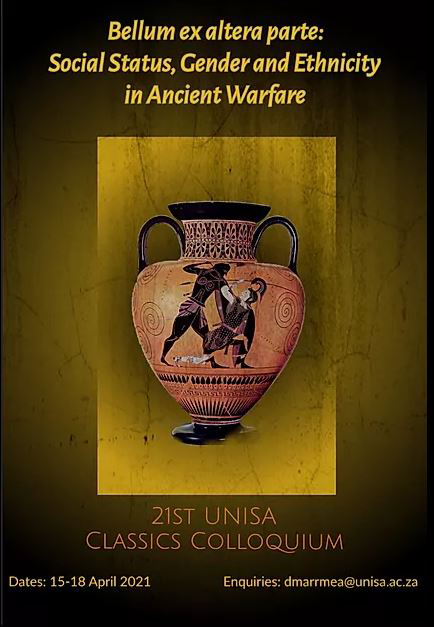 The annual Unisa Classics Colloquium will be held in Pretoria from 15 to 18 April 2021. The call for paper proposals will close at the end of January 2021.

Ancient artists and writers focused heavily on the role of elite male citizens in their representations of warfare in the ancient world, and this was for the most part also the focus of scholarship on warfare up to the mid-20th century.  But an interest in ideologically excluded groups, often called the ‘other’ or the ‘subaltern’ in scholarship, gained ground in the second half of the 20th century, and in the last decade or two the subject of war itself is now being examined for information on groups that were not at the top of the social hierarchy (although from the 8th century BC to the 5th century CE the composition of these groups was certainly subject to fluctuation). Our theme this year therefore focuses on those who populated these categories within the context of warfare in the ancient world.

A wide variety of ancient source material reveals perspectives on – but also experiences of – those social, sexual or ethnic groups who have left little or no record of their experience in war and certainly therefore appear to have had no voice in the actual events. For the voices of the sub-elites, of non-males, and of non-Greeks and non-Romans in the arena of war, we therefore encourage papers which examine not only literary works of antiquity, but also documentary sources and material culture to flesh out these perspectives. The aim is to examine not only the perception of these groups who were exploited or victimised, but to expose the reality in that they may have also been the agents of not only military events but also therefore influence the subsequent narrative of various episodes in antiquity.

The conference theme thus hopes to offer plenty of areas for fruitful exploration, of which the following topics are but a sample:
-Experiences of other ethnic groups fighting against, and for, ancient Greek city-states and Rome.
-Perspectives on the rank-and-file soldier experience in warfare.
-Honour/dishonour and the Other in the context of war.
-Wartime commercial opportunities for sub-elites.
-Baggage trains and onlookers in wartime.
-Reintegration of the soldier into society.
-Prejudice and emulation of other ethnic groups.
-Evidence of all-female, all-slave, or other sub-elite units in warfare.
-Fighting styles of slaves, women and other non-elite groups.
-Relations between auxiliary or mercenary forces and Greek or Roman authorities.
-Repercussions of warfare for sub-elite groups.
-Theoretical and methodological approaches to dealing with the dominant elite male perspective of the ancient sources.
-Loyalty, common ethos and other motivators for non-elite combatants.

Paper proposals (approximately 300 words) are invited for papers of 30 minutes debating current issues and problems on the conference theme.

Deadline for abstracts: end of January 2021.

Details of the conference venue, accommodation and other relevant information is available on the conference website: https://dmarrmea3.wixsite.com/website