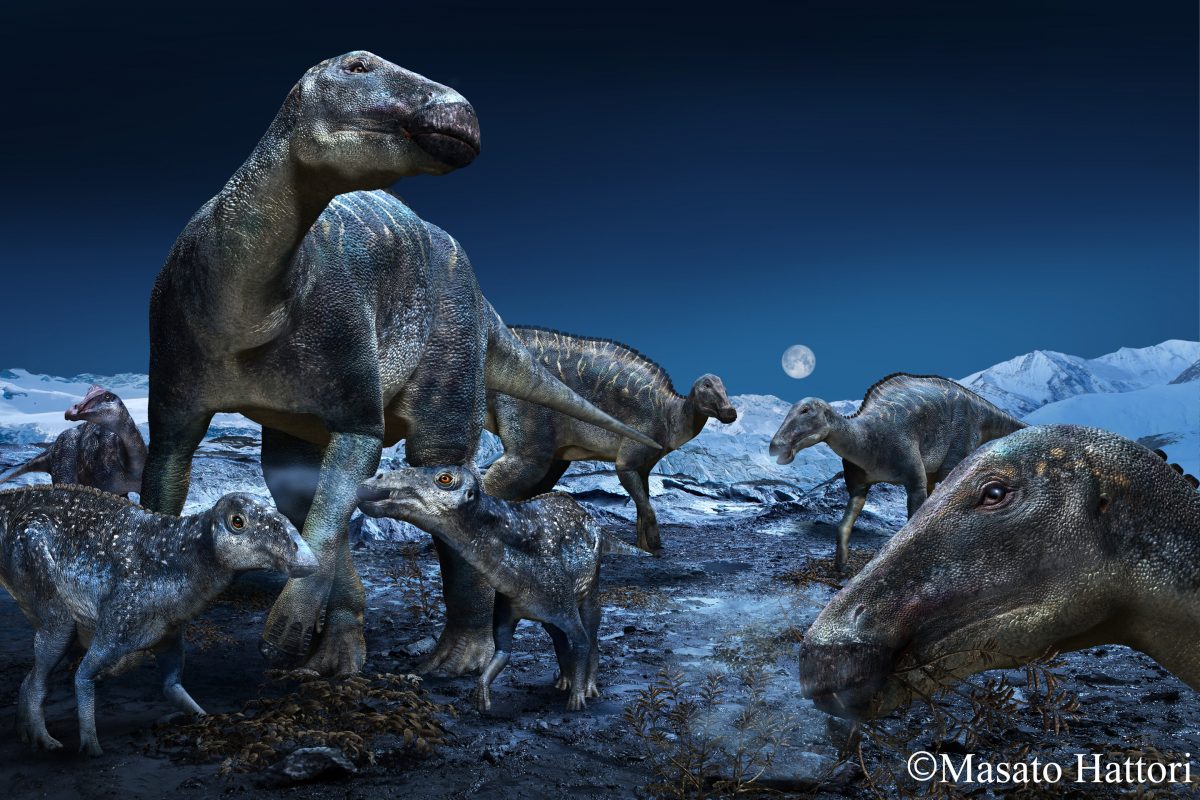 A new look at the ‘caribou of the Cretaceous’

A new study by an international team from the Perot Museum of Nature and Science in Dallas and Hokkaido University and Okayama University of Science in Japan further explores the proliferation of the most commonly occurring duck-billed dinosaur of the ancient Arctic as the genus Edmontosaurus.

The findings also reinforce that the hadrosaurs – known as the “caribou of the Cretaceous” – had a huge geographical distribution of approximately 60 degrees of latitude, spanning the North American West from Alaska to Colorado.

The scientific paper describing the find – titled “Re-examination of the cranial osteology of the Arctic Alaskan hadrosaurine with implications for its taxonomic status” – has been posted in PLOS ONE. The authors of the report are Ryuji Takasaki of Okayama University of Science in Japan; Anthony R. Fiorillo, Ph.D. and Ronald S. Tykoski, Ph.D. of the Perot Museum of Nature and Science in Dallas, Texas; and Yoshitsugu Kobayashi, Ph.D. of Hokkaido University Museum in Japan. To read the entire manuscript and view renderings, go to https://journals.plos.org/plosone/article?id=10.1371/journal.pone.0232410.

“Recent studies have identified new species of hadrosaurs in Alaska, but our research shows that these Arctic hadrosaurs actually belong to the genus Edmontosaurus, an abundant and previously recognized genus of duck-billed dinosaur known from Alberta south to Colorado,” said Takasaki.

The report states that anatomical comparisons and phylogenetic analyses clearly demonstrate that attribution of the Alaskan hadrosaurines to a unique genus Ugrunaaluk is inappropriate, and they are now considered as a junior synonym of Edmontosaurus, a hadrosaurines genus previously known from lower latitude North America roughly in between northern Colorado (N40?) to southern Alberta (N53?).

The fossils used for this study were found primarily in the Liscomb Bonebed, Prince Creek Formation of the North Slope of Alaska, the location of the first dinosaur fossils discovered in the Arctic.

The team’s research also show that the plant-eating hadrosaurs were taking over parts of North America during the Cretaceous, suggesting that Edmontosaurus was likely an ecological generalist.

“In other words, Edmontosaurus was a highly successful dinosaur that could adapt to a wide variety of environmental conditions,” said Fiorillo. “It’s not unrealistic to compare them to generalized animals today – such as mountain sheep, wolves and cougars in terms of their range and numbers – that also roam greater geographic distributions.”

Members of this team also found ties to Kamuysaurus japonicus, a new genus species they discovered near Hokkaido, Japan, and named in 2019.

“Combined with the newly named Kamuysaurus of Japan, Alaska Edmontosaurus shows that this group of hadrosaurs, the Edmontosaurini, were widely distributed in the northern circum-Pacific region, meaning that they were incredibly successful dinosaurs,” said Kobayashi. “It’s fascinating to think they likely used the ancestral Bering Land Bridge between Asia and North America for migration in a manner similar to mammoths, woolly rhinoceroses and early humans.”

“This study is a wonderful example of why paleontologists need to be more aware of how individual growth and life stage of fossils matter when we try to interpret the anatomical features preserved in them. If you don’t, you run the risk of erroneously erecting a new ‘genus’ or species based on juvenile traits that will change or vanish as the individual creature grows up – and winds up being an adult of an already-known ‘genus’ or species!,” said Tykoski. “Our study shows that was probably the case with these juvenile duck-billed dinosaurs from the ancient Arctic of Alaska.”