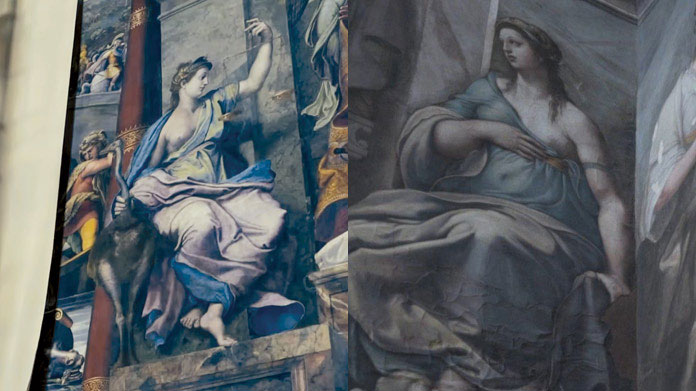 New masterpieces by Raphael discovered in the Vatican

Possibly the last sample of his work before his death

New masterpieces by Raphael were uncovered in the Vatican during recent restoration work in the Hall of Constantine. Experts believe these may be examples of the last work of the Renaissance painter before his sudden death in 1520.

They are two female figures making up part of the murals that adorn the Hall of Constantine, a monumental space intended for holding diplomatic gatherings. The figures can be identified as allegories of Justice (Latin: Iustitia) and Friendship (Comitas) and are part of the hall’s iconography thematically linked with Constantine the Great and commissioned by Pope Leo X of the Medici family.

The work stands out for its technical details: in its creation, Raphael used oil paints which he applied to an substructure comprising a layer of hot rosin and another of white plaster. The nails supporting the rosin layer were in fact recovered  from under the wall surface.

Stylistic details show that the two figures may be examples of Raphael’s last works. The “hand” of the iconic artist is discernible  in the two allegories when one compares them with the other figures which are attributed to the artist’s apprentices and collaborators who had to complete the work after his sudden death in 1520. If this is the case, Raphael’s creative activity did not end with the “Transfiguration” (his work in collaboration with Sebastiano del Piombo) as previously believed, but it is the two allegories that make up his Swan Song.

According to the Vatican News, the new masterpieces were found during restoration work carried out in 2015 by the Vatican Museums’ Restoration Laboratories under the supervision of Francesca Persegati, scientific direction of  Guido Cornini, and coordination of Fabio Piacentini.

During the project, experts focused on cleaning Raphael’s masterpiece using methods that allow its characteristic colour tones to appear. So far, the restoration of Hall’s three walls has been completed, while the fourth wall, depicting the “Gift of Rome”scene and painted by Raphael’s disciples, is to be restored during the summer.

Results of the restoration work to date along with the new masterpieces were uncovered on May 13 in the presence of the Vatican Museums’ Director Barbara Jatta, technicians and experts.

The Vatican Museums reopen from June 1.