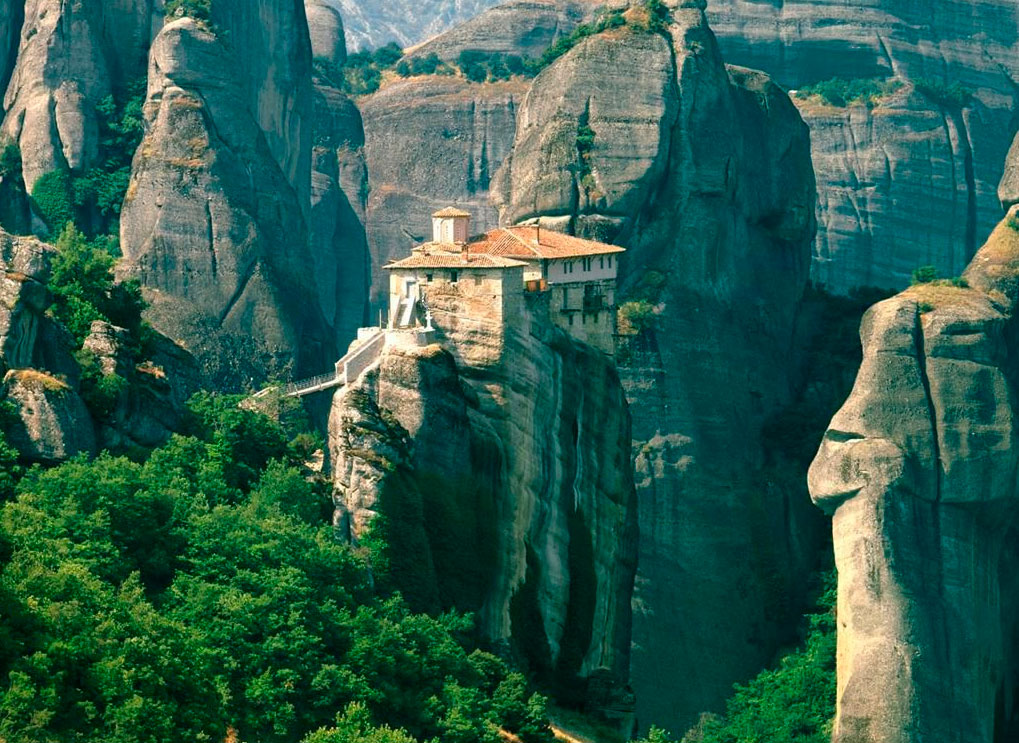 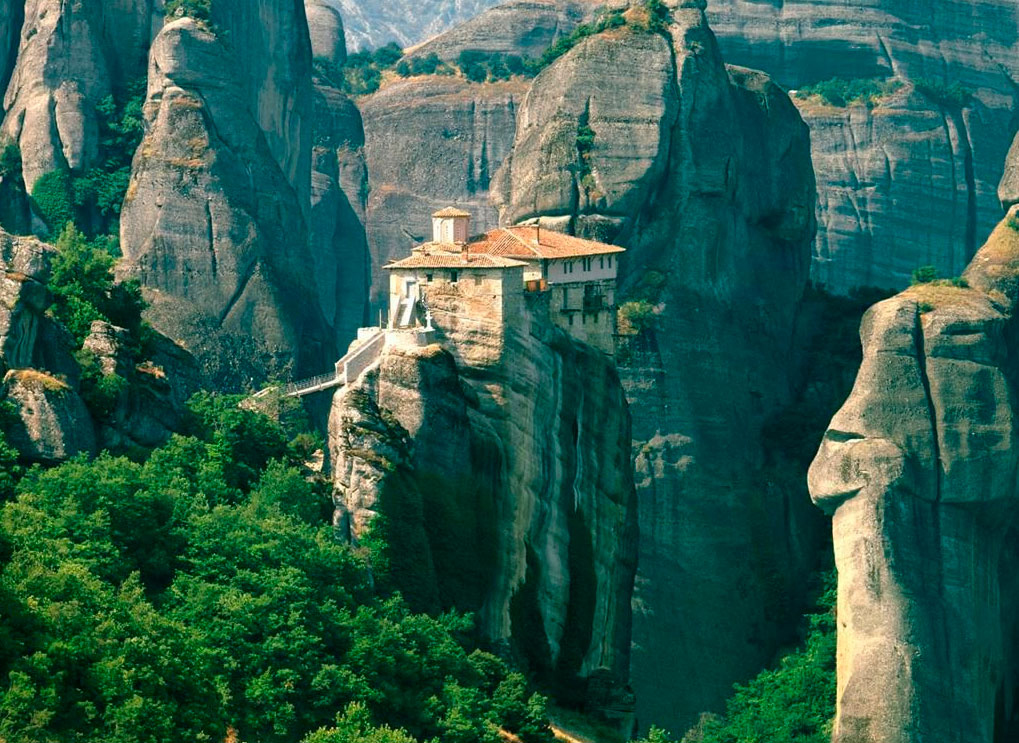 These awe inspiring rock formations, a unique geological phenomenon poised between heaven and earth, are sometimes over 400 meters high and enchant visitors from across the world when approaching the Kalambaka region. The uniqueness of Meteora that break the monotony of the vast Thessalian plain lies not only in the rocks themselves, but in the fact that on them we have rare monastic architecture that is inhabited. According to historians, the first hermits climbed the rocks of Meteora in the late 11th and early 12th century and formed a rudimentary anchorite settlement, the Hermitage of Doupiani or Stagoi.

The same sources inform us that the first monasteries were built around the 14th century and many of them were renovated or rebuilt on their original foundations in the 16th century, a time of particular prosperity and flowering of monasticism on Meteora. In its heyday (16th-17th century) Meteora had 24 monasteries, of which only six are operating today. Meteora is a monument included on the UNESCO World Heritage List. The monastic City of Meteora has a rich and unique treasure trove of relics, texts, documents and icons; an inestimable wealth of cultural heritage.

Our journey starts from the Monastery of Ypapanti, which today is uninhabited and belongs to the Monastery of the Great Meteoron. The frescoes are one of the most important groups of paintings of the second half of the 14th century and the earliest in the Meteora monasteries. The founding of the Monastery of the Great Meteoron or the Transfiguration of the Saviour, as it was later named, was a milestone in organized monasticism on Meteora. It was founded shortly before the middle of the 14th  century by Saint Athanasios the Meteorite, who was also the monastery’s first founder and organizer of a permanent monastic community. According to historians and researchers, the frescoes of 1483, in the small church which today comprises the sanctuary of the monastery’s Katholikon, are a luminous group of paintings representing the art of the late Palaiologan era, shortly after the fall of Constantinople. The Monastery’s old Refectory, an architectural masterpiece of 1557, is an interesting building divided into two aisles by five columns and decorated with brick arches, vaults and groin vaults. It is restored today and  accurately recreates its function with all the sacred vessels for worship and everyday utensils worth seeing up close.

Another feature of the monastery is the old nursing home-hospital, built in 1572 which also has exceptional architecture. According to scholars, rare portable icons are kept in it, such as the diptych of the Palaiologan era whose one panel depicts the Virgin Mary and the other Christ’s Extreme Humiliation (the Man of Sorrows). The large rich collection of the Great Meteoron is completed by 640 manuscripts, documents and books dating from the 9th to the 19th century.

At the St Nicholas Anapafsas Monastery, visitors can admire its rich iconography by Cretan painter Theofanis Strelitzas Bathas in the year 1527. And our journey to the functioning monasteries of Meteora continues…

The Varlaam Monastery stands on an imposing rock, opposite that of the Great Meteoron Monastery. Remarkable buildings include the old refectory, which still serves as one, the kitchen with its rich architecture that today functions as a vestry-museum. The monastery, according to various researchers, has a rich and remarkable collection of around 290 manuscripts, since the most organized bibliographic laboratory of Meteora operated here at the end of the 16th-early 17th century. where specialized calligraphers and codex writers-and illuminators worked methodically and intensively.

In the past the Holy Trinity Monastery was reached by climbing up a rope ladder or being lifted in the traditional net. In 1925 a stairway was carved with about 140 steps that is used by today’s visitor. In the Monastery of Rousanou, there are interesting frescoes in the Katholikon painted in 1560, as well as those of the narthex. And our journey ends with the most accessible monastery of St. Stephen., which has been a convent since 1961 As it has been written from time to time, the nuns hemselves changed the convent’s old refectory into a museum where remarkable ecclesiastical relics are exhibited, such as portable post-Byzantine icons, gold-embroidered vestments and other woven textiles, carved wooden crosses, ornate silver work, metal work and much more.

Meteora with its activities that evolved over the centuries contributed to preserving the Orthodox monastic tradition.