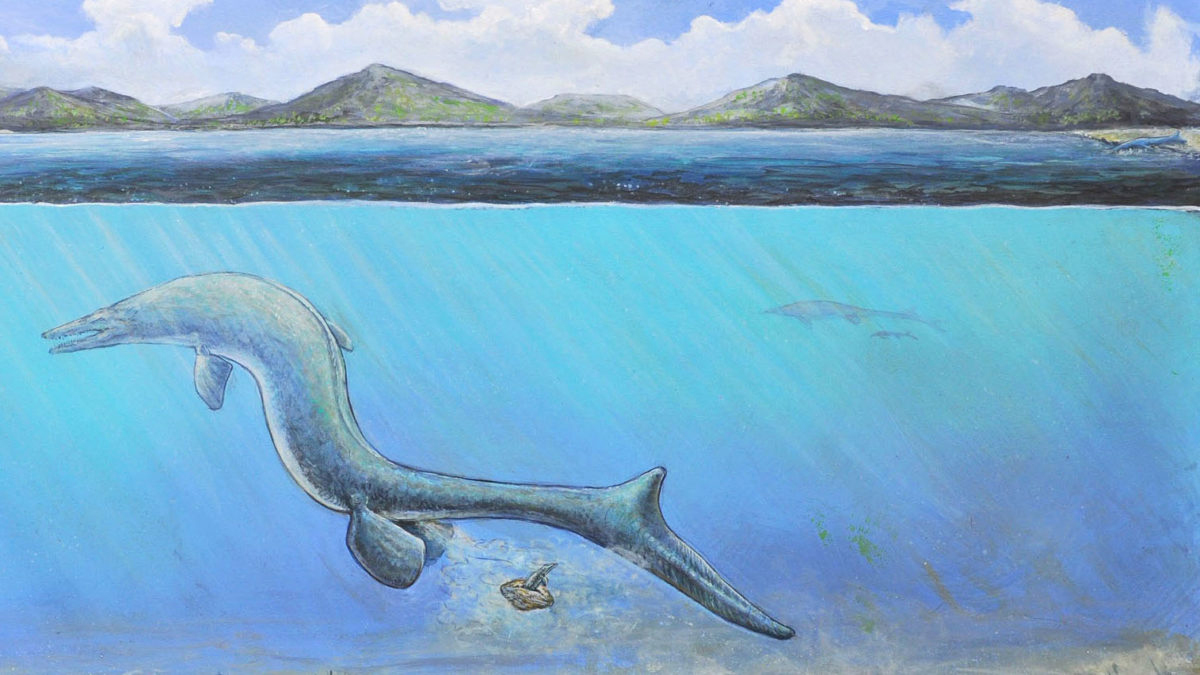 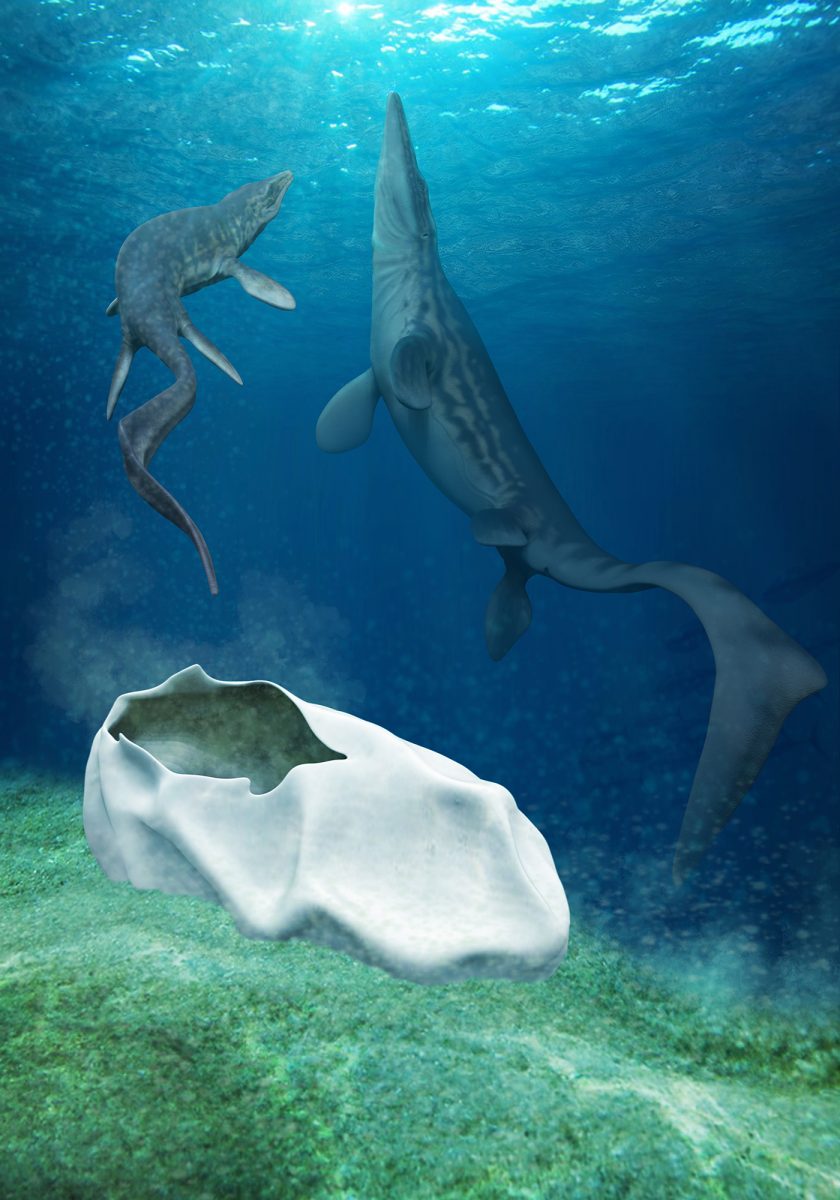 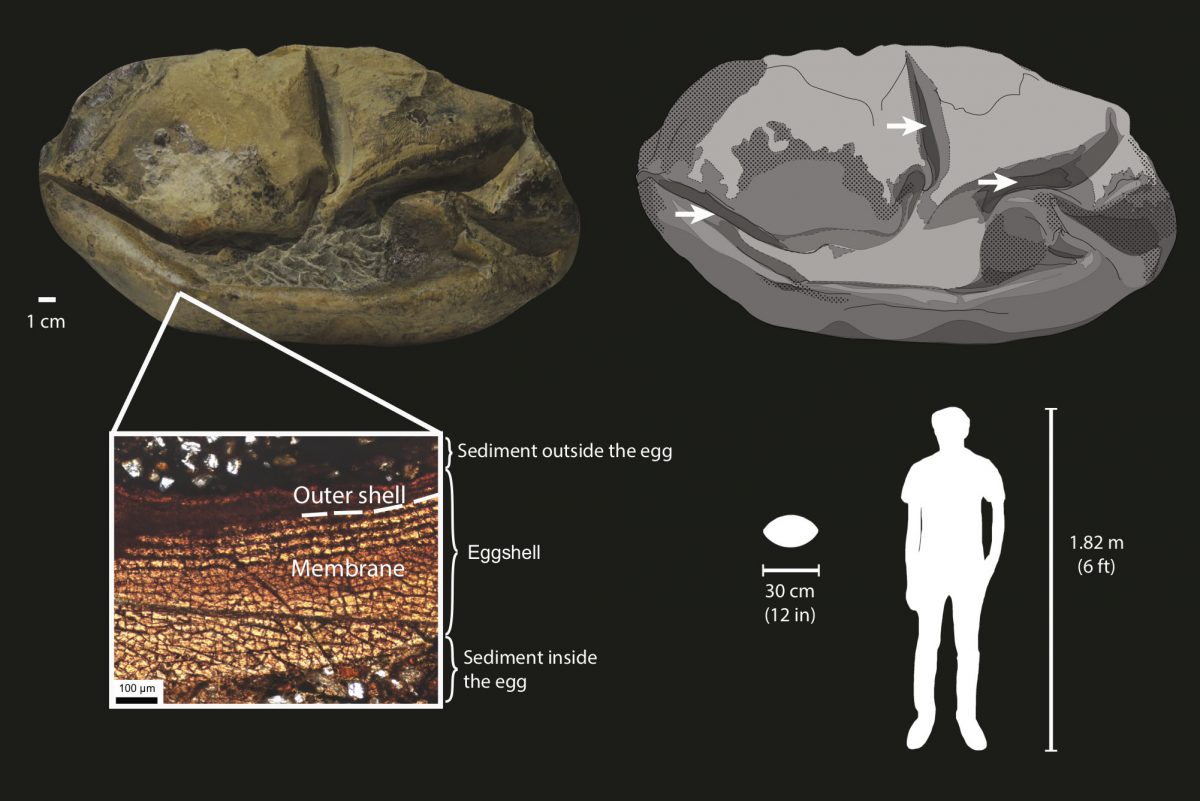 Big Antarctica egg might belong to an extinct sea lizard

It is soft-shelled and is 66 million years old

In 2011, Chilean scientists discovered a mysterious fossil in Antarctica that looked like a deflated football. For nearly a decade, the specimen sat unlabeled and unstudied in the collections of Chile’s National Museum of Natural History, with scientists identifying it only by its sci-fi movie-inspired nickname – “The Thing.”

An analysis led by researchers at The University of Texas at Austin has found that the fossil is a giant, soft-shell egg from about 66 million years ago. Measuring in at more than 11 by 7 inches, the egg is the largest soft-shell egg ever discovered and the second-largest egg of any known animal.

The specimen is the first fossil egg found in Antarctica and pushes the limits of how big scientists thought soft-shell eggs could grow. Aside from its astounding size, the fossil is significant because scientists think it was laid by an extinct, giant marine reptile, such as a mosasaur — a discovery that challenges the prevailing thought that such creatures did not lay eggs.

“It is from an animal the size of a large dinosaur, but it is completely unlike a dinosaur egg,” said lead author Lucas Legendre, a postdoctoral researcher at UT Austin’s Jackson School of Geosciences. “It is most similar to the eggs of lizards and snakes, but it is from a truly giant relative of these animals.”

A study describing the fossil egg was published in Nature on June 17.

Co-author David Rubilar-Rogers of Chile’s National Museum of Natural History was one of the scientists who discovered the fossil in 2011. He showed it to every geologist who came to the museum, hoping somebody had an idea, but he didn’t find anyone until Julia Clarke, a professor in the Jackson School’s Department of Geological Sciences, visited in 2018.

“I showed it to her and, after a few minutes, Julia told me it could be a deflated egg!” Rubilar-Rogers said.

Using a suite of microscopes to study samples, Legendre found several layers of membrane that confirmed that the fossil was indeed an egg. The structure is very similar to transparent, quick-hatching, eggs laid by some snakes and lizards today, he said. However, because the fossil egg is hatched and contains no skeleton, Legendre had to use other means to zero in on the type of reptile that laid it.

He compiled a data set to compare the body size of 259 living reptiles to the size of their eggs, and he found that the reptile that laid the egg would have been more than 20 feet long from the tip of its snout to the end of its body, not counting a tail. In both size and living reptile relations, an ancient marine reptile fits the bill.

Adding to that evidence, the rock formation where the egg was discovered also hosts skeletons from baby mosasaurs and plesiosaurs, along with adult specimens.

“Many authors have hypothesized that this was sort of a nursery site with shallow protected water, a cove environment where the young ones would have had a quiet setting to grow up,” Legendre said.

The paper does not discuss how the ancient reptile might have laid the eggs. But the researchers have two competing ideas.

One involves the egg hatching in the open water, which is how some species of sea snakes give birth. The other involves the reptile depositing the eggs on a beach and hatchlings scuttling into the ocean like baby sea turtles. The researchers say that this would demand some fancy maneuvering by the mother because giant marine reptiles were too heavy to support their body weight on land. Laying the eggs would require the reptile to wriggle its tail on shore while staying mostly submerged, and supported, by water.

“We can’t exclude the idea that they shoved their tail end up on shore because nothing like this has ever been discovered,” Clarke said.

The study’s other co-authors are Clarke, Jackson School graduate students Sarah Davis and Grace Musser, and Rodrigo Otero and Alexander Vargas of the University of Chile. Rubilar-Rogers led the expedition organized by the Chilean Antarctic Institute (INACH) in the Antarctic Peninsula, where he and Otero discovered the fossil.

The Howard Hughes Medical Institute’s Science Education Program and the National Research and Development Agency of Chile funded the research.